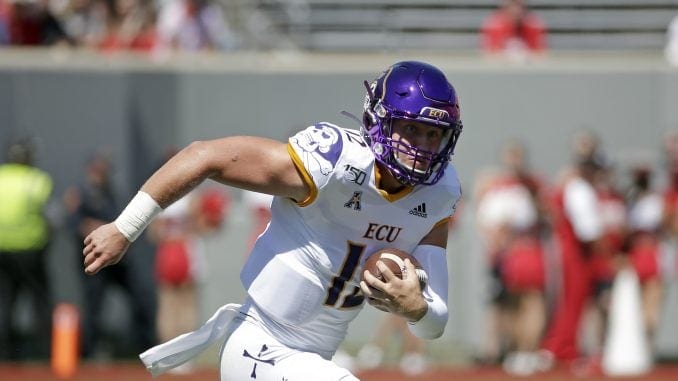 At first glance, this is a lot of points to give. But Cincinnati has really hit the gas in recent weeks, blitzing what was supposed to be their three toughest games on the schedule. SMU, Memphis, and Houston all got left in the dust by the Bearcats’ powerful combination of both offense and defense, as not one was able to come within 28 points or score more than 13 against Cincinnati.

East Carolina becomes the latest to try, which is not exactly a promising proposition. The Pirates have no trouble putting up points, but when it comes to stopping anyone, East Carolina leaves a lot to be desired. The Pirates give up 37.2 points per game and have kept just two of their six opponents under 30 points this season. With Cincinnati scoring like nobody’s business, how can East Carolina possibly keep pace with this juggernaut?

How the Public is Betting the East Carolina/Cincinnati Game

When the gamblers think that 26 points aren’t enough for you, you’ve got some serious issues. That’s precisely what’s happened, as 69 percent of tickets have come in on the Bearcats, bumping the line from -26 to -27.5. The gamblers are high on the Cincinnati defense, as the total has dropped from 56.5 to 55.5.

When East Carolina Has the Ball

If you watched much football in the 1990s, you might remember the name Ricky Proehl, a talented wide receiver who spent 17 years in the NFL. He’s the father of East Carolina’s top receiver, Blake Proehl, a junior who leads a talented trio of pass-catchers. Tyler Snead has actually caught more passes than Proehl this season, and together, they give East Carolina and quarterback Holton Ahlers some real matchup problems to exploit.

They’ll have to play great to get a result here because East Carolina doesn’t have a great rushing attack, and teams don’t really run the ball on Cincinnati anyway. The Bearcats hold teams to under 100 yards a game on the ground, so don’t expect to see a lot of Rahjai Harris in this contest. The freshman is showing signs of becoming an excellent back for East Carolina, but Tulane was able to shut him down, and the Green Wave’s defense is nowhere near the level of the Bearcats’ run defense.

Plus, East Carolina is likely to trail fairly early in this game, so it’s likely going to have to go the air anyway in order to try to stay in the game. Expect the Pirates to throw it a lot as they try to play catch-up.

COLLEGE KID BONUS: DEPOSIT $25, USE PROMO CODE ROOKIE200 AND THEY’LL GIVE YOU AN EXTRA FIFTY BUCKS AT INTERTOPS SPORTSBOOK!

For a team that’s had no problem scoring as of late, the Bearcats don’t have the kind of eye-popping numbers that you might expect. In fact, Cincinnati gets more yards on the ground than it does through the air, as the Bearcats average 238.5 yards per game on the ground. It’s not exactly a modern offense, but it gets the job done.

Gerrid Doaks is the main ball-carrier with 511 yards on the season, and quarterback Desmond Ridder makes almost as many plays with his legs as he does with his arm. Even third option Jerome Ford has more rushing yards than top receiver Jayshon Jackson does receiving yards. The way that Cincinnati wins is by getting its dominant defense to set up short fields and using its offense to wear down the opposition and create easy touchdowns. The Bearcats will not wow anyone with quick-strike ability, but they will methodically move down the field and will not beat themselves, a combination that’s proven quite effective to this point in the season.

Maybe East Carolina should petition the American to stop giving it home games because the Pirates are actually pretty effective when they go on the road. They’ve covered the number in their past five contests as a road underdog and are 5-2 ATS in their past seven away from Greenville. They’ve also brought a lot of points with them, as the over has hit in five of the Pirates’ past six on the road.

However, that hasn’t applied when it’s been time to visit Cincinnati. The Pirates have failed to cover in any of their past five visits to Nippert Stadium (to be fair, only the past three have taken place since 2004), and Cincinnati has been a cover machine in its past six league games, covering the number in five of them. As good as the Bearcats have been on defense this year, these teams have tended to play shootouts. The past three meetings have all topped 60 points, including last year’s 89-point contest in Greenville.

In terms of wind and precipitation, the teams picked the right day to play this game, as neither will be a factor. Winds will blow northeast at five miles an hour, and rain shouldn’t occur. However, cold temperatures will come to southwestern Ohio, with temperatures around 30 degrees expected for kickoff.

Cincinnati has been pounding teams into submission lately, but this seems to be a few points too many. The Bearcats are a much better team than the Pirates, but with a trip to Central Florida coming up next week, this is a classic look-ahead spot. Plus, Cincinnati has a tendency to play up to its competition and slack off a little against teams it should beat. The two games where the Bearcats failed to cover were against FCS Austin Peay and a bad South Florida squad.

East Carolina is in the mid-tier of teams in the American, which means the Pirates shouldn’t get the attention from the Bearcats that SMU or Memphis or Houston warranted. Cincinnati shouldn’t be threatened in this contest, but this feels more like a game the Bearcats win by 17 or 20 points, not 27. Give me the Pirates and the points. Bet YOUR picks and ALL your sports bets at -105 EVERY DAY (instead of the -110 you’re currently paying) at BetAnySports Sportsbook! Making the switch to reduced vig betting will save you thousands of dollars over the long haul!