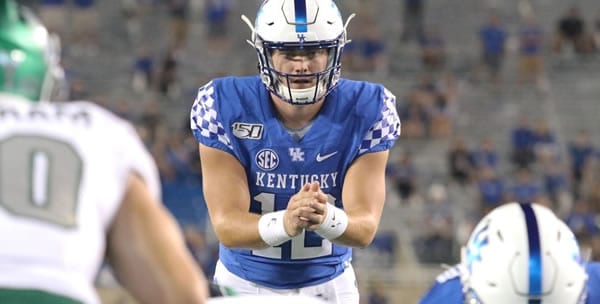 Kentucky eased past Eastern Michigan 38-17 for its second victory of the season over a MAC opponent, but it came at a severe cost, as the Wildcats lost quarterback Terry Wilson for the season. Florida cruised to a 45-0 win over FCS opponent Tennessee-Martin that was never really in doubt.

Last year in Gainesville, the Wildcats ended the longest losing streak in the country against one opponent, beating Florida 27-16 to end a 31-game losing streak against the Gators. Kentucky hasn’t beaten Florida in Lexington since 1986, a 10-3 Wildcats victory.

How the Public is Betting the Florida/Kentucky Game

The line opened at Florida -7, and an over/under of 50.5, and the line increased to Florida -8 as the news broke that Wilson was out for the season.

Florida:
Defensive back C.J. Henderson injured his ankle against Tennessee-Martin and is doubtful, while utility player Kadarius Toney injured his wrist against the Skyhawks and is likely out multiple weeks.

Kentucky:
Quarterback Terry Wilson tore his patellar tendon in his left knee and is out for the season.

More Picks: Buckeyes at Hoosiers Against the Spread Prediction >>>

Florida’s offense was supposed to take a big step forward this season, but so far, the Gators haven’t shown that progress. On the one hand, Feleipe Franks has done a much better job of making decisions, as his completion percentage sits just under 78 percent through two games. On the other, his yards per pass is only 9.7 yards per completion, which isn’t good enough to win games in most offensive systems.

The one exception would be when a team’s got a great ground game, but Florida hasn’t come close to showing that. No Gator has amassed 100 rushing yards for the season to this point through two games, and the Gators don’t have the excuse of playing two blowouts because one of their games was a four-point win over Miami. Lamical Perine leads the Gators with 93 yards on 20 carries, and if those numbers are indicative of the kind of day he’ll have against Kentucky, this won’t end well for Florida.

When Kentucky Has the Ball

So what do the Wildcats do now that Wilson is done for the year? Now they turn to Sawyer Smith, who was previously the starter at Troy. Smith isn’t a stranger to big moments, nor is he a stranger to replacing an injured quarterback, as he became the starter halfway through the season when the Trojans lost Kaleb Barker to an injury. Smith became the MVP of Troy’s bowl game and then chose to transfer during the offseason, with his chance coming much sooner than anyone anticipated. Against Eastern Michigan, he tossed two touchdown passes, showing he could move the offense.

To get a win over Florida, Smith will need his backs to step up. Last year, Kentucky rode Benny Snell to victory in the Swamp, but with Snell gone, the Wildcats are left to lean on Asim Rose and Kavosiey Smoke to carry the load. Both backs have performed well against Toledo and Eastern Michigan, but Florida presents a tougher challenge than a MAC defense.

Both of these teams have done well for themselves in September, as Kentucky and Florida are both 4-1 against the spread in their past five September games. The one for Florida was Kentucky, as the Gators went into last year’s game favored but came out with an 11-point loss when Kentucky grabbed control of the game in the third quarter. Florida also tends not to score a lot of points in the first full month of the season, as the under has hit in four of Florida’s past five September contests. That fits well with Kentucky’s recent performances against SEC foes, as the under has hit in seven of the Wildcats’ previous eight conference games.

Lexington appears like it’s going to feel more like the Swamp on game day, as temperatures are projected to reach 89 degrees on a partly cloudy day in the Bluegrass State.

With a healthy Terry Wilson, I’d have been all over Kentucky getting eight points at home, especially given how weak Florida’s offense has looked compared to expectations. But Sawyer Smith is an unknown at the SEC level, and Florida’s defense is for real even if its offense leaves a lot to be desired. Truthfully, the best bet on the board is probably the under, as it seems pretty likely that neither of these offenses is going to get started in this contest and the total is pretty high for a pair of teams that still have more questions than answers on that side of the ball. If you have to bet one team over the other, I will side with the Gators because they’ve got the more experienced defense and a bit less uncertainty on offense.