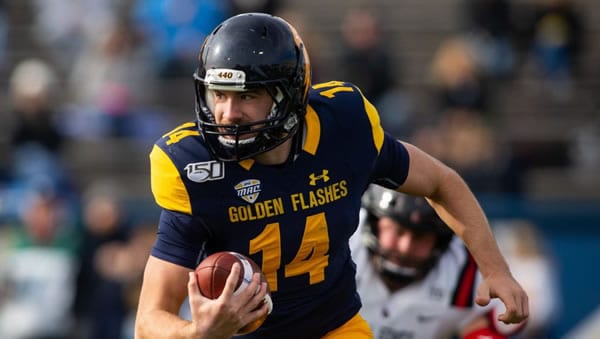 We’re back into divisional play for early-week MACtion, and it seems like Bowling Green is every bit as awful as it was a season ago. Dating back to last season, the Falcons suffered their fourth consecutive loss by at least 35 points, a margin that Bowling Green wound up on the wrong end of quite frequently last season. In fact, if you’d simply taken Bowling Green’s opponent minus-35 last year in every game against an FBS opponent, you would have cashed in seven out of 11 games.

One of those seven was against Kent State, which used to get beaten pretty regularly in this matchup but unloaded on the Falcons last year by a 62-20 margin, their biggest win in the series since 1935. If the Golden Flashes hadn’t gone through a tough three-game slog last season that saw them fall to Ohio, Miami-Ohio, and Toledo by seven points or less each, they’d likely have won the MAC last season. But they come into this matchup riding a five-game winning streak and seemingly picking up where they left off after a hard-fought win over Eastern Michigan. The Flashes’ past five wins have all been by 10 points or less, but all of those games were against teams of much better quality than the Falcons. Can Kent State keep the wins coming and lay the wood to a lesser foe?

How the Public is Betting the Kent State/Bowling Green Game

The game hasn’t been on the board long enough for the public to affect the line.

Kent State:
Linebacker Juan Wallace is ineligible and out for the season.

Bowling Green:
Running back Andrew Clair is questionable with an undisclosed issue.

A year ago, Dustin Crum was able to do whatever he wanted in this matchup. At the end of the day, Crum finished with three touchdown passes against just five incomplete passes, tossing for 310 yards in a game that Kent State led by more than 30 points after three quarters. Of course, when you have two running backs go over 100 yards in the contest, that says that either the other team has sold out to stop the pass or just can’t stop you no matter what you try to do, and for Kent State, it was the latter. The Flashes scored on their first four drives of the game against the Falcons last season, ending up with an unthinkable 750 yards of offense.

Crum is back, and so far, it looks like Isaiah McKoy and Dante Cephas are his targets of choice. Against Eastern Michigan, McKoy snagged eight passes for 104 yards, and he’ll likely be called upon to stretch the Falcons’ secondary. The secondary would seem to be the strong part of the Bowling Green defense given that the Falcons only gave up 214 passing yards to Toledo, but that’s quite deceiving. Toledo is a run-first team that has long preferred to keep the ball on the ground as long as it’s working. Kent State has an experienced, accurate quarterback in Crum, who can pick apart most MAC secondaries. If the Flashes want to throw to win, they’ll be able to do exactly that.

The Falcons have been a raging disaster on offense for a while, scoring 10 points or less in three of their past four games. Against Toledo, it was more of the same, as Matt McDonald couldn’t hit Lake Erie in the opener, completing just eight of his 30 pass attempts and getting intercepted twice. Worse, Bowling Green couldn’t even mount a competent rushing attack to balance things out, as Andrew Clair and Bryson Denley combined for less than three yards per carry.

The one real threat the Falcons have on the roster is wide receiver Julian Ortega-Jones, who caught three passes for 61 yards against Toledo, but almost all of that came on one play. This is an offense that can’t go deep and can’t move the ball a little at a time, leaving them with no real options as far as attacking. Put simply, there’s a reason that this offense has scored 10 points or less in seven of its past 13 contests.

Going on the road has tended to be a boost in this battle of the Ohio Turnpike, as the visitor has covered in six of the past eight meetings. That fits well with the kind of football team Kent State is, as the Flashes have covered in four consecutive road games. Meanwhile, Bowling Green has been cannon fodder no matter where it plays, as the Falcons have covered in just six of their past 26 home games and have failed to cover in four consecutive games in the MAC. The one exception is Akron, one of the few teams in the nation that’s actually as poor as the Falcons.

Wind and weather could become a factor here, as the wind is expected to come at 13 miles per hour blowing southwest, with late showers in the forecast. Temperatures are expected to fall into the mid to low 50s during this game.

Every factor is pointing in two directions here: Kent State and the under. The total counts on Bowling Green doing some scoring, and the way the Falcons looked in their opener, that appears impossible. Ten of the Falcons’ past 13 games have gone under this total, and Bowling Green’s past eight losses in the MAC (the Falcons have lost eight of their last ten league games) have all been by 18 points or more, which says you should only pick them if you think they’ve got a chance to win the game outright.

I can’t see any chance of that happening. Give me the Flashes. Bet your Week 11 college football picks FREE by taking advantage of a 100% REAL CASH bonus on your first deposit of $100 to $300 at MyBookie Sportsbook!