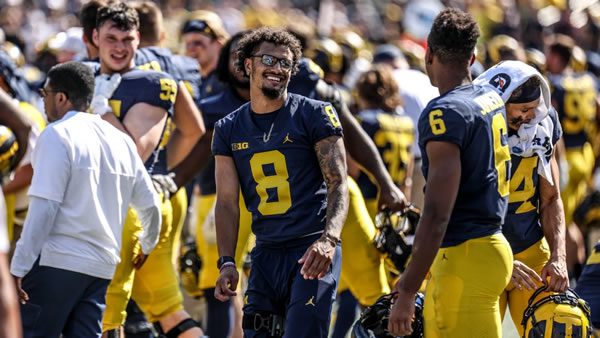 Point Spread: Mich -26/Rut +26 (You can make the Wolverines a -6 favorite by inserting them into a massive 20 point college football teaser found at Wagerweb Sportsbook!)

The Wolverines come into the game with an overall record of 8-0. This strong play includes
going 5-0 in Big Ten action. This season, the Wolverines have an ATS mark of 4-3-0 while being
favored in every game. Their over-under record sits at 1-5-1 on an average point total betting
line of 48.56.

In their most recent game, the Wolverines defeated Michigan State by a score of 29-7. But,
they were unable to grab the ATS win, as their 22 was not enough to cover the spread. In the
game, Michigan finished with 1 touchdown through the air while throwing for 167 yards. On the
ground, the team ended with 1 rushing touchdown while averaging 5.3 yards per carry for a total
of 276 yards.

Heading into the matchup, J.J. McCarthy has an overall passer rating of 115.1 on a total of
1464 yards. Thus far, he has thrown for 10 touchdowns and 2 interceptions. Wide receiver Ronnie
Bell has come up with the most production for the team, with a total of 482 receiving yards. The
Wolverines have turned to running back Blake Corum a total of 179 times for a total of 1078
rushing yards.

Rutgers is coming off a 31-point loss to Minnesota by a score of 31-0. The Scarlet Knights
entered the game as 14.0 point home underdogs, making this an ATS loss. For the game, Rutgers
threw for 86 yards but did not come up with a passing touchdown. Their overall completion
percentage came in at 37.5%. In the rushing game, the Scarlet Knights did not find the endzone,
while finishing with a total of 48 yards on the ground.

Quarterback Evan Simon comes in the game having completed 71 of 123 passes for a passer rating
of 65.77. Receiver Sean Ryan heads into the game, as the team’s leader in receiving yards, with a
total of 269. The Wolverines have turned to running back Samuel Brown V a total of 86 times for a
total of 374 rushing yards.

Across their 5 previous home games, Rutgers has an ATS mark of 3-2-0. Their straight-up record
in these matchups was 2-3-0 while averaging 24.6 points per game.

So far, the Wolverines are averaging 41.0 points per game on offense, which is good for 8th
most in college football.

On offense, the Wolverines will be tested against a Rutgers defense allowing just 22.5 points
per game. If the Wolverines are going to find success, they will need to continue to perform well
on third downs as they are converting at a rate of 48.0%.

Although the Wolverines have turned to the passing attack at a below-average rate this season,
they have an opportunity to find success through the air vs a Rutgers defense allowing teams to
complete passes at a rate of 52.62%.

So far, Michigan has relied heavily on the ground game, as they rank 17th in attempts per
game, with an average of 43.12. This heavy usage has led to an average of 246.0 rush yards per
game, placing them 5th in the NCAA. This week, the Wolverines will be facing a Rutgers defense
that is ranked 38th in rush yards allowed per game. So far, they are averaging 207.5 yards per
game when facing top 25 rush defenses.

Heading into this week’s matchup, the Scarlet Knights will look to improve their offensive
output, as they are ranked just 114th in the NCAA in points scored.

Offensively, Rutgers will need to do a better job picking up first downs in this week’s
matchup, as not only are a below-average team in 3rd down conversion percentage but are facing
off against one of the top scoring defenses in the NCAA.

A key to the Scarlet Knights chances in this matchup will be their ability to find some
measure of success in the passing game. Throughout the season, they are a below-average unit in
pass attempts per game and will be facing a Michigan defense that is allowing opponents to
complete passes at a rate of just 61.27%.

This season, the Rutgers offense has struggled in the run game, averaging just 150.62 yards
per game on the ground. In terms of attempts, they rank 46th in the NCAA at 38.25 per contest.
This week, the Scarlet Knights will be facing a Michigan defense that is 6th in rush yards
allowed per game. So far, they have averaged 72.0 yards per game when facing top 25 rush
defenses.

Michigan -26. Did you know that you could be betting your favorites teams with a free half point and a 125% real cash bonus at one of the best sportsbooks on the web? Take advantage of this killer offer by inserting bonus promo code PREDICTEM when you sign up at GTBets Sportsbook!