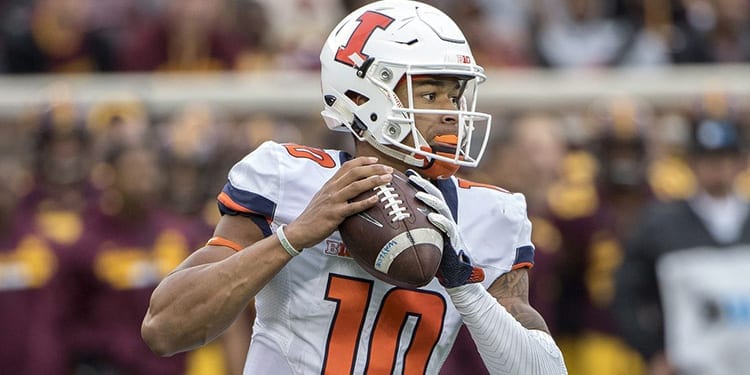 The Illinois Fighting Illini will host the #9 Penn State Nittany Lions at Memorial Stadium on Saturday, September 22nd, 2018 for a B1G conference collision. The festivities are set for a kick off 12:00 PM ET to be aired on the B1G Network. The Oskie-Wows welcome PSU to Champaign, Illinois where the Fighting Illini have played solid football so far this season. In the series between these two conference foes, the two teams have split the last two meetings. Illinois won the last meeting here in Champaign in 2014 when they orchestrated a 16-14 upset of the Nittany Lions. Overall, PSU has won eight of the last ten fixtures between these two combatants.

The Illini come in off a 25-19 loss at home against the South Florida Bulls last Saturday. Though it was the first loss of the season, it nonetheless produced some encouraging signs for Head Coach Lovie Smith. Illinois won just two games in 2017 and went winless in the B1G West. South Florida, it is worth mentioning came in as a two-touchdown favorite after it defeated Georgia Tech at home as a field goal pup the preceding week.

Prior to their loss against the Bulls, the Illini own wins against Kent State and Western Illinois to ground off their schedule.

Despite losing playmaker Saquon Barkley to the NFL Draft, the Nittany Lions continue to win. Dating back to 2017, PSU has now seven consecutive outings. Since he has arrived in Happy Valley Coach James Franklin has certainly revamped the culture. Penn State was able to win a B1G Championship under his tenure and last year for the most part were favored for the College Football Playoff. Though Penn State would come up short they would still delight in a Fiesta Bowl victory over Washington to close out the campaign.

In 2018, Penn State opened with a scare when it required overtime to vanquish pesky Appalachian State despite closing as a 23.5-point favorite. Since then, Penn State has rolled past opponents defeating both Pitt and Kent State by a combined margin of 114-16. Very simply, the Nittany Lions have been getting it done on both sides of the ball. Quarterback Trace McSorley has empowered the offensive unit to score an average of 53.5 points per game, placing PSU fifth in the country currently.

First and foremost, the Illini have a wrinkle they can utilize to keep this game close and neutralize the Penn State attack, their rushing offense. Penn State’s defense surrenders an average of 148.3 yards per game on the round (68th nationally). This is good news for a Illinois running game that has produced a stellar 244.3 yards per game through the rushing department (23rd nationally). In the match-up of X’s and O’s, this in itself creates a lot of value as the game could be shortened. That in itself makes the prospect of Penn State covering by four-plus touchdowns that more daunting as they may not have enough time to build such a lead.

PICK: Will Notre Dame’s issues on offense keep them from covering -7?

Outside of the match-up, Illinois will also enter this contest with an emotional edge as they will be playing this fixture at home in front of a crowd that will be fired up as they recollect the events of 2014. Illinois has been looking to resurrect its football program from the dead and nothing could ignite such a renaissance more than re-creating what transpired here last time these two teams met. Many upper classmen on UI will be fueled by the narrative of the upset and will certainly come into this contest looking to punch Penn State in the mouth and make a statement.

In addition to the intangibles, the Nittany Lions are now one of the blue bloods of college football. As a rule of thumb, when you back PSU you can expect to pay a premium. If you toss in the facts that Penn State holds an undefeated record and shown an ability to cover at will in its last two contests, that propensity is not greater. The Nittany Lions have inflated their stock to a point where takers will be prone to an overlay. The fact remains, Illinois has already tied last year’s win total and are playing with house money here as everything they do from this point forward is only furthering its goals and objectives. But let’s call what it is here, Illinois is going to be headhunting in this game. Penn State will likely struggle and get placed on their back heels by an upstart Illini team. Take the points. Discuss this pick in the Predictem college football forum!

Kevin West: “When I think NFL playoffs, I think New England Patriots. How can you not? They’ve been a mainstay in post-season play for as long as I can remember. Also in that picture in my mind, is Foxboro. The Pats seemingly always have home field advantage, don’t they? So leaves one to wonder how Belichick, Brady and Co. have fared away from home. The answer is somewhat shocking. They’re 3-4 both straight up and against the spread.” Does that make you think twice about backing the Pats? West gives his pick.

NE Patriots vs. KC Chiefs Pick On The Over/Under