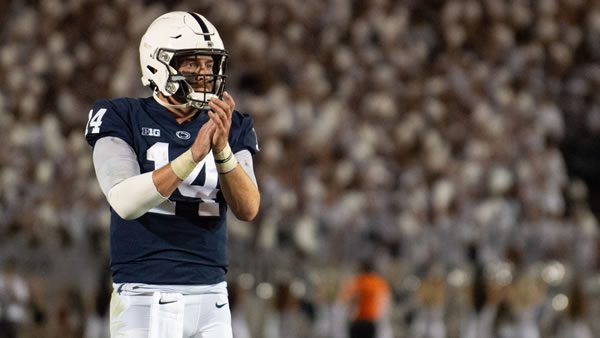 The Nittany Lions are coming off a 44-31 loss to Ohio State. But they did manage to cover the
spread as the 15.5-point underdogs. The team finished the game by throwing for 3 touchdown
passes. Overall, the Nittany Lions had 371 passing yards on a completion percentage of 68.1%. On
the ground, the team ended with 1 rushing touchdown while averaging 3.4 yards per carry for a
total of 111 yards.

The team’s leading quarterback is Sean Clifford, who comes into the game with a passer rating
of 98.88. Heading into this week’s game, he has a total of 1816 passing yards. Wide receiver
Parker Washington has come up with the most production for the team, with a total of 567
receiving yards. The Nittany Lions have turned to runing back Nicholas Singleton a total of 95
times for a total of 597 rushing yards.

The Hoosiers head into this week’s matchup with an overall record of 3-5. So far, they are
just 1-4 in Big Ten play. This season, the Hoosiers have been favored in 3 games while posting an
ATS mark of 3-5-0. Their average over-under betting line is 55.56 leading to an over-under record
of 4-4-0.

Indiana is coming off a 7-point loss to Rutgers by a score of 24-17. The Hoosiers entered the
game as 3.0-point home underdogs, making this an ATS loss. To finish the game, the Hoosiers had a
yards per completion figure of 8.8 and a total of 210 yards through the air. However, they did
not come up with a touchdown pass through the air. On the ground, the team ended with 1 rushing
touchdown while averaging 3.3 yards per carry for a total of 62 yards.

So far, quarterback Connor Bazelak has a passer rating of 71.55 while completing 208 of his
379 attempts. Receiver Cam Camper heads into the game, as the team’s leader in receiving yards,
with a total of 569. In the run game, Shaun Shivers has accumulated 405 on 103 attempts to lead
the team.

Against the spread, the Nittany Lions have gone 5-5-0 over their last 10 games. Straight up
they have a record of 6-4-0. Their last 10 over-under record comes in at 7-3-0. Penn State has a
positive scoring differential in these games, averaging 30.2 points per game and allowing
23.0.

Through their last 5 road contests, the Nittany Lions offense has averaged 26.0 points per
game while allowing an average of 27.6. Penn State posted an overall record of 2-3-0 while going
2-3-0 ATS.

Across their 5 previous home games, Indiana has an ATS mark of 3-2-0. Their straight-up record
in these matchups was 3-2-0 while averaging 26.8 points per game.

Heading into the game, the Nittany Lions are ranked 39th in points per game and is facing an
Indiana defense that is allowing an average of 30.62 points per contest.

One aspect of the game that could benefit a Penn State offense that struggles to generate big
plays in the passing attack is that they are facing off an Indiana defense ranked 104th in
opponent completion percentage. In addition, the Hoosiers are just 98th in sacks per game.

So far, the Penn State offense is averaging just 170.0 yards per game on the ground. This
production has come on an average of 35.5 rush attempts per game (75th). This week, the Nittany
Lions will be facing an Indiana defense ranked 103rd in rush yards allowed per game. This year,
they have averaged 195.2 yards per game when facing defenses ranked outside the top 50.

Heading into this week’s matchup, the Hoosiers will look to improve their offensive output, as
they are ranked just 93rd in the NCAA in points scored and are matched up with a Penn State
defense that is allowing an average of 22.0 points per game.

So far, the Indiana offense is averaging just 80.38 yards per game on the ground. This
production has come on an average of 29.25 rush attempts per game (124th). This week, the
Hoosiers will be facing a Penn State defense that is ranked 66th in rush yards allowed per game.
So far, they are averaging 123.5 yards per game when facing defenses ranked outside the top
50.

Hoosiers +13. Bet your Week Ten NCAA football prediction for FREE by scoring a massive 125% real cash bonus up to $400 when you use bonus code PREDICTEM at GTBets!