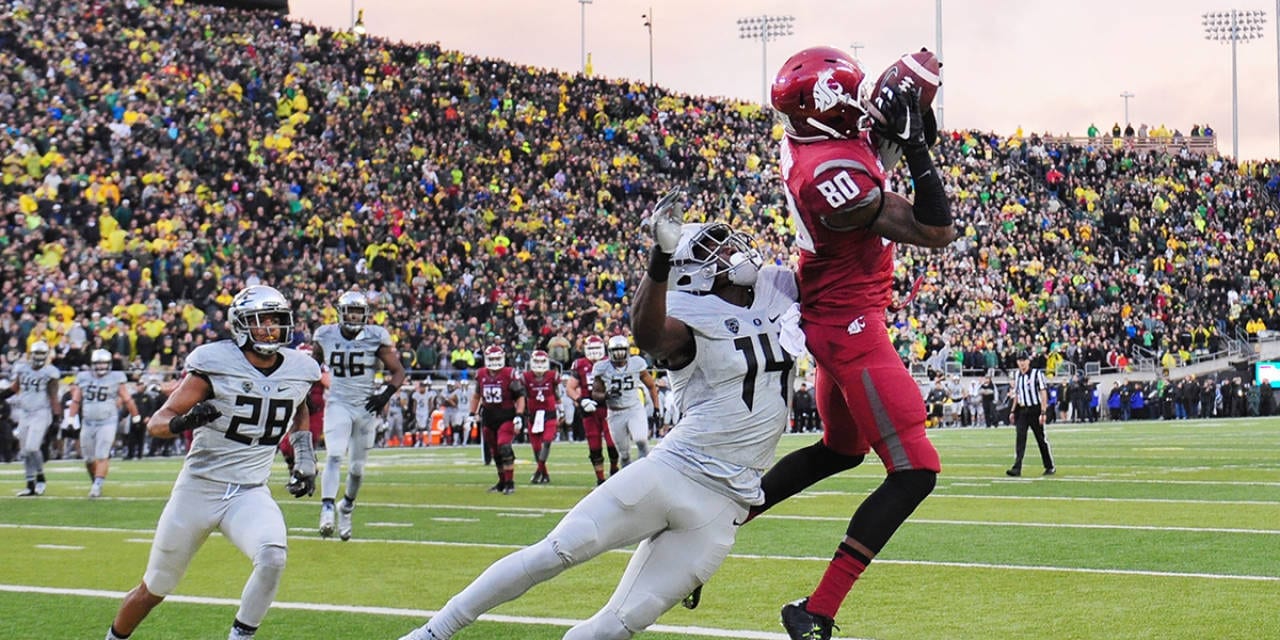 The Washington State Cougars are known for their ability to seek out and recruit gun-slinging QBs. Graduate transfer QB Gardner Minshew led the Cougs offense last Saturday to a 41-19 win. Minshew threw for 319 yards and three touchdowns. Cougs Head Coach Mike Leach may have found his replacement for Luke Falk as Minshew’s numbers are already impressive albeit against a weaker team. Minshew has already drawn some character calls from his teammates and fans as the “Uncle Rico” (Napoleon Dynamite movie character) of college football QBs—Minshew and his mustache should be just fine if he continues to run the WSU offense as well as he did in the second half last week. Will San Jose State even have a chance on the road in Martin Stadium? I don’t think they can win but what about that 33 point spread?

The Cougars are young and explosive: Washington State has a lot of new faces on offense and they are talented. WSU runs the Air-Raid offense better than anyone in the country and not only do they utilize a variety of receivers they also have a solid crew of running backs who can catch the pigskin and take it to the house. True freshman RB, Max Borghi, who was the Colorado High School Player of the year proved what he could do on the field as he had a 6-yard catch and run TD and another 14-yard scamper for his second score in the game. Borghi is a great fit at WSU and in the system, he has all the tools. If you watched his post-game interview you saw he is well spoken and gives his teammates credit for his success—a great team guy which is a recipe for success on the field and in life. The Cougars should have no problem putting points on the board against the Spartans.

San Jose State is over-matched: This contest might get ugly quick. San Jose State gave up 44 points last week in their loss to the UC-Davis Aggies. If they allowed 44 points to a lower level program just imagine what will happen this Saturday night in the Palouse. Again, this should be a classic pancake contest and easy W for WSU but crazy things happen in college football every week! The Spartans are not the same caliber as their PAC 12 opponent and it will show at just about every position.

The Key to this Matchup: We like the Cougars all the way in this contest. The Cougs worked out some kinks last week in Wyoming as they sputtered at times in the first half but like most good teams do—they adjusted and made plays in the second half running away from Wyoming by 22 points. The offense should continue to improve as the guys become more comfortable working the system and schemes. Defensively the Cougs looked decent although young. This will be a work in progress for the Cougs to tighten things up and get better reads and pressure on the opposing QB. WSU should take care of business this week in route to their second win of the season and keep fine-tuning for the more challenging teams down the road. The Cougs come out fired up in their first home opener and light up the scoreboard! We like the OVER in this game.

Wilson’s Pick: We like the OVER 64. The Cougs run up the score at home! Luck to ya.