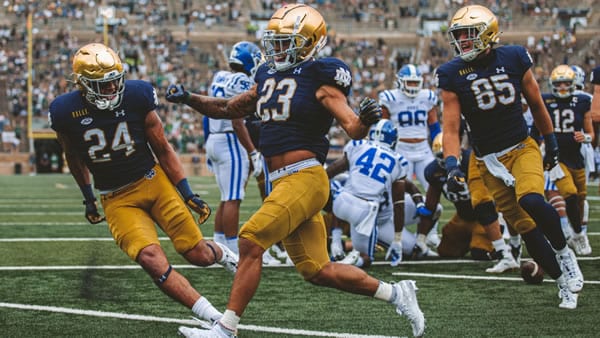 The South Florida Bulls head to north to Indiana to take on Notre Dame Fighting Irish for a Saturday afternoon showdown on the USA Network. This will be just the second all-time matchup between the teams, with South Florida having won the initial game back in 2011 in their respective season openers, 23-20.

The Bulls visit this week will mark the first time a Charlie Weis has been in South Bend with Charlie Weis Jr., who is now the new defensive coordinator for South Florida. His father infamously coached for Notre Dame from 2005-2009, getting hired after riding the coattails of Bill Belichick & Tom Brady as the New England Patriots offensive coordinator to a head job in college. He found early success at Notre Dame using players recruited by Tyrone Willingham, but never came close to reaching the potential they were expected to in 2005 and 2006 before his tenure at the school mercifully came to an end in 2009 after a 16-22 run in his final 38 games. Weis would then go on to poison the Kansas program with a 6-22 record over a three-year span for the Jayhawks that included just one conference win and only three victories overall against FBS level opponents. He was known off the field for his angry and berating manner and for his eating prowess as he would routinely claim ownership of and then eat the bread slices used to soak up the fat at the bottom of bacon buffet tray during team meals. At least he can claim victory over his gastric bypass surgery, considering he has nearly tripled in size following the procedure.

After Charlie Strong was let go after last season, South Florida hired former Clemson offensive coordinator Jeff Scott as their head coach. Scott brought in Charlie Weis Jr. to run the offense along with former Oklahoma State/Charlotte/FAU defensive coordinator Glenn Spencer to take over the other side of the ball. All three will undoubtedly have their work cut out for them taking over a team that finished last year with a 4-8 record and ranked 112th in total offense and 114th against the run.

South Florida currently has three quarterbacks on the roster that they could use at any point during the game. Sophomore UNC transfer Cade Forton wasn’t available against the Citadel, but both Jordan McCloud and Noah Johnson saw playing time. The sophomore McCloud was on the team last year while Johnson transferred from Alcorn State that won the SWAC Offensive Player of the Year award in 2018. Forton’s status against Notre Dame is still up in the air, but you can expect to again see both McCloud and Johnson getting snaps on Saturday.

One major reason for the Bulls success in week one was their ability to the run ball, eventually putting up over 300 yards on the ground, a stat that was made even more impressive considering they were missing three of their starting offensive linemen. Last season they ranked 66th in rushing compared to 116th passing, and they will hope to continue that success into their week two matchup against the Irish. Sophomores Johnny Ford and Kelley Joiner were the strength of the South Florida backfield against the Citadel. They should each get further opportunities on Saturday, while Oregon transfer Darrian Felix Jr. is also expected to make an impression as well once he gets up to speed with his new team.

How South Florida will be able to improve on last year’s lack of air success remains to be seen, especially after Michigan transfer and expected starter with the incredibly cool name Eddie McDoom opted out for the season. With McDoom gone and last year’s top target Mitchell Wilcox having graduated, the quarterbacks will be looking for senior tight end Mitchell Brinkman along with Randall St. Felix, Bryce Miller, and DeVontress Dukes to try and find open space against Notre Dame’s pass defense.

The South Florida defense is led by a pair of junior linebackers, Antonio Grier and Dwayne Boyles. Boyles led the team in tackles last season, and Grier led the team in week one against the Citadel and recorded the teams’ only sack. They will be especially needed this year after another Michigan grad transfer quit on them, this time linebacker Devin Gil. Senior Blake Green is the strength up front while cornerback KJ Sails and safety Nick Roberts anchor the defensive backfield.

DEVIL OF A TIME

Notre Dame opened their season with a 27-13 win against Duke that wasn’t over until the final quarter as they led just 17-13 after the third. They were determined to get the running game going, and that strategy eventually paid off with sophomore Kyren Williams breaking out with over 200 total yards to go along with two touchdowns. This was especially important considering quarterback Ian Book struggled with consistency throughout the day.

After ending the 2018 season with at least one interception thrown in six of his last seven games, it seemed like Book had a gotten a handle on the issue after throwing interceptions in just three games last year. The problem is his overall accuracy seems to have diminished, as his passing dropped from over 70% in 2018 to 59.3 last year, and against Duke, he never seemed to find a decent rhythm. Thankfully for Notre Dame fans, Book has the two early games against lower-tier opponents before starting play against mid-range conference foes, but if they want to have anything resembling a chance against Clemson in November, they will need a significant upgrade in performance from the quarterback position.

With Kyren Williams staking claim to the lead back position after showing his multitude of talents with 112 yards rushing and 93 receiving to go along with his two scores, the team now has an unexpected leader of the pack. Fellow newcomer Chris Tyree was second behind Williams in carries against Duke, while Jahmir Smith and Jafar Armstrong are also expected to get work amongst the Irish backs.

Notre Dame lost ample targets through the air after the 2019 season with their top three (Chase Claypool, Cole Kmet, and Chris Finke) all having moved on. Tight end Tommy Tremble led the team with five receptions, and senior wideout Avery Davis scored the only receiving touchdown in week one, but all the targets will need to step up their game, even more, to help ease Book through his accuracy issues. This includes the aforementioned Tremble and Davis along with Javon McKinley, Michael Meyer, and any of the other younger, new faces to the team looking to make a name for themselves on the top ten stage.

Notre Dame’s defense was up to the task against Duke, allowing just one touchdown for the entire game, and that was on a drive that started on the Irish 39-yard line. They will have the possibility of three different quarterbacks to prepare for and will rely on linebacker Jeremiah Owusu-Koramoa to lead the way for the defense from the middle of the field. Owusu-Koramoa was first on the team in tackles a season ago and was tops against Duke, putting up 7.5 tackles, including two for a loss, to go along with a sack/fumble recovery that sealed the game in the 4th quarter.

Thanks to early offensive issues and a struggling Ian Book, Notre Dame was unable to find the consistency needed to pull off a 19-point cover last weekend against Duke. This week they are laying a touchdown more against South Florida, and when you see the roster talent disparity and the Bulls recent issues, you can start to see why the oddsmakers made the line so high. USF has struggled in the past after finding success, going 3-13 against the spread in their last 16 games following a win, and has been pretty terrible just in general, winning just 5 of their last 19 games and two of those victories came against FCS opponents. The Bulls only chance of success is against lesser opponents (31 of their previous 33 wins were in games they were favored to win), and I see that inferiority against quality competition continuing in a big way on Saturday and by the game’s end, expect Notre Dame to come away with a resounding home victory.