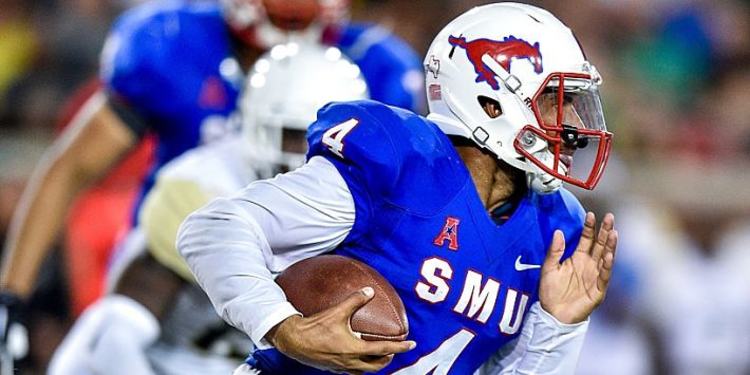 The Southern Methodist Mustangs and the Michigan Wolverines will square off in a match-up pitting the B1G against the American. SMU will travel to the infamous Big House otherwise known as Michigan Stadium when the two teams meet at 3:30 PM ET on Saturday, September 15th, 2018. The contest will be televised live from Ann Arbor on the B1G Network. The two teams only share one meeting in their program’s history and that one was back in 1963 where the Wolverines defeated the Mustangs 27-16.

Southern Methodist Struggling Out Of The Gate

The Mustangs come into this contest off a loss at home suffered against a team that they know all too well, the Texas Christian Horned Frogs. Though the two teams battle on annual basis for “The Iron Skillet” in their rivalry series, the game was anything but competitive. TCU controlled the contest from the offset and carried on to defeat the Pony Express by 30 points in the Gerald R. Ford Stadium in Dallas where the Mustangs reside. The loss once again caused Southern Methodist to fail to foster a cover despite the fact we saw enormous action on TCU cause late takers to spot an additional touchdown to the Ponies in this affair.

SMU has undergone a regime change in the off-season as their former Head Coach Chad Morris moved onto Arkansas after leading SMU to a seven-win season in 2017. Morris departed before SMU’s participation in the Frisco Bowl where they were summarily pummeled by the Louisiana Tech Bulldogs. It also marked the coronation of the Sonny Dykes era. The former Head Coach of Cal has yet to win a game in Ponyland since taking the reins.

As was mentioned previously, there was a lot of hype surrounding the Michigan Wolverines program as they headed into 2018. Several analysts had touted the Maize and Blue as abonafide B1G, College Football Playoff, and even National Championship contender. However, those expectations were put on hold when the Wolverines were defeated in South Bend by their old rival Notre Dame on a primetime Saturday night game to kick off the first week of action. Despite being predictedmany to win by double-digit margins and closing as a field goal road favorite, Notre Dame won by a touchdown.

The Wolverines bounced back with vigor in Week Two as they polish the Western Michigan Broncos at home by a score of 49-3. In doing so, the Wolverines easily surpassed a 27.5-point line and shut down the traditionally high-octane attack of the Broncos. With such a dominant performance at home, premiums may once again be imposed upon takers looking to back the Maize and Blue as they are asked to spot an additional touchdown plus two-point conversion to the visiting Mustangs. So far, we have seen an unparalleled lean on Michigan as 100% of the cash action seems to be with the Wolverines at the time this article was written. Of course, those figures can change but it clearly exemplifies the lack of faith the public has in the Mustangs which will be a presiding trend likely until this market closes.

Identifying value can often be derived from teams that no one wants a part of. SMU typifies such a squad. After getting blown out two weeks in a row (three if you want to factor in the Frisco Bowl in 2017), it seems that this program cannot get its act together. When you toss in the narrative that the Wolverines should spank the Ponies, there is very little appeal here in backing the Stangs. In situations such at these, books will toss potential takers a bone and offer inflated points with underdogs of this nature.

The fact of the matter remains that the Over/Under for this game hovers around 50, that is not a conducive figure for a cover when the favorite is laying such heavy lumber like we see at this current point. The Mustangs eclipsed the 28-point threshold offensively in 10 of their 13 bouts in 2017. SMU has a returning starter at QB that threw for over 3,500 yards in 2017 in Ben Hicks and a running back that went for over 1,000 yards on the ground in Braeden West. It’s only a matter of time before this team gets going even if it is piecing together a few junk-time scores in a rout. In which case there is plenty of backdoor potential here as well.