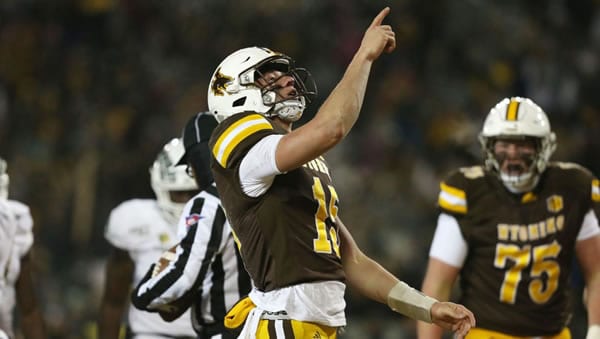 The Utah State Aggies come to Laramie to battle the Wyoming Cowboys in Mountain West Conference action on Thursday. It hasn’t been a bonanza for the fans or the bettors of these two teams, at a combined 1-6 straight-up and against the spread. Utah State came up short again on Saturday, dropping their fourth straight to open the season, losing at home to Fresno State 35-16. They now take to the road against a Wyoming team that saw their game against Air Force scratched last week due to an uptick in positive cases in the Falcons’ program. Prior to that, they lost the previous Thursday to Colorado State on the road, 34-24. Who can get the cover on Thursday?

How Bad is Utah State?

The signs are all there for a really awful Aggies team. Gary Andersen was canned before the last game, a coach in his second stint at the school, coming off a winning season and having led the Aggies to their best seasons in recent years. Considering the conditions of this season, the firing raises some red flags, even suggesting a program that is a state of disarray. And then word came down that interim coach Frank Maile has dismissed starting QB and Utah transfer Jason Shelley for a team rules violation. These are not developments that give way to hope. Not only have they failed to cover a spread this season, they haven’t even come close, missing the spread by a combined 43 points in four games. It’s a fairly-bleak situation.

It’s not like Wyoming is so good that you can write off Utah State. But one has to wonder how viable this Utah State team is in what is still a tricky road spot against a team that tends to be a little tougher at home. And while Utah St. was getting their clock cleaned by a middling MWC team like Fresno, Wyoming was at home, dug in, and resting. It might not be the ideal time for Utah State to be coming off the short week. They beat Wyoming on their field last season, but Jordan Love is gone and it’s not easy to find sources of optimism heading into this spot.

Wyoming at home is a different proposition and this would be their tenth consecutive win at home if they pulled it off. Under Craig Bohl, they have come around a lot as a program, really developing a home identity. This is the time of the season where it starts to pay off, as it could be a real bog on this field with early indications suggesting some harsh weather at game-time. And that suits Wyoming well, with their rugged run-heavy style, led by one of the best offensive weapons in the conference with Xazavian Valladay.

Get all of our game previews each week >>> Predictem's College Football Picks!

After limited time behind center last season, Levi Williams has shown signs of improvement, even in the midst of the letdown 1-2 start. At 6’5,” he’s a big package to bring down and he can be dangerous with his feet. Last week was promising with Williams’ showing some previously-unseen aerial flair at this level, going for 321 yards against Colorado State, also running in a TD. With Valladay running for 148 yards, the 24-point total might seem low, with some turnovers and penalties costing them a possible win. Still, with receivers like Isaiah Neyor and Ayden Eberhardt coming alive, it gives Wyoming the offensive dimensions that suggest they can significantly improve on last season’s performance.

Their aerial game took several steps back without Love. And Jason Shelley just wasn’t able to get much spark out of the Aggies’ passing game and we’ll see if Andrew Peasley can do any better. With Jaylen Warren and experienced Devonta’e Henry-Cole, they can run the ball fairly well, but are rarely in the position to do so as they fall into big deficits week after week. All in all, it’s been a really flat season on this side of the ball, with a lack of inspiration and overall energy and now—quarterback problems.

While they hope to get into a competitive pairing of dueling ground-attacks with Wyoming this week, the Aggies’ defense could be up against it. They are even worse on the road. Williams’ recent aerial knack could also resonate well against a Utah State secondary that has labored in stopping much of anything this season. But again, it’s not the matchups and the Xs and Os that are most troubling—it’s the lack of fire. And when betting on college football, it’s just hard to get behind a team showing so little of it. The resistance on this side of the ball for Utah State is at times startlingly-low. On the road against a team that can be punishing on opposing defenses, one wonders what can change before Thursday.

The “Bridger’s Battle,” which is the oldest rivalry for both schools might not be much of a battle at all. And sure, it almost looks too easy—deferring to the more-intact and rested home team against an opponent that is currently being checked for a pulse. Let’s face it, betting on this particular Cowboys’ team laying points doesn’t provide the most-comfortable feeling. But between their run-defense, which is pretty good and the different playmakers on offense, I see Wyoming following suit of some recent Utah State opponents, getting the win and cover at home on Thursday.

Loot’s Pick to Cover the Point Spread: I’m betting on the Wyoming Cowboys minus 19.5 points. Tired of our credit card not working at online sportsbooks? It’ll work at Bovada! They even can get Capital One cards to work! More reasons to bet there: 50% real cash bonus, the BEST live betting platform on the web, rebates on ALL your betting action win, lose or draw and FAST no-hassle payouts! Click here to start enjoying a better betting experience!