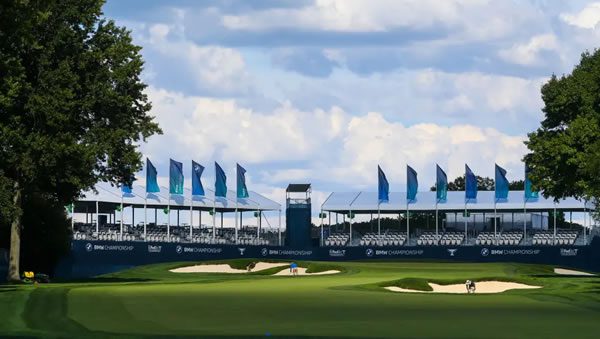 Following a crazy finish to the opener of this FedEx Cup playoff last week, the PGA Tour visits a venue it’s never visited before for the playoff’s second event, the BMW Championship at the Wilmington Country Club in Delaware.

A field of 69, cut from the 122 who started last week’s playoff opener, will play this weekend for some big money and those big FedEx Cup points.

Last week’s tough-luck Will Zalatoris shot 71-63-65-66 to reach a playoff with Sepp Straka, then made a bogey-4 to beat Straka’s double-bogey five on the third extra hole to win the St. Jude Championship in Memphis. Lucas Glover and Brian Harman finished tied for third at three shots back, while Adam Scott, Jon Rahm, Collin Morikowa, Tony Finau, Matt Fitzpatrick, Andrew Putnam, and Trey Mullinax all tied for fifth.

The South Course at Wilmington CC, built in the 1950s, and renovated as recently as 2020, will play as a par-71 at more than 7,500 yards. This course features fairway bunkers on a dozen holes, thick roughs, long fescue, and large multi-tier greens.

The Wilmington Country Club has never before hosted a PGA event. But it did host the 2013 Palmer Cup, when Justin Thomas, Daniel Berger, and Patrick Rodgers led a team of American college players to victory over a team of Europeans.

Last year Patrick Cantlay shot 66-63-66-66 - 27-under par - then outlasted Bryson DeChambeau in a six-hole playoff to win the BMW Championship. But that tournament was played at Caves Valley in Baltimore.

Each week we take a look at the online betting sites and highlight what we believe to be some of the best values on the board, plus some picks to click on the weekend. Odds to win and pairings for this week can be found at Bovada. Here’s our take on some of the field in this week’s BMW Championship.

Rory McIlroy tops Bovada’s BMW Championship betting board at +1100, followed by Rahm at +1200 and Justin Thomas, Scottie Scheffler, and Zalatoris at +1400.

Zalatoris finally broke through and won last week, after so many previous close calls. And we won’t be surprised when WZ rides Big Mo to another top finish this week. Zalatoris owns eight top-10 finishes this season, including losses in playoffs at Torrey Pines and the PGA Championship at Southern Hills, and a T-2 at the US Open. He also had a T-5 at the Memorial and a T-6 at the Masters. It’s funny how things happen in sports when a player or team or a horse experiences a string of near-misses, then gets that first win, which opens the dam to more victories from there. At 14/1, that’s enough value for us with Zalatoris this week.

We also like betting guys on the bounce-back, and that’s the category Horschel falls into this week. This Florida Gator owns four top-six finishes over his last 15 events, including a win at the Memorial, a second at New Orleans, and a T-2 at Bay Hill. He then shot 68 in the first round last week but a second-round 71, which wasn’t enough to make the cut. Horschel can go somewhat Jekyll-and-Hyde, and we like his chances, especially at 66/1, of playing like a Jekyll this week.

We’ve been fans of Varner since his days of playing overseas. This East Carolina Pirate owns three top-six finishes this season, including a T-6 at the Players Championship and a T-3 at Harbour Town. More recently, he’s missed the cut in three of his last five tournaments, but he’s better than that. At 125/1, we certainly believe Varner’s worth a flyer bet.

Play begins at 9:10 am local time Thursday with the opening twosome of Varner and Alex Noren.

The top 30 players in the FedEx point standing after this weekend advance to the final event of the season, the Tour Championship next week at East Lake in Atlanta.