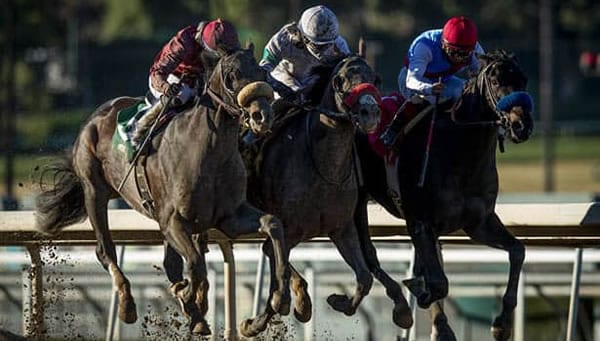 The Wood Memorial Stakes is the most interesting Kentucky Derby prep of the weekend, at least from a handicapping perspective, and almost every horse has a shot to win.

The logical choice based on expected trips, rider, and trainer, is Risk Taking, who has won two in a row for top trainer Chad Brown going the Wood Memorial distance of 1 1/8-miles, including the Withers-G3 at Aqueduct in his most recent. He also gets a rider switch to star jockey Irad Ortiz for this race. Still, he’s just not the kind of horse that gets you excited.

Weyburn, who won the Gotham Stakes-G3 going a mile in game fashion in his first start off the layoff, is a lot more interesting. Trained by future Hall of Famer Jimmy Jerkens, one of the top horsemen in the world, Weyburn was 46-1 in the Gotham, and he’ll be a much shorter price here, but Jerkens is a pro at stretching horses out, and if this horse can settle from just off the pace, he should be able to make a good bid in the drive. He also has enough pedigree to get the distance.
Crowded Trade missed by a nose to Weyburn in the Gotham, but he had a fitness advantage in that race. You can’t really fault his form, but he’ll need to take another step forward here.

Prevalence looks like he has some quality to him and may try to steal this race. He’s 2-for-2 and should be the speed, but he might get company upfront from recent N1X Parx allowance route winner Market Maven and maybe even Weyburn.
Remsen-G2 winner Brooklyn Strong makes his first start off the layoff, and this race will set up for him, but we’re guessing he’ll need a race, and we’re also not sure of his quality.

The real sleeper in here is Candy Man Rocket, and he could go either way for Hall of Fame trainer Bill Mott. Two starts ago, he looked good winning the Sam F. Davis-G3 at Tampa Bay, but he followed that race up with an 11th-place finish in the Tampa Bay Derby-G2 after being in contention too late on the final turn. There may be more to it than that, though. He was between horses in late turn, and when a horse went whooshing by him, he stopped and went straight backward, but not like most horses do so. It almost looked like the surprise move by his outside rival spooked him. Rumors are he held his breath after that.
Sounds odd, but at 12-1 on the morning line and with a top trainer at the helm, if this horse gets a clean trip on the outside without any surprises, he could revert to his previous form, which gives him a shot.

Deposit $200 and get $100 free at an Online Sportsbook where your credit card will work for deposits! Plus get rebates on every bet!

Medina Spirit and Dream Shake look like the two to beat in the Santa Anita Derby-G1 after running second and third, respectively, behind the undefeated Life Is Good in the San Felipe-G2. The latter freaked in that race to win by eight lengths while drifting out and is now predictably off the Kentucky Derby trail.
R B Lewis-G3 winner Medina Spirit was game in wearing down the much less seasoned Dream Shake for the place in the San Felipe, and Dream Shake could turn the tables on that one at a bit of a price in the Santa Anita Derby if he improves in this third lifetime start.

While Life is Good is off the Derby trail, trainer Bob Baffert still has a shot to win his 10th Santa Anita Derby with Medina Spirit and maybe even stablemate Defunded. The latter was impressive, breaking his maiden sprinting off a sixth-month layoff and could follow the typical Baffert trainer pattern of running out of their skin for three or four races and then flattening out on the form curve. He’s likely not seasoned enough to handle these yet, but the price will be right.
The Great One was in contention outside to midway through the final turn in the San Felipe and then faded to finishing 16 ¾-lengths behind the winner. That was his first stakes try, but still, it’s hard to see him moving forward off that race.
The sleeper in this race may be Rock Your World. He’s never run on the dirt, but he’s won both his lifetime starts on the turf, and he looks like he has some substance to him. If his form and attitude transfers to the dirt for trainer John Sadler, he could possibly post an upset with a dream trip.

Ottothelegend also deserves mild longshot consideration after being ridden into a switch into the turn and having some solvable traffic problems in the stretch while breaking his maiden routing at Oaklawn Park. Trained by Steve Asmussen, he’s a half-brother to multiple graded stakes Twirling Candy, but he’d still have to improve quite a bit on numbers as he makes a steep class rise here.

Current Kentucky Derby favorite Essential Quality kept his undefeated streak alive when he won the Southwest Stakes-G3 off a 14-week layoff, and he probably doesn’t even need his best race to win the Blue Grass. He’ll be the short-priced deserving favorite in this race, and It’s a case of can’t bet on him and can’t bet against him.

Highly Motivated is the only horse in the Blue Grass that is even close to Elusive Quality on numbers, and even though he was steadied a bit early in his first start off the layoff in the Gotham Stakes-G3 before finishing third, he just didn’t look impressive.

Hidden Stash ran a good race to finish second in the Tampa Bay Derby-G2 in his second start off the layoff, and he should make a run here, but he was turned back late in the Tampa Bay race, and that likely won’t bode well for him against a horse like Elusive Quality.

Rombauer looked decent, beating a lesser bunch off the layoff in the El Camino Real Derby at Golden Gate, going the Blue Grass distance of 1 1/8-miles. He’s an honest horse who would not be a surprise in-the-money finisher.
Hush of a Storm is also worth including in your Blue Grass superfectas off his recent victory in the John Battaglia Memorial at Turfway Park. Listed at 15-1 on the morning line, his trainer William Morey is somewhat underrated, and this horse has worked exceptionally well at Keeneland.

Keep Me in Mind flattened out in his first start off the layoff in the Rebel Stakes-G2 at Oaklawn Park and should improve off that race. His third-place finish in the Breeders’ Cup Juvenile last year gives him a shot to rally for a piece here without threatening Essential Quality.

We’d rather take a shot in the exotics with a horse like Untreated, who showed a good turn of foot breaking his maiden routing for trainer Todd Pletcher at Tampa Bay in his last. He was easily the best in that race while also getting some education and should move forward as he steps way up in competition.