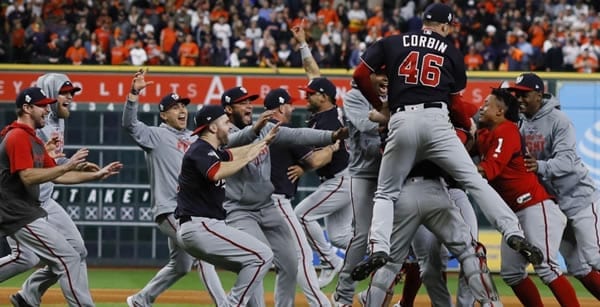 With cold temperatures still the norm in much of the country, baseball might be the last thing on the minds of a lot of sports fans. But pitchers and catchers report on Feb. 10 for the Mets and Pirates and a day to four days later for every other team, so it’s time to start thinking of who might be a good play for a futures bet for the World Series.

Obviously, some bets are such a longshot that there’s no point even to play them. It might be fun to throw $5 on the Detroit Tigers to win the World Series at +25000, but the only way the Tigers are winning the title is on Out of the Park Baseball 21, and even then, their chances don’t look promising. I know longshots have paid out before, such as Leicester City winning the Premier League at +500000, but the Foxes winning in England was a totally different story from anything in the U.S. Here in the States, the Tigers are playing for two or three seasons from now, knowing their win-loss record this year and next doesn’t mean that much as long as their young players get some experience. Leicester City couldn’t do that, because relegation exists in England and could have sent the Foxes tumbling out of the Premier League if they’d finished bottom three. They had no choice but to play for a title, something the Tigers and Marlins of the world don’t have to worry about in 2020.

So these bets are at least somewhat realistic options, along with one wager that will attract attention but really shouldn’t if you’re trying to win money. Here are the bets you should consider this season for the World Series.

Add a pitcher like Gerrit Cole to an already strong team, and you instantly become a World Series fa-vorite. Of course, the Yankees aren’t going to fetch much of a price in this spot because everyone and their brother believes that New York is going to be the team to beat in the American League, especial-ly after Houston went up in flames via the stealing signals scandal. But New York has plenty of fire-power that could have taken down an Astros squad that wasn’t overwhelmed by distractions, and the Yankees bring a good chunk of it back.

D.J. LeMahieu really should have been the AL MVP last season (honestly, how was Mike Trout even in the conversation when the Angels went 72-90 and finished 35 games out of first place?), and Gleyber Torres might very well be the AL MVP this year. Giancarlo Stanton has the potential to sock 40 homers if he can stay healthy, and the addition of Cole means the Yankees shouldn’t have to resort to the opener strategy that worked well for the Rays but proved a disaster in the Bronx when the Yankees tried it. New York is not Tampa Bay and shouldn’t try to be Tampa Bay. The Rays win by outthinking everyone; the Yankees win by outspending everyone. Until baseball puts in a salary cap to address this, that’s going to be the strategy that wins in New York.

Where can this go wrong? If Cole can’t adjust to pitching in the Bronx, this could all blow up in a hur-ry. First, there’s pitching in Yankee Stadium itself. The park is not exactly the most pitcher-friendly park in the American League. Having success as a visitor is one thing, as you only have to deal with the place once in a long span. Doing it in pinstripes is harder, and it’s only made harder by the New York media. More than one player (hello, Randy Johnson and Carl Pavano) has proven completely un-able to adjust to pitching in New York and dealing with the media, and what’s happened is that they’ve turned into total busts as free agents. To succeed with the Yankees, you have to embrace the spotlight that comes with playing in New York. Can Cole do that, after spending his career in Pittsburgh and Houston, two markets where the baseball team gets overshadowed by football?

The other area of concern is the middle infield. With Didi Gregorius in Philadelphia, can the Yankees get more consistent play from Torres at shortstop? If he can’t get the job done on defense and has to move back to second, the Yankees will have to get creative to keep both Torres and LeMahieu in the lineup while preventing defensive disasters.

Spoiler alert: the Braves are one of just two National League teams on this list. That’s in part because the Dodgers are the only other favorite in the NL that I feel good about at all, and they’re just not that enticing after getting beat in back-to-back World Series appearances in 2017 and 2018. Teams usually don’t stick around to keep taking bites at the apple after that. But the Braves are a team on the rise and should be hungry after winning the division and then having to watch the Nationals take the sce-nic route to their first World Series title.

There’s concern that the Braves need another bat after watching Josh Donaldson leave for Minnesota, but I don’t know if there’s that much to be concerned about in that area. After all, Ronald Acuna Jr, Freddie Freeman, and Nick Markakis still know how to hit. Atlanta’s got a solid rotation with some quality starters and a good young bullpen. This team is set up to win for the long haul and doesn’t have to chase a title this year. Donaldson is already 34, and I can see why the Braves didn’t want to take the risk of giving him a four-year deal. The odds are pretty good that the window will stay open for the Braves for a few years, but the opportunity is there right now. If the Central devolves into the mess, it seems it might. The Braves will be left fighting with the Dodgers for National League superi-ority. I’d rather have the upside of the Braves at +1000 than the Dodgers at +600.

BASEBALL BETTORS CAN SAVE THOUSANDS OF DOLLARS PER SEASON BY TAKING ADVANTAGE OF NICKEL & DIME BASEBALL LINES!

First, Tampa Bay’s rotation doesn’t take a back seat to anyone, even the Yankees. With Blake Snell, Charlie Morton and Tyler Glasnow on the slab, the Rays boast one of the strongest sets of arms in the American League, and that’s before you throw in that Tampa Bay has perfected the opener strategy and will have no problem whatsoever going to a bullpen arm in between those starts. The Rays are one of the smartest teams in the game and consistently think two or three steps ahead of everyone else, and that sets them up for major success in a division that appears top-heavy. Boston is still reel-ing from its own scandal issues, and Toronto and Baltimore look like they might combine for 125 wins for the season (which would be an improvement; last year, the Jays and Orioles only got 121).

Of course, that leaves the Yankees, but Tampa Bay doesn’t have to beat the Yankees in the regular season. Most likely, the American League is going to come down to a five-game series between the Rays and Yankees no matter who wins the AL East, and I like Tampa Bay’s overall rotation against the Yankees in that matchup. I certainly like it well enough to take it at 20-1 odds, as throwing $5 on the Rays and getting $100 back if it works is a gamble I’m very willing to try.

You could make a case for the White Sox here, given that Chicago seems ready to win the AL Central and gets the benefit of beating up on Kansas City and Detroit 38 times this year. But at +2800, I think too many people have already caught on to the Pale Hose. On the other side of the coin, Texas is get-ting great odds at +5000 after trading for Corey Kluber from Cleveland and watching the Astros get engulfed by scandals, but a new ballpark is a big question mark, and I think the Rangers have too many holes to be the ones to take advantage (and that’s assuming the Astros do fall off, which might or might not occur).

So that leaves Cincinnati, a good, young team that I really like to exceed their projected win total of 85.5 this season after they’ve made some solid moves to improve a 75-87 club. The Reds have a sense that the NL Central is wide open this season with the Cardinals standing pat and waiting for rein-forcements from Triple-A Memphis and the Cubs not sure what they want to be. So Cincinnati opened the wallet and brought in Nicholas Castellanos, Mike Moustakas, Shogo Akiyama, and Wade Miley, instantly strengthening themselves in the outfield, infield, and their rotation. Cincinnati already fea-tures a rotation that could be the Central’s best with Luis Castillo, Sonny Gray, and Trevor Bauer, and if Miley can boost that, the Reds will be in great shape.

Returning to the Leicester City bit I mentioned at the start of this piece (see, I was going somewhere with that), the Reds have to strike now while the iron is hot. That’s because Castellanos, who led the league in doubles last year with 58 for the Cubs, can opt-out of the four-year deal the Reds gave him after this season. That means Cincinnati has every incentive to show him that signing in southwestern Ohio was a great move, and the best way to do that is by winning the NL Central and getting a shot in the playoffs. Taking a team that needs a big year at +3300 is exactly what you want in your longshot candidate.

BET YOUR 2020 MLB FUTURES PICKS FOR FREE BY DEPOSITING $100 TO $300 AT MYBOOKIE THROUGH THIS SPECIAL LINK AND YOU’LL RECEIVE A DOLLAR FOR DOLLAR MATCHING 100% REAL CASH BONUS! FREE LOOT! MUST USE BONUS CODE: PREDICT100

My family is full of Indians fans. I would love to see the Tribe put an end to their 72-year drought. But this team is not put together to win the World Series and actually might be on its way in the other di-rection. Given that they’re getting the same odds as Tampa Bay, Cleveland is the definition of pyrite, or fool’s gold.

The trade of Corey Kluber to Texas might make the Rangers an intriguing longshot play, but in Cleve-land, it seems a white flag. The Indians seem to have their sights on getting the rebuilding process going now and playing for 2022. It seems that Cleveland has decided that the window has already slammed shut, and the Tribe might not be done selling assets. Francisco Lindor might be on the way out of Cleveland by the time you read this piece (OK, maybe not, but don’t be surprised to see him traded by the end of spring training), and if he goes, it’s tough to see how the Tribe competes with not only the Twins but also the White Sox. Cleveland will still be a solid ball club given the presence of Mike Clevinger and Shane Bieber, but there doesn’t seem to be enough here to push for the World Series.

Really, this seems to be a case of wanting to avoid the example set by the 1992 Pirates, who decided to reduce the payroll before the season started by trading John Smiley to Minnesota, but made no other moves, thinking that they could still contend for the World Series. But the Pirates’ lack of depth caught up with them at the end, and they fell to Atlanta in the NLCS and didn’t return to the playoffs for 20 years. The Indians won’t fall off that badly, as they’re still a smart, well-run organization that should be back in contention in a few short years. But this seems to be their last stand for the current era, and that isn’t enticing.