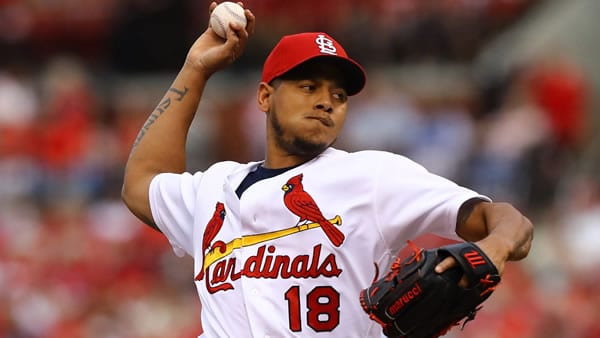 That’s not an ideal situation for the Cubs, who have been relatively poor away from Wrigley Field. Of Chica-go’s 22 wins, 16 of them have come on the North Side of the Windy City. The Cubs are just 6-12 away from home and have lost five of their past eight road contests, despite six of those eight games coming against the Tigers and the Reds. On the other side of the ledger, the Cardinals have an excellent home record, having won their past five contests at Busch Stadium and 14 of 22 overall.

Early in the season, the Cubs were known for their lack of hitting, as Chicago ranked dead last in the majors after the first few weeks of the season. But things have changed in recent weeks, in part because the weather has become more conducive to success at the plate, and the Cubs have performed much better at a team at the plate. In their past seven games, Chicago has scored four runs or more on six occasions, and although they were facing lesser competition in the Nationals and Tigers, that kind of success against anyone is a sign of a team that’s getting the job done at the plate.

The one issue here is that both teams have the same problem: they’re pretty solid at hitting home runs, but if the homer doesn’t come, they find it difficult to get runs home. Neither team ranks in the top 10 in total bases, which says that these teams aren’t getting many extra-base hits unless they’re leaving the yard entirely. Both teams can slug it pretty well, but if the ball stays in the park, this might end up a solid under bet.

The Pitcher and the Pendulum

If Kyle Hendricks could put two consecutive games together, he’d be off to a great start to 2021. Unfortunately for the Cubs, Hendricks has been swinging back and forth between dominant and disastrous as of late, as his past seven starts have had somewhat mixed results. Hendricks did allow eight hits in his most recent start, but he scattered them well enough to give up just one run and allowed his team to cruise to victory. Over his past seven starts, his four good outings have seen him average one earned run per game.

But when the pendulum swings to the other side, things have gone downhill in a hurry for both Hendricks and the Cubs. Not only did Chicago lose all three, but only one of those starts saw Hendricks make it out of the fourth inning, as the other two saw him give up seven earned runs before the Cubs finally went to the pen. With that kind of inconsistency, savvy bettors have waited to see Hendricks in action before they decide whether to bet or fade him for the evening.

It’ll be a nice night for baseball in Missouri, with temperatures around 82 degrees at the first pitch and the wind blowing 10 miles per hour toward third base.

The main thing that gives me pause here is Hendricks, who has seemed incapable of following up a good start with another good one. The Cubs haven’t gotten any consistency this year, which is why they’re sitting just above the .500 mark with a team that looks neither good enough to win a playoff spot nor bad enough to challenge for a high draft pick.

The Cardinals have been strong at home all season long, and I think they get the better of this pitching matchup. Give me St. Louis.