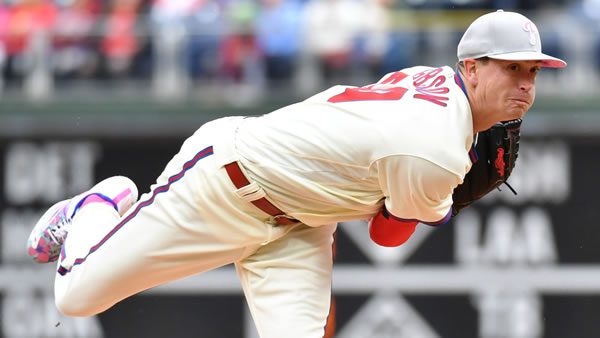 The Philadelphia Phillies host the Chicago Cubs on Friday, July 22nd at Citizens Bank Park. The first pitch in this matchup is scheduled for 07:05 ET. The MLB Odds Board places Philadelphia as the favorite (OFF), with an OU line set at OFF.

In the Chicago Cubs’ last game, they picked up a 3-2 win over the Mets. Overall, the team’s pitching staff limited the Mets to 2 runs on 9 hits. On offense, Chicago’s lineup put together a total of 7 hits, leading to 3 runs. This victory came despite being the betting underdog, getting 120.0 on the moneyline. Combined, the Cubs and Mets fell short of the over-under betting line of 8.0 runs. So far, Chicago has been a good candidate to fall below the betting line, as their over-under record sits at just 42-44-6.

In their last 5 games, the Cubs are below .500, at 1-4. This mark has come on an average run margin of just -15. A key reason for Chicago’s recent struggles is an offense averaging just 1.6 runs per game over their last 5 contests, compared to a season average of 4.20. Chicago’s overall series record is just 9-15-5.

The Philadelphia Phillies are coming off a big win over the Marlins by a score of 4-0. In the winning effort, the team’s pitchers held the Marlins to 0 runs and 4 hits. At the plate, the Phillies only came through for 4 runs on 8 hits. Philadelphia picked up the win while being favored at -135.0. For the season, the team has been favored in 60 games, winning at a rate of 56.9%. With this result, the Phillies and Marlins combined to fall below the over-under line of 7.0 runs. Philadelphia still has an above .500 over-under record at (47-43-2).

In their last 5 games, the Phillies have put together a record of 3-2. During this time, the team’s run differential sits at +8. Philadelphia is still playing winning baseball, even with their offense averaging just 4.2 runs per game, compared to a season-long mark of 4.68. Philadelphia has a below .500 series record of just 13-14-2.

The Chicago Cubs will send Justin Steele to the mound with an overall record of 3-6. To date, Steele has an ERA of 4.15 while lasting an average of 4.83 innings per appearance. Teams have been able to rack up runs against him, as he has a batting average allowed of 0.248. This season, Steele has been able to avoid giving up home runs, allowing just 0.55 per 9 innings. On the season, Justin Steele has had no problem racking up strikeouts, posting a strikeout percentage of 22.0%. This includes a per game average of 4.65 K’s per game. Command has been a problem for Steele, as he is giving up 4.04 walks per outing.

In today’s game, Philadelphia turns to starter Kyle Gibson. For the year, he has a record of 5-3. Gibson gets the start with an ERA of 4.35. On average, he has lasted 5.39 innings per appearance. Opposing teams have hit the ball well against the right-hander, with a batting average of 0.247. Opposing hitters are hitting home runs at an above-average rate against Gibson. This year, he is allowing 1.2 HR’s per 9 innings pitched. In terms of strikeouts, Kyle Gibson has a strong K% of 20.0%, including a per game average of 4.44. For the season, he has struggled with command averaging 2.4 walks per outing.

Today’s game between the Chicago Cubs and Philadelphia Phillies is their first matchup of the year. Dating back to last season, Philadelphia picked up 5 wins compared to 2, taking the season series. In these 7 meetings, the two teams combined for an over-under record of 6-1, with the average scoring differential sitting at 5.86 runs. Last year, the two teams combined to average 15.0 runs per game.

Heading into Friday night’s National League matchup between Chicago and Philadelphia, the Phillies have the edge on the moneyline. Even though Justin Steele has pitched well over his last 2 outings, he has been the victim of minimal run support. Look for this trend to continue, as Kyle Gibson has given up just 1 run over his last 13 innings. I like Philadelphia on the moneyline.

Free MLB Pick: Phillies Moneyline. Bet your Cubs vs. Phillies pick and ALL your MLB bets for FREE this week by taking advantage of a 100% real cash bonus on your first deposit of $45 to $300 when you use bonus promo code PREDICT100 at MyBookie Sportsbook!