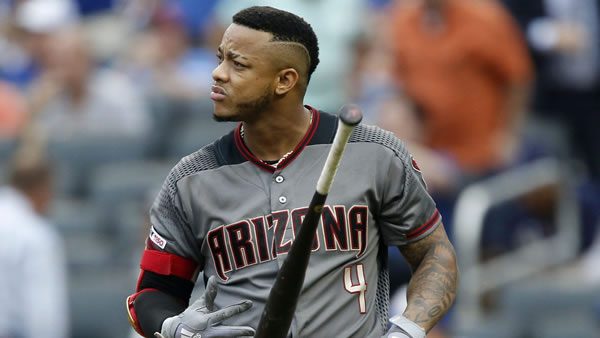 The Cincinnati Reds host the Arizona Diamondbacks on Thursday June 9th at Great American Ball Park. The first pitch in this matchup is scheduled for 12:35 ET. The MLB Odds Board places Cincinnati as the favorite (-135), with an OU line set at 9.5.

The Arizona Diamondbacks will look to pick up another big win after they defeated the Reds by a score of 7-0. On their way to the victory, the pitching staff gave up 0 runs on 5 hits. The Diamondbacks benefited from an offense that generated 7 runs on 11 hits. This victory came despite being the betting underdog, getting 100.0 on the moneyline. Together, the Diamondbacks and Reds stayed below the over-under line set at 9.5 runs. This outcome pushed Arizona’s over-under record further below .500 at 24-33-1.

After their 5 most recent games, the Diamondbacks have gone just 1-4. In this rough stretch of games, the team’s run differential comes in at -10. Arizona’s offense is in the middle of a cold streak, as their offensive production has dipped to just 3.2 runs per game over their last 5 contests. Arizona’s overall series record is just 7-8-3.

Cincinnati will be looking to move on from a tough loss to the Diamondbacks by the score of 7-0. On their way to giving up 7 runs, the Reds staff allowed 11 hits. With their 5 hits, the Reds could only plate 0 runners. Leading into the game, Cincinnati was the betting favorite at -110.0. For the season, the team has been favored in 17 games, winning at a rate of 41.0%. Combined, the Reds and Diamondbacks’ run total fell below the over-under line of 9.5 runs. Cincinnati still has an above .500 over-under record at (30-25-1).

In their last 5 contests, the Reds have just 2 wins, going 2-3. Despite this record, the team still has a positive run differential of +3 (last 5). Despite their struggles in the win column, the offense has averaged 6.6 runs over their last 5 games. This is an improvement over their season-long mark of 4.43. Cincinnati has a below .500 series record of just 5-9-4.

Arizona will roll with Zach Davies (2-3) as their starter. So far, Davies has put together an ERA of 4.18. In his appearances leading up to today, he has lasted an average of 5.09 innings. So far, Davies has a batting average allowed of 0.234. Opposing batters have been able to drive the ball with power against Davies, averaging 1.29 homers per 9 innings pitched. Up to this point, Davies has a strikeout percentage of just 18.0% and a per game average of 3.91. For the season, he has struggled with command averaging 3.38 walks per outing.

Cincinnati will roll with Tyler Mahle (2-5) as their starter. So far, Mahle has put together an ERA of 4.98. In his appearances leading up to today, he has lasted an average of 4.93 innings. Mahle comes into the game with a batting average allowed of 0.236. Opposing batters are hitting for power at a below-average rate against Mahle, as he is allowing just 0.91 per 9 innings. On the season, Tyler Mahle has had no problem racking up strikeouts, posting a strikeout percentage of 24.0% while averaging 5.33 K’s per game. Command has been a problem for Mahle, as he is giving up 4.22 walks per outing.

For the season, the Arizona Diamondbacks and Cincinnati Reds will be playing their 4th game of the season. Cincinnati holds the edge in the series at 2-1. The over-under record in this series sits at 1-2. The average run total in these games is 12.67 runs per game. The averge scoring margin in these meetings is 6.67 runs. Last season, Arizona picked up the series win, 5 games to 1. The over-under record in last year’s matchups was 5-1, with the average run total being 12.67 runs per game. On average, the winning team won by a margin of 3.33 runs per contest.

Heading into Thursday afternoon’s matchup between Arizona and Cincinnati, the Reds are the slight favorite on the moneyline. However, Cincinnati has lost 3 straight games in which Tyler Mahle was the starter. I recommend taking the Diamondbacks to pick up the road win, as Zach Davis is coming off an outstanding start vs Pittsburgh. I like Arizona on the moneyline.

Free MLB Pick: Arizona Diamondbacks Moneyline. Question: Where do you bet your baseball picks? Does your bookie offer a 50% real cash bonus up to $250 in free bets? Does your credit card work there for depositing? Do you receive a rebate every single time you bet, even if your bet wins? Does your bookie have the BEST live betting platform on the web? Do they pay fast? It’s highly unlikely that your sportsbook offers even half of these great benefits. So take a few minutes to check out our Bovada Review and then look at their site for a few minutes. You’ll be so glad you made the switch!