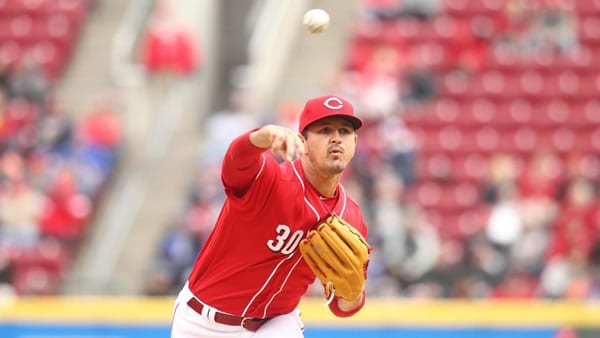 The Cincinnati Reds host the San Francisco Giants on Sunday, May 29th at Great American Ball Park. The first pitch in this matchup is scheduled for 11:35 ET. The MLB Odds Board places San Francisco as the favorite (-143), with an OU line set at 9.0.

After suffering a 1-run loss to the Cincinnati (3-2), the Giants will look to get back in the win column. Despite the loss, San Francisco’s pitching staff gave up only 3 runs on 5 hits. With their 12 hits, the Giants could only muster 2 runs. Giants suffered the loss, despite being favored at -180.0. So far, the team has been the favorite in 39 of their games, winning at a rate of 59.0%. Combined, the Giants and Cincinnati fell short of the over-under betting line of 10.0 runs. San Francisco games have still surpassed the over-under line more than half of the time at (25-19-1).

The Giants will be hoping to pick up a win in today’s matchup, as they have gone just 2-3 over their last 5 games. In this rough stretch of games, the team’s run differential comes in at -8. However, the team’s offense isn’t to blame, as they are averaging 5.6 runs per game compared to their season average of 5.02. So far, San Francisco has won over half of their 16 series played, going 8-6-2.

The Reds will look to add another win, as in their last game, they defeated the Giants by a score of 3-2. In the winning effort, the team’s pitchers held the Giants to 2 runs and 12 hits. With their 5 hits, the Reds could only muster 3 runs. Despite being the underdogs, getting 160.0 on the moneyline, the Reds still picked up the win. In their 36 games as the underdog, their straight-up win percentage sits at 33.0%. With this result, the Reds and the Giants combined to fall below the over-under line of 10.0 runs. Even still, Cincinnati games have still gone over the betting total over half of the time, at (26-19-1).

In their last 5 games, the Reds have put together a record of 4-to 1. Their recent success is backed by an average scoring margin of 14 (last 5). Compared to their season average, the Reds come into this game swinging the bats well, averaging 7.2 runs per game. Cincinnati has a below .500 series record of just 4-8-3.

Alex Cobb gets the start for the Giants, with an overall record of 3-3. To date, Cobb has an ERA of 3.38 while lasting an average of 5.64 innings per appearance. Opposing teams have hit the ball well against the right-hander, with a batting average of 0.246. So far, Cobb has managed to keep the ball in the ballpark, allowing just 0.4 home runs per 9 innings. On the season, Alex Cobb has had no problem racking up strikeouts, posting a strikeout percentage of 28.0%, while averaging 6.375 K’s per game. Throughout the season, Cobb has avoided walking batters, allowing just 1.99 per contest.

Tyler Mahle gets the start for the Reds, with an overall record of 2-5. So far, Mahle has put together an ERA of 5.74. In his appearances leading up to today, he has lasted an average of 4.7 innings. Opposing teams have hit the ball well against the right-hander, with a batting average of 0.249. So far, Mahle has managed to keep the ball in the ballpark, allowing just 0.96 home runs per 9 innings. Per game, Tyler Mahle is averaging 5.0, on a strikeout percentage of 24.0%. For the season, he has struggled with command averaging 4.4 walks per outing.

For the season, San Francisco Giants and Cincinnati Reds will be playing their 2nd game of the season. Cincinnati holds the edge in the series at 2-0. Through 2nd games, the series’ over-under record is 0-2, with the average run total sitting at 8.71 runs per game. In these matchups, the average scoring differential sits at 2.5 runs. Last season, San Francisco picked up the series win, 6 games to 1. In these 7 meetings, the two teams combined for an over-under record of 3-4. Last year, the Giants and Reds averaged 8.71 runs per game. On average, the winning team won by a margin of 4.43 runs per contest.

Heading into Sunday’s National League matchup between San Francisco and Cincinnati, both Alex Cobb and Tyler Mahle will look to rebound from getting roughed up in their last outings. Even though the Giants have yet to put together a strong offensive performance in this series, look for San Francisco’s bats to come alive. I recommend taking the over in this matchup.

Free MLB Pick: Over 9 Runs. Bet your Giants vs. Reds pick and ALL your baseball wagers for FREE this week by taking advantage of a 100% REAL CASH bonus on your first deposit up to $500 when you sign up through our special link and use bonus code PREDICTEM at Betnow Sportsbook!