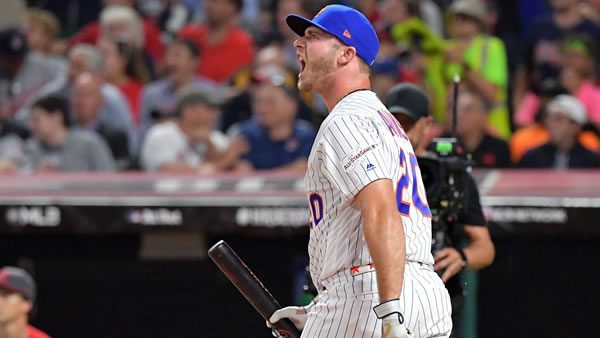 Money Line: Rangers OFF / Mets OFF (BetNow - Use special bonus code PREDICTEM and they’ll give you a 100% real cash bonus up to $500!)

The New York Mets host the Texas Rangers on Saturday, July 2nd at Citi Field. The first pitch in this matchup is scheduled for 04:10 ET. The MLB Odds Board places New York as the favorite (OFF), with an OU line set at OFF.

After suffering a 1 run loss to the Mets (4-3), the Rangers will look to get back in the win column. In the loss, Texas’s pitchers gave up 4 runs on 6 hits. With their 6 hits, the Rangers could only muster 3 runs. Texas’s loss came as the underdog, getting 155.0 on the moneyline. Together, the Rangers and Mets stayed below the over-under line set at 9.0 runs. So far, Texas has been a good candidate to fall below the betting line, as their over-under record sits at just 32-37-6.

Over the Rangers’ last 5 contests, they have a record of just 2-3. Despite their below .500 record (last 5), in this stretch, the team still has a positive run differential at +7. However, the team’s offense isn’t to blame, as they are averaging 5.2 runs per game (last 5) compared to their season average of 4.37. Texas’s overall series record is just 9-13-3.

The Mets are coming off a tight 4-3 win over the Rangers. In the win, the pitching staff allowed just 3 runs on 6 hits. The Mets offense ended the game with just 4 runs on 6 hits. In the game, New York was able to take care of business as they were the favorite at -185.0. So far, the team has won 70.0% of the games in which they were favored. Combined, the Mets and Rangers’ run total fell below the over-under line of 9.0 runs. Even still, New York games have still gone over the betting total over half of the time, at 39-32-6.

In their last 5 contests, the Mets have just 2 wins, going 2-3. During this time, the team has a run differential of -8. If New York is going to pick up their play, they need to improve their offensive performance. Over their last 5 contests, they are averaging just 2.4 runs per game, compared to a season average of 4.81. On the season, New York has won more than half of their series, going 18-5-2.

Martín Pérez gets the start for the Rangers, with an overall record of 6-2. Currently, Pérez has an ERA of just 2.22 while pitching an average of 6.21 innings per outing. Across his previous appearances, the left-hander has a batting average allowed of 0.239. So far, Pérez has managed to keep the ball in the ballpark, allowing just 0.19 home runs per 9 innings. Per game, Martín Pérez is averaging 5.13, on a strikeout percentage of 20.0%. For the season, he has struggled with command averaging 2.22 walks per outing.

Trevor Williams gets the start for the Mets, with an overall record of 1-4. To date, Williams has an ERA of 3.64 while lasting an average of 3.0 innings per appearance. Teams have been able to rack up runs against him, as he has a batting average allowed of 0.25. Opposing hitters are hitting home runs at an above-average rate against Williams. This year, he is allowing 1.29 HRs per 9 innings pitched. Up to this point, Williams has a strikeout percentage of just 22.0% and a per game average of 2.79. Leading into the game, he has shown a strong command of his pitches, averaging just 2.79 walks per contest.

Today’s matchup between the Texas Rangers and New York Mets will be their 2nd meeting of the season. Currently, New York is winning the season series 1-0.

Heading into Saturday’s interleague matchup between New York and Texas, the Mets will look to turn around their fortunes with Trevor Williams on the mound, as they have lost 4 straight games in which he started. On the other side, Martin Perez now has a WHIP of just 1.16 and Texas has picked up 4 straight wins in his starts. I like the Rangers on the moneyline.

Free MLB Pick: Texas Moneyline. Bet your Rangers vs. Mets pick and ALL your baseball wagers for FREE this week by taking advantage of a 100% real cash bonus on your first deposit of $100 to $300 when you use bonus code PREDICT100 at MyBookie Sportsbook!