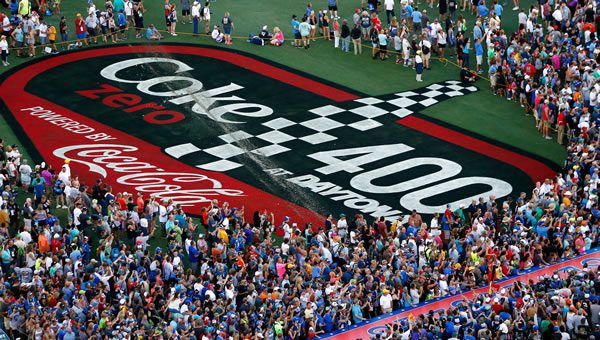 Kyle Larson was the lucky winner at Watkins Glen this weekend, where the drivers saw a touch of rain and a little bump at the end that cost Chase Elliott the win. That bump was something that the announcers were looking for some drama in, but much to their chagrin, Elliott remained quiet for the remainder of the race. Those three laps saw Larson drive away from Elliott, who fell back to 4th place in the end. The only thing that Elliott said over his radio was, “should’ve known better.” I think that many are trying to find contention where there isn’t any. Both Elliott and Larson are fierce competitors and drivers that are willing to do whatever it takes to ensure that they get to the checkered flag first. Unfortunately for Elliott, he was sitting in the catbird seat with Larson behind him and couldn’t get away fast enough. Larson drove him up the track and managed to get him moved, which is truly what racing is all about in the grand scheme of things. Ultimately, Chase can’t be but so sad. He clenched the regular season championship this weekend with enough points after his 4th place finish, so he has something to be happy about.

The interesting part of the entire interaction is that it’s definitely not the first incident with those two. Back during Fontana, Kyle Larson denied that the hit was intentional, stating that he was too busy looking in the mirror and worrying about Logano side-drafting him. Whether there’s truth to that or not, we will never know. What I do know is that as a spectator, it appeared that the hit was intentional. And I don’t even fault him for that. That’s part of racing, especially for the win at the end. During this race at Watkins Glen, Larson got a push from Allmendinger that gave him momentum into the turn and nosed him ahead of Elliott. The hit was consequential of that push from AJ. It’s okay to be disappointed, but I think that Chase handled it as well as could be expected. He was disappointed, and that’s fine, but he didn’t throw his teammate under the bus. AJ Allmendinger and Joey Logano snuck between Elliott and Larson to take 2nd and 3rd place. Daniel Suarez had a very respectable 5th place finish after a slew of tough runs lately. Michael McDowell, Tyler Reddick, Christopher Bell, Chris Buescher, and Erik Jones rounded out the top 10 spots.

This weekend, the drivers are simply trying to do anything they can to secure their positions in the playoffs. With this weekend’s race at Daytona closing out the regular season, there’s no telling what’s going to happen. Daytona is a crazy race regardless but put it at the end of a season that requires drivers getting as many points or a win to get their spot to be in championship contention, well, you have yourself a wreck fest, I’d imagine. Daytona is a prestigious track with the inception of the Daytona 500 in 1959. That’s quite a rich history. This 2.5-mile asphalt track is a bucket list item for many fans, myself included. It boasts 31 degrees of banking in the turns and 18 degrees through the tri-oval. The backstretch is a mere 2 degrees. That level of banking through the turns creates some serious speed, although the advent of restrictor plates and the change in these cars’ aero package in recent years have really stifled the speeds that we used to see. These drivers were easily hitting 200mph+ for a good portion of the race, but that is a rarity these days. Don’t get me wrong, speeds are still high, but things have definitely changed with the cars. When it comes to Daytona and winning, it’s all about setting the car up correctly. Track position is everything, but making sure you bring a car that can maintain the speed necessary is also important. The evolution of drafting at Daytona is also something to keep your eyes on. In the past, we’ve seen many different forms of successful drafting, but I’m still not sure how to qualify what these current cars do. With the restrictor plates, the under plates, and the overall just weird aero package, if we’re being honest, doesn’t lend itself to the typical drafting that we saw in years past. The cars also have a hard time bump drafting, so I’m not really sure that single file or double car drafts are going to be a thing. We’ll likely still see a couple of line drafts, but the cars definitely don’t hook as they used to, which used to allow drivers to basically lock together and push each other through the field.

Picking winners for Daytona is like throwing a deck of cards in the air and trying to grab the ace of spades. I mean, there are statistically significant differences between some of these drivers, but overall, you just never know what this race will bring us. What we also have to remember is that this is the last chance that any of these guys have to get a spot in the Chase. That means that someone is going to take a risk. The other thing to keep in mind is that the guys that are already locked into the Chase are probably going to take some risks themselves to get as many points as they can so they’re set up well for the playoffs. They can also use this as a “testing” opportunity for the remainder of the season. Overall, JGR, assuming no cheating occurs, will have a strong shot this weekend. Denny Hamlin is good at Daytona. In fact, he’s got 3 Daytona 500 trophies to prove it. Now, if this year has anything to do with his results this weekend, he’ll need a little luck on his side…and also to steer clear of Ross Chastain. Hamlin finished 37th in the season opener due to an accident, so he’ll need to avoid that at all costs. There were 13 cars in the 500 involved in a wreck that prevented them from being in contention there at the end, so there’s that. We always have the chance that a good portion of the field is going to wreck themselves out, and the likelihood of that happening in the last regular season race is probably much higher. Let’s take a look at your potential winners heading into this Saturday night’s big race:

With a 2nd place finish at the 500 earlier this year, this might be Bubba’s best shot at having any hopes of making the playoffs this year. He’s had some of his better finishes on the bigger tracks this year, including a 2nd place at Michigan and another top 15 at Atlanta. Wallace struggles on the smaller formats, but if he’s got anything for the win, this is his chance to show it. Austin Dillon is another driver with the opportunity to make the playoffs this weekend by capturing the win. Although Daytona wasn’t his best performance, he did swing a 2nd place at Talladega earlier this season. They’ve struggled here in the latter part of the year, but a great redemption would be to take the win, especially in the #3 car. I do believe that the Gibbs drivers are going to bring something this weekend, though. With Hamlin’s success at Daytona in the past coupled with his success this season at Charlotte and some of the other bigger tracks, he’s got a good shot this weekend. What does he have to lose? Hamlin is already locked in after a couple of wins in 2022, so he’s just padding his bank for the playoffs at this point. Let’s see where these guys are sitting as we head into this closing race of the 2022 regular season:

Out of those 16 drivers, Ryan Blaney and Martin Truex Jr. are currently in by points only. Neither has a win. That said, Kurt Busch is currently sitting in 22nd, but because of his win this season, he’s going to bump Truex from the playoffs unless something miraculous happens. Truex has a lot of pressure on him if he plans to make the top 16. It’s not a bad opportunity this weekend to see if he can make something happen. Ryan Blaney needs to play it safe, as he could also get bumped if he’s not careful. Regardless, both of those guys have had less than stellar seasons compared to years past. We’ve seen some redemption stories in the playoffs, so maybe that’s what they’re waiting for. Who knows?! This weekend’s closing race of the regular 2022 season is sure to be one for the books, though. A superspeedway, a night race, and drivers on the bubble are surely components that are going to bring us one exciting race. Stay tuned for an eventful Saturday night as the drivers fight their last fight for their chance at a playoff berth for the 2022 season!