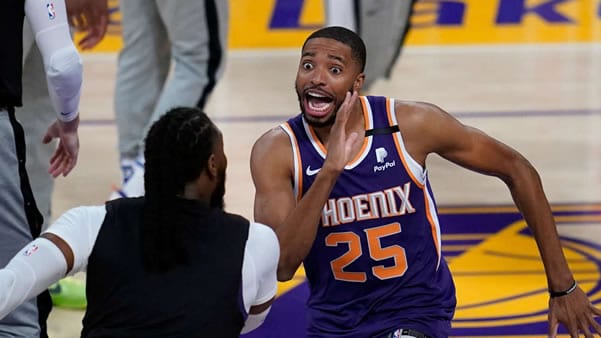 Boston was off to a 2-1 start this month but have since dropped their last two games and settled to an even 13-13 record. Their last two games were against both Los Angeles teams and ended in a sub-par offensive effort. Boston is 2-3 with their six-game road trip ending in Phoenix and will look to head back home above .500%. The Celtics squad is led by Jayson Tatum at 25.7 PPG and leads the team in assists per game at 8.8. As a team, the Celtics are averaging 108.7 PPG offensively and 107.2 PPG defensively, giving them a 1.5-point differential.

The Phoenix Suns put together an impressive streak of basketball to start the season that we may not see again for a long time. Last Friday, the Suns had their franchise-record 18 game win streak ended against the Warriors. The last time on the floor, the Suns bounced right back in a win over the Spurs. While a 4-point win was closer than expected, the team was without guard Devin Booker and will be without him again against the Celtics as he deals with a hamstring injury. Despite missing a few games this season, Booker leads the team in scoring with 23.2 PPG. Phoenix has the league’s 4th best scoring offense at 111.4 PPG and 7th best scoring defense at 105.0 PPG. The team’s 6-4-point differential is also 3rd best in the NBA.

Looking at the pace for this game, the visiting Celtics sit 12th for pace with 102.6 possessions a game. Just a month ago, Boston was in the top 3 of the league for pace, but with the absence of Jaylen Brown, the team has slowed down with the lack of shots from range. Adding to the team’s three-point shooting in this game, it would make sense to see Marcus Smart start to take more shots from range to take some of the perimeter pressure off Tatum. The Phoenix Suns currently sit as the 6th fastest team for pace with 103.3 possessions per game. Like the Celtics, Phoenix has also seen a decline in pace over the past month, due in part to Devin Booker’s recent missed time. With Chris Paul running the point solely in this one without sharing duties with Booker, we may see another “below average” paced game for the Suns as with his age, Paul is usually in no hurry to get the ball in the frontcourt. A slower-paced game would allow the Celtics to stay within striking distance so long as they can win the fourth quarter like they did the last two games.

With exception to their last two games, the Celtics have shown better stretches on the road than at home. Out of their 14 ATS wins on the season, 10 of them have come on the road. More recently, the Celtics are 5-2 ATS in their last seven games when playing as a road underdog. Going into Friday’s game in Phoenix, trying to cover won’t be easy against a team with an 11-2 home record. One thing to ease the mind for Boston bettors, though, is that the Suns are 6-7 ATS at home this season and on an 0-2 streak covering the spread at home.

While the Suns are favored in this one, they will be without their best scorer, Devin Booker. In their three games without him, the team has averaged 102.3 PPG, a full nine points less than their season average. Part of their scoring slump has been their decreasing three-point shooting attempts, as in their last three games, they’ve averaged 24.0 attempts, 6.5 less than their season average. While other Suns players have stepped up to get the job done, winning two of the three games without him, they will be tested against the Boston defense, which allows a 5th best 43.8 FG percentage on the road.

Friday’s matchup will be the first time these teams have met since April. Looking back at the last two years, the teams split each season series. In the most recent April matchup, the Celtics secured a 99-86 win in Boston.

How the Public is Betting the Celtics vs. Suns

76% are betting the Suns to cover the spread.

This matchup between the Celtics and Suns will be without one of each team’s key scorers. The Celtics have fallen short the last two games on the road but have an opportunity to make a statement against one of the top teams in the west. While the Suns are at home, where they often win, they have struggled to cover the spread as of late in their scoring slump. Take the Boston Celtics to beat the 5.5-point spread.

Looking at the total in this one, I also see value in the total. Again, taking into consideration that Jaylen Brown and Devin Booker will not be on the floor, we will see some slower-paced offenses, resulting in fewer shots and fewer points. Also worth noting is Boston’s admirable road defense and the Suns’ defense allowing just 103.9 PPG at home. Take the UNDER on the 216.5 total. Bet your Suns vs. Celtics pick and ALL your NBA picks for FREE this week by taking advantage of a 100% REAL CASH bonus on your first deposit of $100 to $300 at MyBookie Sportsbook! (Must use bonus code PREDICT100 when registering!)