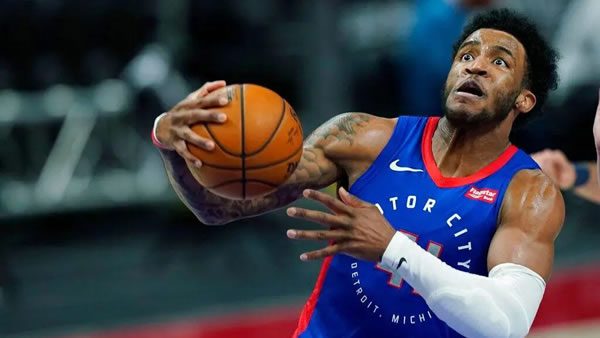 Most recently, Milwaukee lost to the Cavaliers by a score of 114-102. Jrue Holiday and his 28 points were not enough for the team to pull out a win as 3 point underdogs. The Bucks also finished with an ATS loss in the game.

Heading into the game, Detroit is 12-36 overall. When playing at home, Detroit has a mark of 6-17 and a win percent of 26%. Currently, the team is 15th in the Eastern Conference. So far, they are 21-26-1 vs the spread. The Pistons need a win in today’s matchup vs Milwaukee to avoid their 4th straight loss.

In their most recent game, Detroit was unable to come home with a victory against the Bulls, losing by a score of 126-108. Despite Bojan Bogdanovic leading the team with 25 points, the Pistons were unable to overcome their status as 7-point underdogs. The Pistons also ended up with an ATS loss in the game.

In the most recent game between the two teams, the Bucks picked up a 110-108 win over the Pistons. However, heading into the game, Milwaukee was favored to win by 13.5 points, giving the Pistons and ATS victory. So far this season, the Bucks have a record of 2-0 vs. the Pistons. The Bucks have had the better record vs. the spread over the last 5 games, going 3-2. The team’s average scoring margin in these contests sits at 14 points per game. Over the course of these games, they averaged 216 points per game, leading a 0-4-1 over-under record.

Coming into the game, Milwaukee’s offense is ranked just 24th in scoring at 112.4 points per game. This has come while being the 16th-ranked unit in pace. So far, the Bucks are averaging 99.4 possessions per contest. The three-point shot has been a big part of Milwaukee’s offensive game plan, as they are ranked 5th in 3-point attempts per game. So far, they have connected on 35.5% of their looks from the outside. On defense, the Bucks are allowing an average of 112.13 points per game, placing them 19th in the league. So far, opposing teams are hitting 35.73% of their looks from deep vs. Milwaukee.

Going into today’s game, Giannis Antetokounmpo is the leading scorer for the Milwaukee team with an average of 31.0 points per game. This season, his field goal percentage is 52.4%. The team’s second top scorer is Jrue Holiday, who is averaging 19.6 points per game.

Coming into the game, Detroit’s offense is ranked just 25th in scoring at 112.0 points per game. This has come while being the 13th ranked unit in pace. So far, the Pistons are averaging 100.0 possessions per contest. When looking at the team’s 3-point shooting numbers, they profile as an average team in both percentage and attempts. For the season, the Pistons’ offense is ranked 17th in 3-point attempts per game while connecting at a rate of 35.5%. Defense has been a struggle for Detroit, as they are currently allowing 112.55 points per game. The team’s 3-point shooting defense has been a problem this year. So far, opposing offenses have hit 36.41% of their looks from the outside.

Bojan Bogdanovic is the top scorer for the Pistons, with an average of 21.3 points per game. This season, his field goal percentage is 48.6%. Jaden Ivey is the team’s second-leading scorer, averaging 15.2 points per game.

More Picks: Get our San Antonio at Portland 1/23/23 betting analysis plus free pick >>>

The Detroit Pistons are obviously a young team trying to find their identity and also a player for the number one pick in this year’s NBA draft. With that being said, you know they’re bad, I know they’re bad, the bookies know they’re bad… Do you really think the house is going to give you a free square? The Pistons are poor, but they have a threshold. That number is somewhere between 9-12 points in line value. With tonight’s line being +11.5, I think they have a good shot of covering. Note: This threshold I refer to only applies to HOME GAMES. This is also a bad spot for Milwaukee in that it’s a look-ahead game against the Nuggets at home in their next contest. I doubt they take this game seriously. I’m betting the Pistons plus the points. Bet your NBA predictions for FREE this week by scoring a 100% real cash bonus on your first deposit up to $500 when you use promo code PREDICTEM at Betnow Sportsbook!