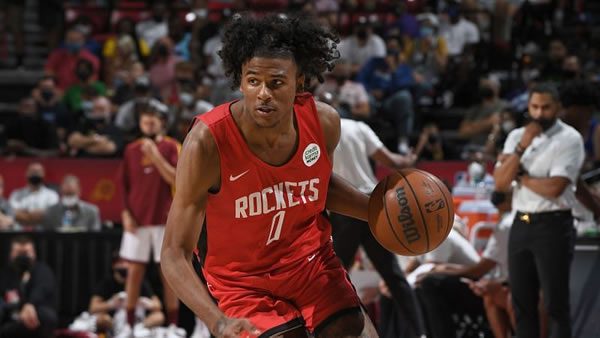 The Houston Rockets enter today’s game, having lost seven straight games. As of late, the Rockets have really struggled to pick up wins, having won just one of their past nine games.

As the road team, the Rockets travel to Golden State with a negative plus-minus of rating -8.8 points. Overall the Rockets are ranked 26th among NBA teams in point differential (-7.9). Among NBA teams, they have played the 14th toughest schedule.

For bettors, taking the Houston Rockets to cover the spread has been a winning bet as they are covering the spread in 55.60%% of their games. Their season-long plus-minus against the spread is 1.4.

On offense, the team’s leading scorer is PF Christian Wood. So far, Wood is averaging 19.0 points per game. Wood has shown versatility as the team leader in rebounds, grabbing 13 rebounds per game.

The Rockets’ best three-point shooter has been Eric Gordon, connecting on 2.25 shots from downtown per game.

The Golden State Warriors enter today’s game, having won 3 straight games. The Warriors have played at an above .500 rate in their past eight contests, going 7-1. This has come while playing the 28th toughest schedule.

As they get set to host the Rockets, Golden State has a positive home plus-minus of 16.6 points. Overall the Warriors are ranked 1st among NBA teams in point differential (0.9).

Despite their bad overall record, taking the Houston Rockets to cover the spread has been a winning bet as they are covering in 62.50% of their games. Their season-long plus-minus against the spread is 7.8.

On offense, the team’s leading scorer is PG Stephen Curry. So far, Curry is averaging 25.75 points per game.

The Warriors’ best three-point shooter has also been Curry, as he is connecting on 4.88 shots from downtown per game.

Draymond Green has been in charge of cleaning up the glass, hauling in 8.75 boards per game.

Both the Houston Rockets and Golden State Warriors play at a pace among the fastest in the NBA. Historically, when the Warriors play other fast-paced teams, they win 66% of the time, the Rockets come in at 33%.

Golden State Is A Defensive Team

To start the season, the Warriors have been the second-best team in defensive rating. On average, opponents are scoring 101 points per game. When Golden State faces off vs. struggling offenses, they hold them to 1 point per possession below the league’s expected output. This strong defense has led to a winning percentage of 72%.

As bad as things have gone for Houston, their defense has been playing like a league-average unit. So far, teams are scoring 111 points per game, with an effective field goal percentage of 52%. When the Rockets play quality offensive teams, opponents score 5 points per possession above the league average.

Last season, the Warriors owned this season series, winning three games to 0. Combined, Golden State outscored the Rockets 346-290. The closest game between the two teams was a 108-94 win for the Warriors.

How the Public is Betting the Rockets vs. Warriors

67% are betting the Warriors against the spread.
57% are wagering on the game to go under the posted total of 222.

Despite the Warriors being a quality defensive team, their opponent’s top scorers consistently score more than their average output. While the Rockets roster isn’t filled with top-flight scoring options, I see them scoring enough to cover this spread.

Although there are no prop bets available, I recommend looking at Christian Wood and Steph Curry as candidates to go over their play prop totals.