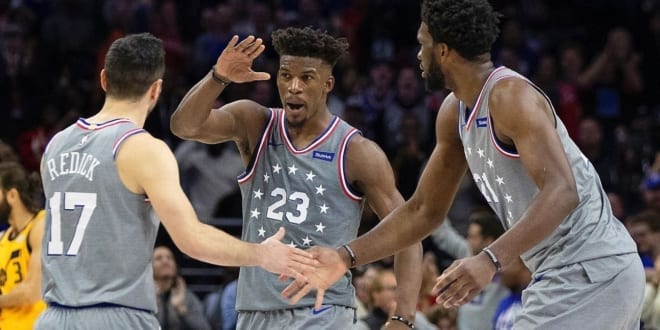 Takeaways From Philadelphia and Boston’s Most Recent Games

Unlike their opponents, the 76ers have been in overall good form as of late as they have gone 3-1 SU in their last four outings. At the moment, the Sixers currently sit 2.5 games out of first place after winning their most recent contest against the conference-leading Toronto Raptors on Saturday. This collision will undoubtedly be of importance to Philadelphia in particular as a win here puts them three games ahead of Boston in the division race.

How the Public is Betting the Boston-Philadelphia Game

Presently 62% of the betting public fancy Boston as the marginal home favorite. In light of this, we have yet to see the line budge as a result.

Over the last ten meetings between these two Atlantic Division rivals, Boston has won eight of those contests. Boston rolled Philadelphia in their season openers on October 16th where the Celtics defeated the Sixers 105-87 in Beantown closing as a five-point favorite. This was a game where much of the public fancied the Sixers with the points and as a result sets the stage for a “zig-zag” here on Christmas Day. The Celtics also defeated the Sixers in five games in the Eastern Conference Semifinals in the 2018 playoffs which also influences this market greatly.

Celtics Center Al Horford is now out indefinitely due to Patellofemoral Pain Syndrome. Big Al’s absence will certainly wield a blow to Boston’s defensive play as he is a key component of that effort. Moreover, Horford’s presence in the paint would serve as an asset to give Boston a better chance to rub elbows with Philadelphia’s ball-hawking front court.

The Celtics employ an in-your-face defense that has long since become their calling card. The Celtics presently own the fourth-ranked scoring defense (104.8 points per game) while allowing opponents to shoot just 44.1% from the field (4th in the NBA). Boston has produced similar success in limiting three-point effectiveness as they are third in the league in opponents shooting from beyond the arc (32.8%). The Celtics will look to yield this approach to vanquish the Ghost of Christmas Past as they enter into this contest with a 13-18 SU record in Christmas Day games.

Philadelphia Will Indulge In Holiday Treats Thanks To Effective Offensive Rebounding

Offensively, Boston shoots a 20th-ranked 45.3% from the field which is significant given the fact they are up against a Philadelphia team that sits tenth in the league in field goal efficiency (46.9%). It is certainly conceivable that Philadelphia is in position to win easy here if they outshoot the Celtics who seem to struggle in this aspect of their game. Furthermore, the Sixers are also the fifth-ranked team in offensive rebounds generating 47.5 offensive boards per game. This edge will be essential in creating second chance opportunities in a game that is prognosticated to be a close one. A flaw in Boston’s defense is their generosity in defensive rebounding as they sit 19th in the NBA with 45.5 boards per game. This will give Philadelphia more chances to test Boston’s defense and that plays ideally into their hands. Be that as it may, the Sixers will be confident heading into this venue in particular as they are 17-13 SU in Christmas Day games.

There are several trends that sell the Celtics here in this scenario. First, the Celtics are 5-1 ATS in their previous six outings against Philadelphia. Moreover, Philly has not covered in their last four contests in Boston. On another note, the Over is 9-4 ATS in the last 13 contests played in Beantown.

The best prices from betting sites dictates the play here as we appear to have the better team at the better price in this spot. According to Scores and Odds it is Boston not Philadelphia that should be the underdog here but thanks to several narratives influencing this market, the line is subjecting takers to what appears to be a clear-cut overlay on the Celtics. There will be huge emphasis on two plot lines concerning Boston in this Christmas Day clash. First, their overall supremacy in this rivalry series and their profitability against the spread while doing so. Second, many critics will also highlight Philadelphia’s overall poor road record on the year at 6-9 SU. Both of these variables steer action away from the Sixers and allow the market to take advantage by pricing the Celtics as the favorite here. However, just last year Philadelphia ventured to the Big Apple to face off with the New York Knicks in a Christmas Day game where they pulled out a 105-98 victory over their arch-rivals in a hostile setting. On the contrary, the Celtics lost at home to the Washington Wizards in their 2017 Christmas Game. It is worth noting that the Wizards were a team that held an infamous reputation for their road play in the 2017-18 season. The Sixers are playing better basketball at the moment and they will use their positive experiences in Christmas contests to put together an effort to halt Boston’s dominance in this rivalry series and bring themselves some Christmas cheer. We’ll trade the points away with confidence here to maximize our return.