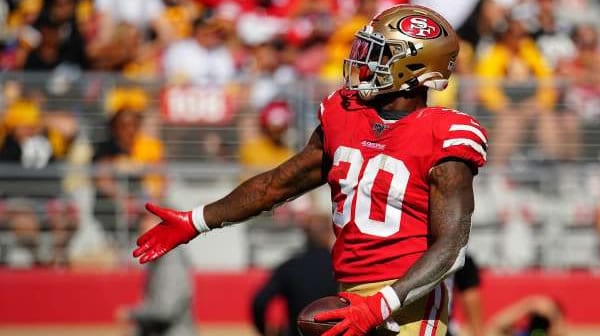 This game could be named the Injury Bowl, as both of these teams were just decimated by injuries in Week 2 and barely resemble themselves after hobbling through Sunday. San Francisco is now down two running backs after knee injuries to Raheem Mostert and Tevin Coleman, but the 49ers are actually in relatively better shape than the Giants on that front, as at least their running backs might actually make it back this year.

Conversely, Saquon Barkley is done for the year, leaving the Giants to adjust on the fly. But New York was able to respond against Chicago and nearly pulled off a comeback victory on the road, ultimately falling one play short against the Bears. With San Francisco hurting and the Giants about to play back-to-back road games at the Rams and Cowboys, this might be the best chance New York has to avoid an 0-5 start. However, this is an odd situation, as San Francisco had less travel than the host Giants for this game. The 49ers are playing in the same stadium they were in a week ago when they routed the Jets, which could leave them fresher than their opponent.

How the Public is Betting the 49ers/Giants Game

The total has dropped half a point to 41.5, but the number is quickly moving toward the Giants, falling from -6.5 to the current -4.

San Francisco:
It might be easier to list who ISN’T injured. Quarterback Jimmy Garoppolo is questionable with a high ankle sprain. Wide receiver Tavon Austin is out with a knee injury, as are running backs, Tevin Coleman and Raheem Mostert. Tight end George Kittle is probable with a knee injury. Cornerback Richard Sherman was placed on injured reserve with a calf injury, and defensive linemen Nick Bosa and Solomon Thomas are both out for the year with a torn ACL. Wide receiver Travis Benjamin and offensive lineman Jake Brendel are opting out for the season, as is tackle Shon Coleman. Defensive lineman Dee Ford is out with a back injury, and linebacker Dre Greenlaw is questionable with a thigh contusion. Wide receiver Deebo Samuel is out with a fractured foot.

New York Giants:
Running back Saquon Barkley is out for the year with a torn ACL. Wide receiver Sterling Shepard was moved to injured reserve with turf toe, while linebacker Carter Coughlin is questionable with a hamstring injury. Corner Sam Beal and wide receiver Da’Mari Scott have chosen to sit out the season and tackle Nate Solder and corner Shakial Taylor. Wide receiver David Sills is out with a foot injury.

The 49ers have announced that barring a quick recovery; Nick Mullens will get the start against the Giants. This won’t be the first time that Mullens has gone up against Big Blue, as he faced the Giants in 2018 and came away with a 27-23 loss after throwing one touchdown and two interceptions. Mullens will not make anyone forget Garoppolo, but he’s a decent, capable backup who can absolutely keep the 49ers’ heads above water if he can get help from his running game.

But what will his running game look like? Jerick McKinnon is the next man up for the 49ers, and while he’s an experienced back who has had success and can help in the passing game, there’s just no replacing what Mostert and Coleman brought to the table. Jeff Wilson is the other main back for San Francisco, and he will have to step up in his biggest game as an NFL back. He scored 30 touchdowns in his final two seasons at North Texas, but he’s mostly been a reserve for the 49ers since joining them in 2017.

The main question is whether San Francisco can exploit New York’s poor run defense. The Giants gave up an average of 138 yards on the ground to Pittsburgh and Chicago. If San Francisco can punch holes in the Giants’ subpar front seven, they won’t have to worry about attacking the Giants’ secondary and star corner James Bradberry.

Devonta Freeman will try to become the man for the Giants with Barkley on the shelf, but a lack of experience with New York’s system means that this game will fall to Daniel Jones. The Duke product certainly has the raw talent to develop into a top quarterback. Still, some of his decisions are often head-scratchers and certainly not what you’d expect from someone who played for an elite academic institution.

Of course, Jones hasn’t exactly had a lot of time to make good decisions behind the Giants’ offensive line, which hasn’t been able to stand up to defensive pressure at all this season. Jones has been hurried 56 times this season, which is worse than everyone except Houston. The Giants weren’t able to run the ball with Barkley, as they’ve gained just 104 yards on the ground in two games. That puts even more pressure on Jones, and that’s trouble. The Bears got to Jones four times and forced a fumble, bringing back memories of last year’s league-leading 18 fumbles from Jones. If San Francisco can get in the backfield regularly, the Giants will be in big trouble.

The Giants have tended to play exactly to their expectations at home. When they’ve been expected to lose, they don’t cover, with just spread win in 12 games as a home underdog. New York has also been a rather lousy 7-18-1 ATS in its last 26 home games, and September hasn’t been a kind month to them, as they’re 4-9 ATS in their past 13 September games.

But the one thing the Giants have going for them is that it’s Week 3, and that’s when they’ve been at their best. Over the past six seasons, New York has covered in Week 3 five times, and San Francisco is the polar opposite. The 49ers have covered in Week 3 just once in the past eight seasons, and they’ve shown a tendency to play to their competition levels, covering just one in six against teams with a losing record. However, that tendency usually only shows up in San Francisco, as the 49ers have covered in four of five on the road.

This could be another day that lends itself to injuries, as the temperature will be 82 and humid, a bad combination for an already sticky turf field at MetLife Stadium.

I think this is going to be a defensive battle, as New York has failed to top 16 points in a game this season and San Francisco’s offense is really in shambles after all of the injuries. For me, this feels like a game where 20 points will be enough to win if either team is even able to get there. I want to grab the under early before it drops another point or two.

As for this matchup, I think San Francisco’s defense can pressure Jones enough to create the play they’ll need to pull off the victory, and the line is moving toward the Giants anyway. I’m comfortable giving four to this Giants team, as I think San Francisco has just enough to get out with a cover. Bet your Week 3 NFL picks for free by grabbing a 100% real cash bonus at one of the web’s best sportsbooks:MyBookie! (Offer good for deposits of $100 to $300!)