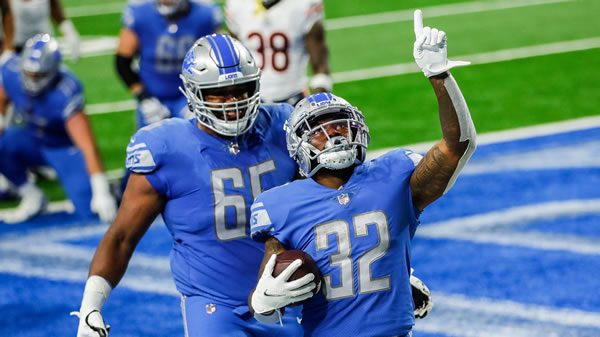 The Bengals conclude the NFC North portion of their slate when they visit Detroit to take on the luckless Lions Sunday afternoon. Cincinnati is already three games through the Black and Blue Division, beating Minnesota but losing by field goals to Chicago and Green Bay. The Lions, meanwhile, are trying to halt a nine-game losing skid and give Coach Campbell his first victory.

The Bengals aren’t usually lined as road favorites, but they are here; how are we playing this game with our free NFL betting pick?

The Week 6 NFL betting odds opened the Bengals as 3.5-point road favorites over the Lions, with an over/under of right around 49. Early betting action then dipped that total a point and a half to 47.5.

Cincinnati is 3-2 on the season after falling at home in overtime to Green Bay last week 25-22. The Bengals led 7-0 early but trailed 16-14 at the half and 22-14 late. Cincy then tied the game with a touchdown and a 2-point conversion with three minutes left, and then things got crazy. First, the Packers missed a field goal with just over two minutes left; then the Bengals missed one with 26 seconds left; then the Packers missed another one at the buzzer, sending the game to OT. Then Green Bay missed another field goal, then Cincinnati missed another one. Finally, Packers K Crosby hit one with two minutes left in overtime to give the Bengals their second three-point loss of the season.

Two weeks ago, the Bengals came from behind to beat Jacksonville 24-21, and three weeks ago, they won at Pittsburgh 24-10. At 3-2 overall, Cincinnati is tied for second place in the tough AFC North, one game behind 4-1 Baltimore.

Detroit, meanwhile, is a tough 0-5 this season after falling at Minnesota last week 19-17. The Lions, playing as 10-point underdogs, fell down 13-3 in the second quarter and trailed 16-3 late. But they then scored twice in two minutes and took a 17-16 lead on a ballsy 2-point conversion with 37 seconds left. Unfortunately, in true Lions fashion, they then gave up 46 yards in three plays and lost on a 54-yard Vikings field goal at the buzzer.

At the moment, Detroit just can’t seem to put four full quarters together.

These two teams met most recently four seasons ago, a 26-17 Cincinnati victory. But that’s a quarterback ago for both teams.

Unders are 4-1 in Bengals games this season, which are averaging (without overtime) 42 total points.

The Under is 3-2 in Lions games this season, which are averaging 47 points.

Four of Cincinnati’s five games this season have been decided by exactly three points. Three of Detroit’s five games have been decided by one score, two on field goals on the last play of the game. The Bengals might seem an obvious favorite here, but have they proven themselves win-ners on the road? On the other side here, aren’t the Lions overdue for a bit of football luck to go their way? We see another close game here, so we like Detroit plus the points. Did you know… that you could be betting on games at -105 odds instead of -110? Why pay more for odds? It’s dumb! Spend 5 minutes to save yourself thousands of dollars in risk/vig by making the switch to BetAnySports! We’ve advertised them for 10 years with ZERO complaints!