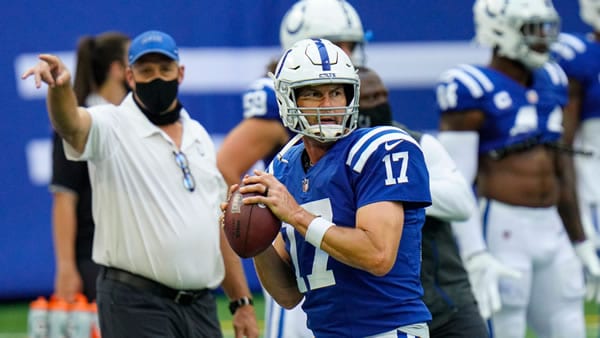 The Pittsburgh Steelers opened this season with 11 wins in a row; now, with weaknesses exposed, they’ve lost three straight, creating some serious doubts as to just how good this team is. And things don’t ease up for Pittsburgh this week with a key AFC battle against the Indianapolis Colts Sunday afternoon at Heinz Field. The Steelers opened as short home favorites for this game but NFL bettors, showing little faith, steamed them into short home dogs. Who do we like here for our Week 16 NFL pick?

Week 16 NFL betting odds opened this game with Pittsburgh favored by a field goal, with an over/under of right around 46. Early betting action then flipped Indianapolis into a 1.5-point favorite and dipped that total to 45.

Indianapolis rides a three-game winning streak into Sunday, after holding off Houston again last week 27-20. The Colts bolted to a 14-0 first-quarter lead but only led 14-10 into halftime. Indianapolis then allowed the Texans to tie the game at 20-20 midway through the fourth quarter but immediately drove 75 yards to a touchdown. The Colts then clinched the victory by forcing and recovering a Houston fumble in the end zone with 19 seconds left on the clock.

However, the Colts couldn’t quite cover the spread as 7.5-point favorites.

Indianapolis actually got out-gained by the Texans 425-350 but out-rushed Houston 127-83 and won the turnover battle 2-0. So the Colts have now been out-gained three times over their last four games but they’ve also out-rushed six of their last eight opponents.

Two weeks ago Indianapolis pulled away late to beat Las Vegas 44-27, and three weeks ago the Colts beat those same Texans 26-20 when they recovered a Houston fumble inside the Indy 5-yard line in the final moments.

At 10-4 overall Indianapolis is tied with Tennessee for the lead in the AFC South, although the Colts would lose the tie-breaker based on records in divisional play. Indianapolis also owns the No. 6 spot in the AFC playoff standings but it’s also only a loss and a Baltimore victory away from the No. 8 spot, which gets nobody anywhere.

If the postseason started today the Colts would play these same Steelers on this same field in an AFC wild-card game.

Pittsburgh, meanwhile, lugs a three-game losing skid into Sunday, after falling at Cincinnati Monday night 27-17. The Steelers, lined as 14-point favorites, came out completely flat and trailed a bad but fired-up Bengals team 17-0 at the half. Pittsburgh got within 17-10 in the third quarter and 24-17 with five minutes left but could get no closer, taking one of the more embarrassing losses in the League this season.

The Steelers only allowed 230 yards of Cincinnati offense Monday night but only produced 244 yards of their own. Pittsburgh also got out-rushed by the Bengals 152-86 and lost the turnover battle 3-0, resulting in a -17 points differential.

Two weeks ago Pittsburgh lost at Buffalo 26-15, and three weeks it lost to Washington 23-17.

At 11-3 overall the Steelers’ lead in the AFC North is down to one game over second-place Cleveland, with a showdown against the Browns next week. Pittsburgh also owns the No. 3 spot in the AFC playoffs standings at the moment but a couple more losses to end this season could conceivable drop the Steelers as far as the seven spot.

When Last We Met

These two teams just met back in Week 9 of last season, a 26-24 Pittsburgh victory. Mason Rudolph quarterbacked the Steelers that day against Brian Hoyer for Indianapolis. The Colts would have won that game but K Adam Vinatieri missed a field goal with a minute to go.

Overs are 8-6 in Colts games this season, which are averaging 51 total points.

Unders are 7-5-2 in Steelers games this season, which are averaging 45 points.

These teams are headed in different directions as of late. The Colts are running with a hot back in rookie Jonathan Taylor, while the Steelers are struggling mightily in the run department. You’d think Pittsburgh would bounce back one of these weeks but that will be tough against this well-balanced Indianapolis team. We don’t usually like going along with the betting flow but we’re betting the Colts here. Note: Did you know that you could be betting on games at -105 odds? Don’t care? You should! Spending 5 minutes to sign up at BetAnySports will save you THOUSANDS of dollars in vigorish over the years! Make the switch! You’ll be so glad you did! Click here to start having a better betting experience!