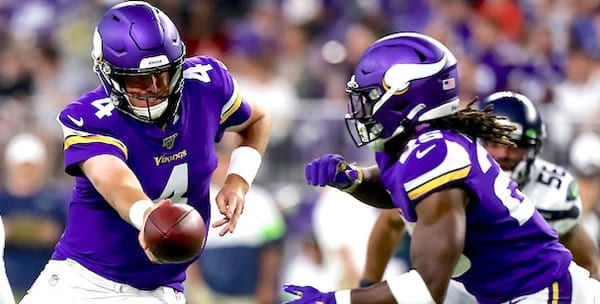 Week Two in the NFL is often about overreacting to Week One. Some things went the way we thought, and some went the complete opposite. It is our job to navigate the small sample size and pick out the substance from the smoke to find the best predictors for what is coming next. The Minnesota Vikings head to Lambeau to take on the Green Bay Packers this weekend in what looks like one of the closer on-paper contests. These teams are no strangers to each other and the winner Sunday gets a nice jump on a division race that is expected to come down to the final weeks.

Green Bay GM Brian Gutekunst made several moves in free agency, and all seemed to pay off during the opening game win. Preston Smith and Za’Darius Smith were brought in to solidify the pass rush, and both notched a sack against Chicago. Safety Adrian Amos spoiled a potential comeback by his former team with a game-ending interception late and 1st round draft pick Darnell Savage also played a solid game in his debut. Green Bay held Chicago to just 20% on third-down conversions and recorded five sacks in what could be a preview of things to come for a defense that is reportedly better than any the Packers have had for nearly a decade.

Minnesota has one of the best receiver duos in the league with Adam Thielen and Stefon Diggs both hitting 100 catches and 1,000 yards last year, but the Vikes took the air out of the ball last week against Atlanta. Minnesota ran the ball 38 times with Dalvin Cook and Alexander Mattison both averaging over five yards per carry against the Falcons. Kirk Cousins only attempted ten passes, but he added a one-yard rushing score to get in on the run-game fun and Minnesota converted on 50% of third downs for a decisive opening win. Green Bay looks to have a top-notch secondary with Jaire Alexander and a healthy Kevin King patrolling the outside so look for the Vikings to stay run-heavy in the early going this week.

More Picks: Browns vs Jet Week 2 Pick Against the Spread >>>

This rivalry has not been short on juice since Brett Favre decided he would look good in purple and there has been plenty of back-and-forths, especially in recent years. Minnesota has won four straight in the series and five of the last seven against the spread. Aaron Rodgers has a 12-8-1 record against the Vikings in his career, averaging 252 yards and two touchdowns per game. Most impressively, he has thrown just six interceptions while compiling a 109.7 passer rating in 21 career games against Minnesota. The Vikings harassed Matt Ryan into two interceptions last week and piled up five sacks while holding the Falcons to 25% on third down. Green Bay managed just 2-for-12 on third down last week, making Rodgers the likely X-factor again. He may be down a weapon as Marquez Valdes-Scantling remains questionable for Sunday after leaving last week with a lower-body injury. MVS led the team with 52 receiving yards and would be replaced by return-specialist Trevor Davis.

Lambeau isn’t the gold standard of home-field advantages like it was in the 1990s, but Minnesota has struggled there, going 3-7 against the spread in their last ten in that building. The home team is 5-1 ATS in the last six in this series, and the Vikings are just 1-4 ATS in their last five following a straight-up win. Green Bay is routinely one of the squarest bets on a week-to-week basis, so I am a little surprised that they are only getting about 47% of the action with the token -3 for having home field.

Both teams looked good on defense last week, allowing just 15 points combined and those performances have made the under a very popular bet. The over/under total opened at 46 points but has quickly moved down to 44 and I think that puts it in the range where I want to take the over. Minnesota chose not to pass last week. It doesn’t mean they can’t. Even with those measly ten attempts, Cousins found both Thielen and Diggs for a 25-yard hookup each and Kyle Rudolph remains a reliable receiving option as well. The Packers faced off against what should be one of the best defenses in the league again last week, and they did so without any preseason reps where all of the number ones were on the field. They were going to get reps in Winnipeg before field conditions ruled that out, so last week was understandably rusty. I think both teams improve from Week One and Green Bay should be noticeably more efficient given they played last Thursday and get the extra work of that mini-bye. I don’t think the teams will cruise by the total, but 48 is more realistic in my mind than 43 or fewer.

Regarding the point spread, I think the Packers have an excellent chance to cover if they do in fact come out sharper on offense. They did allow five sacks against Chicago, and I expect Minnesota to bother Rodgers, but I also expect better running success for Aaron Jones to set up the Green Bay passing game. One noticeable factor for the Packers last week was the ten targets and six receptions by tight ends. Former coach Mike McCarthy did not favor that position, but Matt LaFleur used the TE to give Rodgers easy throws against what was expected to be an aggressive Bears defense. If nothing else, those tight ends will occupy a guy like Harrison Smith and allow Rodgers the ability to work to Davante Adams in single coverage. It is close, but I like Green Bay to sneak out an ATS win with a 27-23 score.