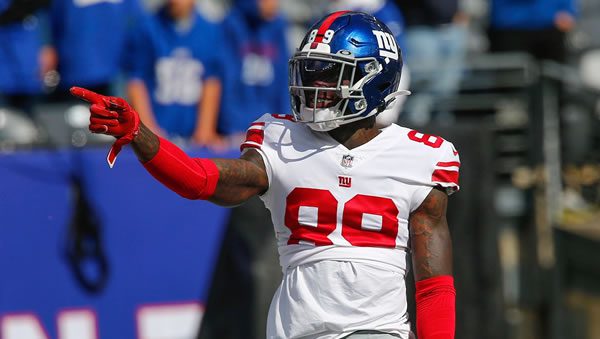 Point Spread: CAR -3/NYG +3 (Bookmaker - The BIGGEST and one of the OLDEST books on the web! Pays fast and accepts ginormous bets up to $50K!)

In what appeared to be such a promising start at 3-0 SU, the Carolina Panthers’ 2021 campaign has been derailed with three straight losses. The Panthers most recent defeat was their 2nd straight home loss to the Minnesota Vikings in overtime. The afternoon’s theme was similar to the prior two losses with star RB Christian McCaffrey sidelined and another dismal performance from QB Sam Darnold, who completed just 17 of 41 passing for 207 yards with one touchdown and one interception. The Panthers’ unproductive offense will be put to the test again on Sunday when they travel to MetLife Stadium for a date with the New York Giants.

At 1-5 SU, the Giants have not had many things to cheer about this season. The Giants were demolished by the Rams last Sunday in a 38-11 outcome. The Rams led 28-3 at halftime and seemingly called off the dogs in the 2nd half. Giants QB Daniel Jones suffered one the worst performances of his career, completing just 29 of 51 passing for 242 yards with three interceptions. With RB Saquon Barkley on the shelf again, the Giants failed to find any success on the ground, which played right into the hands of the Rams’ tough secondary. Injuries have hit the Giants hard this season, especially on the offensive side of the football, and while I don’t necessarily trust the Panthers offense; the Giants are going to face another difficult challenge against the Panthers underrated defense on Sunday.

In a rather surprising move, the Carolina Panthers moved RB Christian McCaffrey to the injured reserve on Sunday just hours before the kick-off with the Vikings. McCaffrey injured his hamstring in Week 3 against the Texas. The Panthers refrained from putting McCaffrey on the IR at the time because they felt like he would not miss three games which is required for going on the reserve list. To make matters even more confusing, most sources close to the team indicated McCaffrey was trending towards suiting up against the Vikings. Though nothing has been reported at this time, I would expect there may have been some type of setback discovered. Either way, the Panthers choice to put McCaffrey on the IR means that he will be ineligible until at least Week 9 against the Patriots.

To be honest, I don’t like either offense in this match-up. Both the Panthers’ and Giants’ offenses have been highly inconsistent. While the Giants’ issues have been injury-related, the Panthers are obviously being held back by the horrendous play of Sam Darnold. Luckily for Carolina fans, Darnold will get one of his best match-ups of the season against a Giants defense that is giving up just shy of 300 yards per game through the air. If there was ever a spot to get Darnold back on track, this should be it especially with the Giants’ non-existent pass-rush.

On the other side of the ball, I just don’t see many paths for success for the Giants offense. The Carolina Panthers defense is extremely stout along the trenches. Not only do the Panthers play well against the run, but they consistently apply pressure to opposing quarterbacks. The Panthers have struggled at times against the pass, which could be problematic considering the Giants have a wide array of options in the receiving corps from Sterling Shepard, Kenny Golladay, and the emergence of rookie WR Kadarius Toney. Toney was held out of last week’s battle against Minnesota but should return to the lineup. However, it is also worth noting that the Panthers may get CB Stephon Gilmore back in week 7. Gilmore was recently traded from the Patriots and is the former defensive player of the year. If he is available, that only increases the match-up advantage the Panthers defense should have in this match-up.

Jay’s Pick: Both offenses are struggling, but Carolina is clearly the better team in this match-up. I will take my chances with Carolina -3. Bet ALL of your Week 7 NFL football picks for FREE by taking advantage of a 100% REAL CASH bonus on your first deposit of $100 to $500 at GTBets Sportsbook!