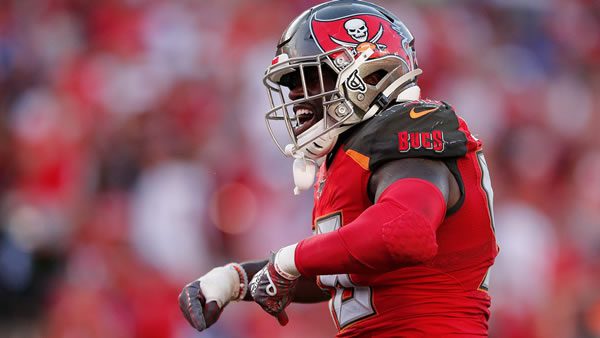 The Tampa Bay Buccaneers will meet the Washington Football Team at FedEx Field on Sunday as both teams return from a Week 9 bye. Washington has been riddled with injuries through the first half of the season, which has included injuries to starting QB Ryan Fitzpatrick, TE Logan Thomas, WR Curtis Samuel, and DE Montez Sweat, among others. Perhaps more concerning than the injuries woes is that Washington’s highly praised defense has underperformed since the season’s opening kick. In fact, the WFT defense currently ranks dead last in passing yards allowed per game and 3rd down efficiency.

Needless to say, Washington’s defense will be put to the test on Sunday against Tom Brady and the reigning Super Bowl Champions, who will be 10 point favorites. Like Washington, the Buccaneers are returning from a bye this week following a disappointing loss to the Saints in Week 8. The Week 9 bye seemingly came at the perfect time for Tampa Bay, considering they have also been hit hard with injuries in recent weeks. While Tampa Bay is not completely healthy, they are in a much better position than Washington and appear to have a prime match-up on Sunday to regain their momentum.

With so many key players showing up on the injury report this week, it is imperative that bettors keep track of availability and statuses as the week progresses. For now, take a look at the latest injury updates:

On paper, this is a nightmarish match-up for Washington, who is without one of their top pass-rushers and has been getting obliterated through the air all season. QB Tom Brady, despite being 44 years old, is having one of his best seasons in recent memory with 2,650 passing yards with 25 touchdowns, and five picks through the opening eight games of the season. Even with Antonio Brown potentially out another week, the Bucs have the personnel with receivers Chris Godwin and Mike Evans to provide plenty of sparks in the passing game. Additionally, I would say that RB Leonard Fournette has added another dimension to Tampa Bay’s arsenal in recent weeks. Fournette has taken sole custody of the Tampa Bay backfield and has rushed for nearly 350 yards with four touchdowns in the last five games despite the Buccaneers pass-oriented attack.

In this prime match-up, I don’t expect Tampa Bay to “struggle” by any stretch of the imagination unless Washington found a ton of answers during the bye week. On the other side of the ball, I have lost faith in Washington QB Taylor Heinicke in recent weeks. After a few decent performances following Fitzpatrick’s injury, Heinick has tossed just three touchdowns compared to 6 interceptions during Washington’s current four-game losing streak. RB Antonio Gibson has been beaten up and less productive than expected, and WR Terry McLaurin remains the only true playmaker for this WFT offense. With the way Heinicke has played in recent weeks, I am not even confident that he can connect with McLaurin on the passes that matter, much less sustain the consistency to keep pace with the Buccaneers offense. As a result, I am going to fearlessly lay the points with the Bucs.

Jay’s Pick: Tampa Bay -10. Make today the day you start saving money! It costs you NOTHING and only takes 3 minutes! Start laying only -105 odds at BetAnySports! Laying -110 for the very same win amount is NOT SMART!