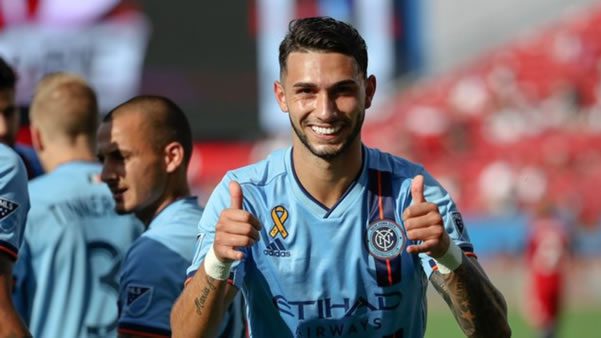 With six matches to go, the Red Bulls are just three points out of a playoff spot and could move into the postseason picture if they can get a win over NYCFC, who has really struggled against its Hudson River rival. Not only has RBNY taken four points out of a possible six against NYCFC, but the Red Bulls have gotten no worse than a draw in six consecutive meetings at Red Bull Arena.

Scoring has been at a premium for New York City, which has now gone three consecutive matches without finding the mesh. The Sky Blues are getting plenty of shots at the goal and controlling the possession, but they’ve been pretty wasteful with their chances and haven’t scored since Sept. 22 in this building. NYCFC had the better of the play in that match but conceded a penalty in the 12th minute of stoppage time in the second half and saw a 1-0 win turn into a 1-1 draw. With just one point in their past three matches, the Sky Blues are now sitting just above the cut line and need to get back on track if they’re going to return to the playoffs. However, with just one win all-time over RBNY in New Jersey, this could be a tough ask for NYCFC.

If the Sky Blues are going to get back into the winning column, Valentin Castellanos is likely to be the man to get them there. Castellanos has already scored 13 goals this season, good for third in MLS. The 23-year-old hasn’t scored in either of his past two starts, but before that, he had found the net in consecutive matches against these same Red Bulls and FC Cincinnati.

The last time the Sky Blues did find the net, it was Castellanos scoring off an assist from assist leader Maxi Moralez, which needs to be a partnership that gets back to finding the mesh. Moralez leads NYCFC with nine assists on the year, and this attack has to get back to actually taking the chances it creates if it’s going to reach the playoffs.

Scoring a lot of goals isn’t the way the Red Bulls like to do the job. Only four Eastern Conference sides have fewer goals than RBNY’s 34, and the Red Bulls have scored exactly one goal in 10 of their past 12 matches.

What makes RBNY difficult to predict is that there really isn’t one proven scorer on this roster that they can consistently count on to do the job. Patryk Klimala leads the Red Bulls with eight goals, but he’s only scored once in New York’s past four matches and hasn’t yet established a firm reputation as a top goal scorer in MLS. He has scored once in this derby, putting home the penalty that rescued a draw the last time these teams met in Red Bull Arena.

The most conservative way to play this is to take RBNY on a draw, no bet, as the Red Bulls have taken at least a point in six straight at home against the Sky Blues. However, backing RBNY to win might be a bit too aggressive because three of RBNY’s past four home matches have finished in a draw, which means that possibility can’t be dismissed. Given that five of the Red Bulls’ past six matches overall have seen two goals or less backing the under at -140 makes a lot of sense. However, we can do better, and I think we will by backing a draw and both teams to score. These teams were pretty even for their first meeting of the season, and the second saw NYCFC control two-thirds of the possession, which suggests that getting shut out at home was a fluke. With +320 odds available for the score draw, there’s a lot of value here.

I can’t see NYCFC getting shut down again in this one. There’s too much on the line for the Sky Blues to lay down against their rival, and I think they’ll get something out of this match even though it’s in their house of horrors. I like the Red Bulls to keep up their strong play, but I think there’s enough there for both teams to leave this match with a point. I’m backing a 1-1 draw at +525 here.