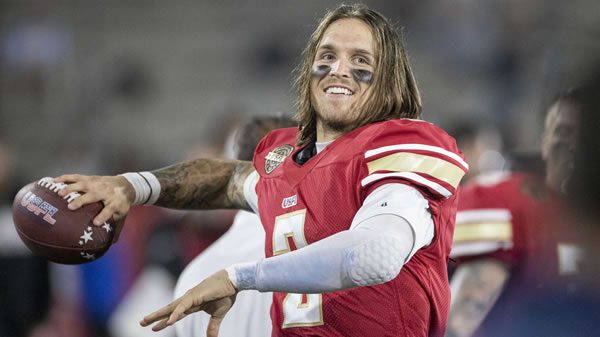 It’s the final week of the season in the USFL, and for Birmingham, it’s a chance to give their fans a proper sendoff for the year. The Stallions have unquestionably connected with the fans in Alabama, but the USFL will play the postseason in Canton, taking away Birmingham’s home-field advantage for the playoffs.

With that being the case, this marks the last time the Stallions will play in Birmingham in 2022, and that gives them more motivation to play hard than they might otherwise have. The Stallions know they’re facing New Orleans in the South Division championship game next week, but they also don’t have the depth on their roster to rest players, and they’d like to go in with some momentum after a poor showing last week against Houston.

For Tampa Bay, the question is whether the Bandits have anything left. They had a chance to make this game for all the marbles if they could beat New Orleans, but they couldn’t get anything going on offense and ended up with fewer than 17 points for the sixth time this season. The Bandits are still playing hard on defense, but the offense has been completely stuck in neutral for most of the past month, and it’s hard to see that changing against the Stallions.

The good news for the Bandits was that the passing attack was at least somewhat decent against New Orleans, as Jordan Ta’amu managed to throw for 288 yards and a score against the Breakers’ secondary. But that running game…yikes. Ta’amu was almost the entire offense against the Breakers, as he added 86 rushing yards to his 288, making him responsible for 374 yards of offense for the day. The rest of the Bandits’ total? One.

And that’s the problem for Tampa Bay: the offense has looked completely overmatched for the past three weeks. Struggling against New Orleans is one thing, but struggling to move the ball on Houston was quite another. The Bandits look like they’ve checked out entirely on the offensive line and the ground game, leaving nothing but a passing game that is effective at times but turns the ball over entirely too often. Rashard Davis was effective with six catches for 112 yards against the Breakers, but Ta’amu also threw two backbreaking interceptions that kept the Bandits from ever cutting into a 17-point deficit and threatening for a win.

Is Birmingham’s running game running out of gas, or are the Stallions intentionally holding back now that they have first place locked up? The Stallions couldn’t get the ball moving on the ground in either of the past two weeks, which suggests one of two things. Either Birmingham has been holding back and is waiting to unload on New Orleans next week, or the Stallions’ running game is a heck of a lot easier to deal with the second time a team sees it.

If it’s the latter, that bodes very well for Tampa Bay’s defense, which has been outstanding at keeping the Bandits in games. The Stallions’ struggles really came to a head last week against the Gamblers, as Birmingham only managed 78 yards on 24 carries, and not even Bo Scarbrough is getting it done anymore, scratching out a mere 2.8 yards per carry last time out. Having J’Mar Smith throw the ball 41 times really isn’t the way that the Stallions want to play, but with the run game not working and Tampa Bay being much stronger against the run, Birmingham might not have a choice.

Once again, the South Division kept up its defense-heavy performances, as the four South teams combined to score 55 points for the entire weekend and easily cashed the under in both games. None of the four South teams managed to top 17 points in either of the past two games, which suggests that the under is going to be the play in this final divisional matchup of the regular season. The recent defensive performances from the South teams have pulled the totals back to the over being just 20-16 on the year.

After covering seven straight to open the season, Birmingham has allowed both New Orleans and Houston to cover (and the Gamblers won the game outright), which still leaves the Stallions as the best team ATS in the USFL. Last week, Tampa Bay was the only underdog that failed to cover, and Birmingham the only favorite that failed to win. The favorites are 26-10 SU and 19-17 ATS on the year.

The good news is that there’s no rain to worry about in this game, but the heat could be disastrous on Saturday, as the temperatures are set to hit 95 degrees. Wind will blow at nine miles per hour to the north.

I think the under is the best play on the board here. I think the heat is going to really make it tough for either team to get rolling on offense, and both teams are defense-oriented anyway. As for the spread, I lean toward Birmingham to cover simply because of how poor Tampa Bay’s offense has been. I think the Stallions will do just enough to cover in this one.