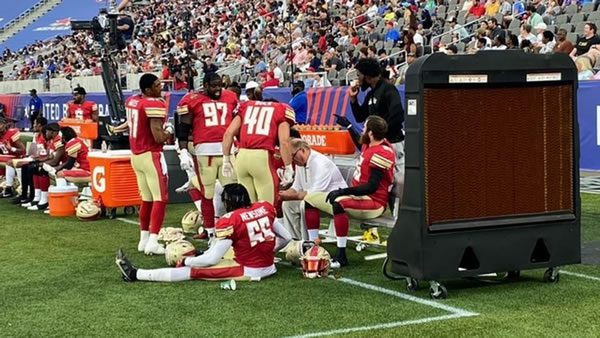 These two teams have been the class of the USFL for most of the season, but there’s a real concern that both the Stallions and the Breakers are leaking oil at the worst possible time. For Birmingham, the Stallions might have kept winning, but that didn’t mean they looked great, as they barely edged Tampa Bay and New Orleans and suffered an upset loss to Houston, never scoring more than 21 points in any of the three games. Birmingham has won with its defense all season long, but the Stallions are now losing home field and appear to be sinking under the weight of expectations as the USFL’s best team since Week 3.
Things aren’t any better with New Orleans, which has had to deal with quarterback problems down the stretch and looked utterly lost trying to move the ball last week against Houston. The Breakers’ defense has been rock-solid all year and kept them in games when they had to play without Kyle Sloter, but the offense has been completely inept for the past three weeks. New Orleans has scored just 29 points over the past three weeks, and even when Sloter is on the field, the offense wasn’t looking all that great. Things aren’t likely to get better against the Stallions, who have held New Orleans to 22 points in two matchups this year. Both of these teams are defense-heavy squads, which says that the total might be off in a big way here.

After last week’s epic failure, Breakers coach Larry Fedora is likely researching every kind of medical treatment he can think of in order to get Sloter on the field. New Orleans trotted out both Shea Patterson and Zach Smith at quarterback, and the results proved a disaster, as the Breakers threw for a mere 64 yards on 23 pass attempts and finished with a pair of interceptions. The run game wasn’t any better, as New Orleans only scratched out 72 yards on the ground in a 20-3 loss to Houston.
Part of that was because the Breakers’ quarterbacks were so poor, but part is because New Orleans’ offense really isn’t getting the job done right now. The Breakers’ strength is its line play, but Birmingham has the ability to match and exceed them there, which has forced New Orleans to go to the air to try to get anything done in two losses to the Stallions. In both meetings, the Breakers had Sloter throw the ball at least 40 times, which came about because New Orleans couldn’t get anything going on the ground against the Birmingham front seven. Johnnie Dixon did snag two touchdowns in the first meeting, but the Stallions played much better defense on him the second time around, a significant factor in holding New Orleans to a mere nine points.

The Stallions know what they need to do to beat the Breakers a third time: win the battle at the line of scrimmage again. Birmingham and New Jersey were the divisional champions for a reason: they’re the only teams in the USFL that can go toe-to-toe with the New Orleans line and be confident that they can win the battle. The Stallions gashed the Breakers’ third-ranked run defense for 5.2 yards per carry back in Week 8, which took much of the pressure off quarterback J’Mar Smith. Smith doesn’t have to win the game through the air, and truth be told, he probably can’t against the Breakers’ top-ranked pass defense.
Instead, Birmingham wants to go on long drives that chew up both yardage and clock before ending with a score. That might mean runs with Bo Scarborough or Smith himself, but either way, look for Birmingham to keep the ball on the ground as much as possible. The Stallions are not a big-play offense, and they do not want to let the Breakers get control of the game. Birmingham is at its best when it doesn’t have to force a pass and can simply focus on denying the big play itself.

These two defenses are the best the USFL has to offer, as they simply don’t give up a ton of points. New Orleans leads the USFL in points allowed at 14.8, while Birmingham is just a shade more generous at 16.1 points per game. The South has been the division of defense, as none of the six divisional matchups in the South over the past three weeks saw more than 39 points scored. Even that game, Birmingham’s 21-18 win over Tampa Bay, wasn’t an offensive shootout; one of the Bandits’ touchdowns came on a punt return of an otherwise forgettable day for Tampa Bay’s offense.
The Stallions struggled to get stops in the first two weeks of the season, but since then, taking Birmingham to hold the opponent under 20 points has been a rock-solid play. The Stallions have held eight consecutive opponents to 18 or less, and only against Philadelphia and Michigan did they break 30 themselves. New Orleans has also been a heavy under team, as only New Jersey and Michigan managed to break 22 points against them. The total of 45 seems incredibly high for a Breakers game; the 31-27 win over Michigan was the only time all year that New Orleans has seen the total exceed 44 points. For the year, the over is 22-18 in the USFL.
The South was home to underdog success because of the rise of the Gamblers, who upset both playoff teams over the final two weeks to get their record to 3-7 in an otherwise forgettable year. Both underdogs covered last week, although Tampa Bay covered by just half a point against Birmingham with the line at -3.5 for the Stallions. For the year, the favorites are 29-11 SU and 21-19 ATS on the year.
Weather Report

The North Division teams have to be looking enviously at the South squads, as they’re going to be suffering in 94-degree temperatures while the South teams get to play in 73-degree weather at night in Canton. Wind will blow six miles per hour to the southeast.

The under appears to be a gift in this one, as New Orleans is showing no indication it can do much of anything on offense against Birmingham. The Stallions look like they’re the better team, but I don’t feel that comfortable backing them, given how both teams are playing right now.
Birmingham has the more stable situation at quarterback, so I’ll take the Stallions and lay the points. However, my main play is the under. Note: College and pro football season are around the corner! Be sure to bookmark our free college football picks and free NFL picks pages as we’ll have more content than ever this season!