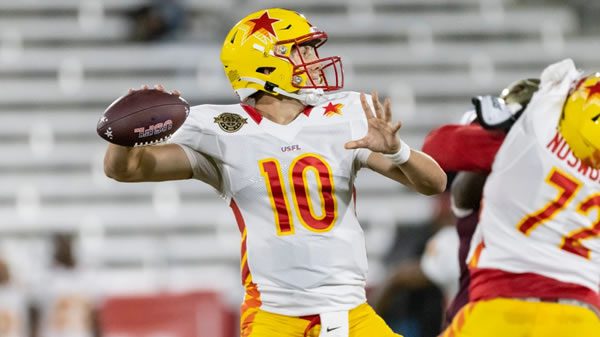 After playing everything close to the chest in the regular-season finale, what’s going to change in this rematch in the playoffs? If the answer isn’t “the battle at the line of scrimmage,” then it’s going to be hard to see Philadelphia turning the tables on New Jersey after losing both meetings to the Generals in the regular season. The Stars were a little better on the ground in Week 10 than they were in Week 3, but that’s partially because the Generals were resting players and didn’t want to tip their hand to Philadelphia before playing again seven days later.

For the Generals, consistency has been the name of the game. Since winning a 10-6 rock fight against Michigan back in Week 2, New Jersey has scored in the 20s every week that it’s played (that game was the only time all year that New Jersey’s score didn’t start with a 2), while keeping most of its opponents in the teens. However, the defense has struggled a bit to stop the pass over the past two weeks, and a fast start by Philadelphia’s offense could give the Generals problems.

However, there are three problems with this strategy for the Stars. First, Case Cookus has been good but not great with moving the ball through the air, completing 62.5 percent of his passes. Philadelphia coach Bart Andrus prefers to move the ball a little at a time through the air while supplementing it with a solid ground game, as opposed to going for the big play. Second, New Jersey might give up some big plays through the air, but that’s in part because the Generals are opportunistic with turnovers in the pass defense, picking off 12 passes (second only to Philadelphia’s 13 interceptions).

Finally, and most importantly, nobody runs on New Jersey. The Generals’ front seven is outstanding against the run, allowing a mere 73 yards per game on the ground. Philadelphia might lead the league in yards per carry at 5.1, but the Generals held the Stars nearly a full yard under their average in two meetings. In Week 3, when both teams were playing their best, the Stars managed a paltry 31 yards on ten carries, securing a 24-16 New Jersey victory.

Nobody runs on New Jersey, but everybody runs on Philadelphia. And that’s a big problem for the Stars because the Generals rank second in yards per carry and lead the league in both rushing yards per game and rushing touchdowns. New Jersey coach Mike Riley has no problem sticking with what works, and back in Week 3, he let the Generals’ ground game destroy the Stars’ front seven for 264 yards on 46 carries. Trey Williams, in particular, took over both games, going for 110 yards in the first meeting and 114 and a score last week.
The Generals spent Week 10 fine-tuning the passing attack, and both Luis Perez and De’Andre Johnson had no problems shredding the Stars when they took to the air. Last week, the Generals had a mere six incompletions between their two quarterbacks while passing for 250 yards and three scores. In short, there doesn’t really appear to be a way for the Stars to stop the Generals based on what the previous two matchups have shown.

If you like offense, the North Division has been the place to find it. The past three weeks have featured nothing but divisional play, and five of the six North Division games have seen at least 45 points scored. The Generals’ consistency on offense has meant they’ve hit the total in four of their final five games, with the lone exception coming against Tampa Bay in Week 7.
Philadelphia’s poor defense has meant the over has been about as close to a sure thing as you can get in the USFL. The Stars have seen at least 47 points in seven of their ten games this season and have gone over 50 points five times, including a 46-24 win over Michigan that set the USFL mark for the highest combined point total of the season. For the year, the over is 22-18.
Last week, New Jersey covered by half a point, marking another differing trend between the divisions. In the North, both favorites both won and covered, while in the South, both underdogs covered, and the Gamblers won the game outright as an underdog. For the year, the favorites are 29-11 SU and 21-19 ATS on the year.

Coming to Ohio was supposed to help the USFL get out of the heat of Birmingham, but that’s not going to be the case for this semifinal. The temperature is expected to hit 89 degrees on Saturday, with the potential for a thunderstorm during the contest. Winds will blow at six miles per hour to the southeast.

The Generals are simply a terrible matchup for the Stars. Philadelphia doesn’t stop the run at all, which is what you need to do to beat New Jersey. The Stars’ biggest strength on offense is running the ball to set up their nickel-and-dime pass attack, which is exactly what you can’t do against New Jersey.
In short, the Generals are the more talented team and play the style that is more suited to win the game between these teams. This seems pretty straightforward; give me New Jersey. Bet your USFL predictions for FREE by taking advantage of a 100% real cash bonus on your first deposit of $100 to $1000 at Betnow Sportsbook when you use bonus code PREDICTEM.