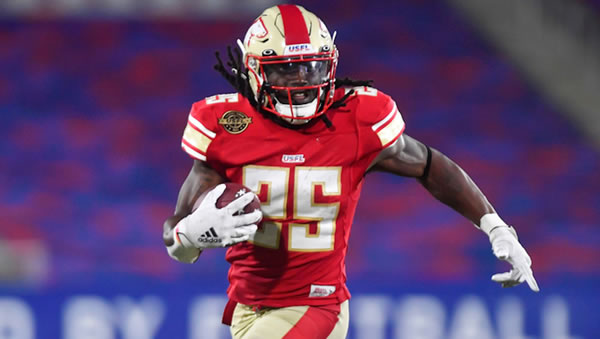 One of these teams was expected to be here, but the other proved a complete surprise. Philadelphia managed to turn the tables on New Jersey by slowing down the Generals’ ground game and getting a big play in special teams when they needed it most, as they’re here because of Maurice Alexander’s punt return touchdown in the dying minutes of the game.

Birmingham played one bad quarter in its semifinal against New Orleans, but the Stallions did what they do best, outscoring the Breakers 10-3 in the second half to finish off the game and suffocate their opponents’ chances. The Stallions have been by far the best second-half team in the USFL and rarely give up more than one score in the game’s final two quarters. That’s exactly what the Stallions did to Philadelphia in the first meeting between these teams, as they outscored the Stars 16-0 in the second half of that game and turned a three-point deficit into a comfortable 13-point victory. Philadelphia has already turned the tables on one opponent; can they do it again and beat Birmingham at its own game?

The Stars weren’t great on offense last time out, but they did just enough to pull out a win against New Jersey thanks to a key special teams play and some good work in forcing turnovers. The offense was Case Cookus and little else last time out, as Cookus proved the leading rusher with 39 yards and a score and threw for 133 yards.

Philadelphia doesn’t really do a lot on offense, but when the Stars play defense as well as they did against the Generals, they really don’t have to do a lot. It’s when the defense lets down that they get in trouble, which happened in the second half in the first meeting against the Stallions. As long as the Stars can keep the offense on the field and killing the clock, they should be able to get away with only scoring about 20 points. Quick strikes aren’t going to be a benefit in this game, so even though the Stars have Diondre Overton available to haul in passes, they likely won’t go deep more than two or three times in this matchup.

Birmingham should be in position to do what New Jersey couldn’t: bleed out the clock by gashing Philadelphia’s run defense. The Stallions did exactly that to New Orleans in the second half, keeping the Breakers’ defense on the field and only allowing New Orleans to touch the ball twice in 29 minutes in the second half. The longer the game goes, the harder it becomes to stop J’Mar Smith, who moves the ball well on the ground when needed and throws accurately to keep the chains moving.

What Birmingham cannot do in this situation is beat itself. The Stars might be prone to getting torn up on the ground, but they make up for it by leading the USFL in takeaways with 22. The Stallions made no mistakes against New Orleans, which is also an opportunistic defense, and they fought Philadelphia to a draw in the turnover battle the first time the teams faced off. The Stallions also rode C.J. Marable for 114 yards and a score in that game, and they’ll have to do that again with the ground game, either via Marable or Bo Scarborough. In this game, the team who has the ball longest will likely win.

Backing the spread in this league is a coin flip, as the favorites have gone 22-20 against the spread for the season and 11-11 ATS since Week 5. Taking the favorite on the moneyline has been much safer, as Philadelphia’s win over New Jersey was only the fourth time in the past six weeks that the underdog actually managed to win the game outright.

The total going above 40 is a good sign for under bettors, as the under is 15-9 when the total is 40 or more at kickoff (and would have been 16-8, had Birmingham not chosen to score a clinching touchdown against New Orleans instead of running the clock dry). This is also a really good time to fade the over, as the public loves to expect points in a championship game. But the majority of title games feature defense, as defense wins championships and offenses are beaten up at the end of a difficult season. This should be similar.

This is truly championship weather for the USFL’s first title game since 1985. The teams will play in 67 degree weather, with winds blowing south at six miles per hour, weather that shouldn’t favor either side.

If you can live bet this game, do so at halftime. Birmingham has that fifth gear that nobody else in the USFL has, and the Stallions have finished off one opponent after another with their closing kick in the fourth quarter. Philadelphia wasn’t supposed to make it here, and I don’t think the Stars have another surprise in them. Birmingham should claim the crown and the cover. Bet your USFL Championship prediction for FREE by taking advantage of a 50% real cash bonus on your first deposit up to $500 at a sportsbook where you can bet on the game live AFTER it starts —> Bovada Sportsbook!