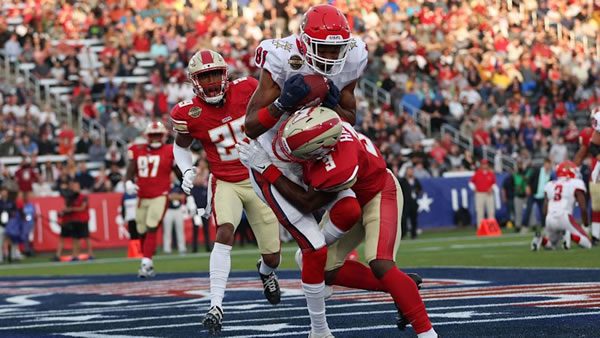 If nothing else, these teams showed enough in Week 1 to suggest that this will be a competitive game, as they both appeared to be on the same page enough to operate their offenses with reasonable efficiency. Both teams will feel like they gave away an opportunity in the opener, as New Jersey lost out to Birmingham in the final minute and Michigan’s comeback fell just short when the Panthers couldn’t successfully execute a fourth down from Houston’s 30. An 0-2 start isn’t disastrous in the North Division, but it would undoubtedly put the loser in a tough spot moving forward.

Based on the first week of the season, Jeff Fisher’s practices this week likely focused on holding on to the football. Thanks to inexperience and sloppy conditions on Sunday, Michigan put the ball on the turf nine times against Houston, losing the ball on two occasions. That included a Shea Patterson fumble in the red zone that the Gamblers turned into six points, a play that proved a back-breaker when the Panthers came up five points short.
The big question for Michigan is who the quarterback is going to be, as both Patterson and Paxton Lynch had their problems against Houston. Patterson proved much better with his decision-making when he held onto the football, but four fumbles by the quarterback is nothing short of disastrous. On the other hand, Stevie Scott and Cameron Scarlett proved to be capable of moving the ball on the ground, as the two combined for 138 rushing yards against Houston. But that might not work all that well against New Jersey’s front seven, as the Generals held Birmingham to a mere 72 yards on 22 carries. Most likely, Michigan is going to have to throw the ball to win.

If the Generals can pound the rock the way they did in the first game of their existence, they’re going to be in great shape. New Jersey dominated on the ground in large part because of De’Andre Johnson, who ended up running for more yards (98) than he threw for (59). While the quarterback was the best option the Generals had on the ground, he wasn’t the only option. Darius Victor and Trey Williams both averaged over four yards per carry, and the Generals ended up with 222 yards on the ground in the loss to Birmingham.
But special teams was a killer for New Jersey, as the Generals missed two field goals that cost them the game against Birmingham. There’s also the question of how aggressive Mike Riley wants to be with his passing attack, which ended up becoming Luis Perez to Randy Satterfield and little else. Satterfield did go for 100 yards in Week 1, but that might be a tougher task against a Michigan pass defense that held Houston to under 100 yards through the air for the entire game. What we do know is that New Jersey shied away from the pass in the second half despite ideal conditions, which says that Riley doesn’t really trust the Generals to throw.

Get Dan’s Total & Point Spread Pick for the Breakers vs. Bandits Week 2 Game >>>

So far, the under has cashed in three out of four USFL games, with the lone exception being the 28-24 game between Birmingham and New Jersey. The North Division is currently 0-4 SU and ATS, as the South teams were all favored by a field goal (except Tampa Bay, which was a six-point favorite by kickoff against Pittsburgh), and all covered that spread.

This should be more like what the USFL expected it would get when it chose to play in April in Birmingham. Temperatures will be in the high 60s at kickoff and fall to a low of 63, with winds of six miles per hour to the southeast during the game.

New Jersey’s ground game nearly led it to a win over Birmingham, but most of that was from one of its two quarterbacks. Michigan seems to have its quarterback question solved as long as it can hold onto the football, and the Panthers should have an easier time of that playing in good conditions as opposed to the slopfest they faced in Week 1. I think the Panthers take a step forward and take advantage of the Generals’ timid approach; I’ll back Michigan and the points.