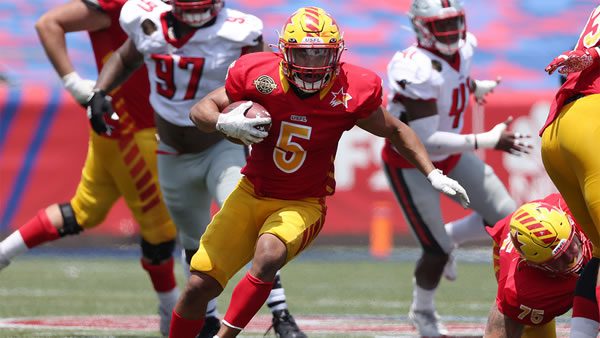 The equation couldn’t be more simple for the Stars: win one more game against anyone on the schedule, and they can begin preparing to play New Jersey in the USFL playoffs. Philadelphia finally appears to have the offense rolling after a few struggles, hitting 35 points in consecutive weeks and riding a two-game win streak for the first time this season. On the other side of the coin, does Michigan approach this game with the enthusiasm it had in the first meeting, a 26-25 loss to the Stars? The Panthers have done an excellent job of staying in games but a terrible job of closing things out. In six defeats, only Birmingham managed to beat Michigan by more than one touchdown. Otherwise, the Panthers have lost by five to Houston, one to Philadelphia, four to New Jersey, seven to Tampa Bay, and four to New Orleans in overtime last week. If Jeff Fisher’s crew is still playing for anything, this should be another tight battle. But if the Panthers have thrown in the towel, the Stars will be in a position to cruise.

If Fisher sticks around for year 2 with the Panthers, his top priority will have to be finding someone who can actually play quarterback. None of his choices at the position have worked out, as No. 1 overall draft choice Shea Patterson was cut after five games, and Paxton Lynch was mostly ineffective before going down with an ankle injury in Week 3. Josh Love has been a bit of an improvement on Patterson, but that isn’t saying much. Love threw no touchdown passes against New Orleans (although that could be because the Breakers signed Patterson and had him feeding them all of their passing plays), forcing the Panthers to go to the ground.

Reggie Corbin answered the bell nicely, and Michigan played a strong game up front in, gaining 192 yards and scoring two rushing touchdowns. Against Philadelphia, the Panthers will almost certainly try to establish the ground game again. Michigan gained 6.9 yards per carry for 250 yards last time against the Stars, who have been basically helpless on defense this season. As long as the Panthers don’t fall behind early or quit on the season, they can move the ball here.

When you have a solid target like Devin Gray, you need the right guy to get him the football. Philly seems to have that now in Case Cookus, who recovered from a horrid showing against Tampa Bay to move the offense well in the fourth quarter against Houston and lead a comeback that saw the Stars score 22 points in the final frame. The Stars were more effective with Diondre Overton on the field, but without him, they are spreading the ball around well, as seven receivers caught passes in the win over Houston.

Philadelphia isn’t trying to put up huge numbers against its foes; it’s trying to bleed the clock and keep its defense off the field. Stars coach Bart Andrus knows that his team’s biggest weakness is its defense, and the less time the Stars do not have the football, the better. Matt Colburn gained 75 yards last time out on the team’s way to 4.9 yards per carry, and the Stars will have to display that commitment to the run again.

The totals were at the extremes last week, as two games (Philadelphia-Houston and New Orleans-Michigan) zoomed past the total, with the other two going under (although Birmingham-Pittsburgh missed the total by a mere point). The over is now 17-11 for the season and has gone 13-3 for the season, with the Stars hitting 26 or more points in three consecutive weeks. Philadelphia has been an over bettor’s dream, as the Stars have had at least 47 points scored in five of seven games and have never failed to combine for at least 40.

The favorites dominated on the scoreboard last week, winning all four games straight up, but Michigan and Pittsburgh both covered last week as underdogs. The favorites are 19-9 SU and 16-12 ATS for the season.

This game will be warm in Birmingham’s heat, as temperatures are expected to hit 89 degrees on Sunday. Wind will blow at seven miles per hour to the southeast, and a lack of humidity should help keep the heat from becoming too awful.

Philadelphia has played virtually no defense this season and has basically had to outscore teams in order to win games. The Stars haven’t held anybody to fewer than 23 points all year, and with Michigan knowing what works and Patterson now unemployed, that should be the Panthers’ baseline point total.

With a 23-point floor, either Philly is going to do its share of the scoring, or Michigan is going to win. I think the Stars will do enough scoring to make this game interesting and likely win it, but I think Michigan can stick close enough to suffer yet another heartbreak. I’ll take the Panthers and the points.