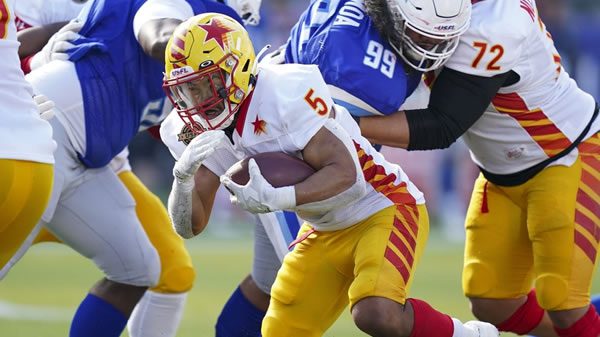 The big question here is whether Houston still believes it’s playing for anything after seeing their playoff chances all but evaporate. Once again, the Gamblers rolled snake eyes on the final play of the game, losing to New Jersey on a quarterback sneak touchdown as time expired. Houston has now lost five straight games, three of which have come on either the final play or the play directly before it. That’s left the Gamblers with a 1-5 record, and that means that with a win by either Tampa Bay or New Orleans, a loss to the Stars would officially eliminate Houston from the USFL playoff picture.

Philadelphia’s also playing for its playoff life, but at the other end of the spectrum. With the Stars leading both Michigan and Pittsburgh, Philadelphia could put itself one win away from locking down a playoff spot with wins by Birmingham and New Orleans (AKA, two of the three strongest teams in the USFL) and a victory over the Gamblers. The Stars took a big step toward the postseason when they forced three Tampa Bay turnovers to upend the Bandits, despite getting shredded in the secondary for 333 yards and four scores. That could be good news for the Gamblers, as quarterback Clayton Thorson leads the USFL in passing touchdowns…but he also leads the USFL in interceptions, and the Stars’ defense leads the league in interceptions.

There’s no sugarcoating this: the Stars’ passing attack was dreadful against Tampa Bay, as Case Cookus threw for a mere 73 yards on 11 completions against the Bandits and only two passes went longer than 10 yards. But it didn’t matter because Matt Colburn II shredded Tampa Bay’s run defense for 140 yards and three touchdowns and the defense did the rest by winning the turnover battle.

That might be the way the Stars have to win this matchup as well, given that the Gamblers’ opportunistic style of defense lends itself to a lot of yardage as well as several turnovers. Houston thrives on forcing its foes into mistakes, as the Gamblers’ 14 takeaways are tops in the USFL. But no team gives up more passing yards per game than Houston’s 238, and the only run defense worse than the Gamblers’ unit is Philadelphia itself.

After having to watch New Jersey bleed out the clock for much of the contest, the Gamblers should be thrilled to actually get the chance to run their offense in this game. Houston ran a mere 38 plays in the contest and didn’t touch the ball in the third quarter, compared to 39 running plays and 68 total plays for the Generals.

The good news for the Gamblers is that when they did have the ball, they were fairly effective. Houston never had a drive last more than five minutes, but the Gamblers did score three offensive touchdowns and saw Clayton Thorson throw just three incompletions for the contest. However, Thorson also tossed a key interception that allowed New Jersey to flip the field, forcing the Gamblers to chase the game in the second half. Thorson should be able to move the ball on Philadelphia’s weak pass defense, but the Stars’ one strength in the secondary is their league-leading eight interceptions, which could be a problem given Thorson’s problems turning the ball over.

The strategy of betting the under blindly worked in the early going, but the over has now gone 8-0 in the past two weeks of USFL action. Last week, only one game out of four went under 50 points, and that game involved Pittsburgh’s woeful offense. The over is now 15-9 for the year and has gone 11-1 over the past three weeks, which makes this an ideal time to bet the over if Vegas hasn’t figured it out yet.

The favorites aren’t as separated as expected at this time of the season, as they went 3-1 SU and 2-2 ATS last week. That’s fit well with the teams to this point in the season, as favorites are now 17-7 SU and 14-10 ATS on the year. Houston has really skewed that rating, though, as the Gamblers keep coming close but losing, giving them ATS wins as their record slides further from the postseason picture.

This is going to be a hot one in Birmingham, as temperatures are expected to hit 88 degrees on Sunday. Wind will blow at eight miles per hour toward the west, which won’t provide much relief for the players.

Eventually, Houston is going to run out of steam as it starts to play for nothing but pride. The Gamblers basically have to run the table to have any chance at making the playoffs, and odds are that there’s little to no chance of that happening.

Philadelphia was able to move the ball on the ground against Tampa Bay, and the Stars are well aware that their best chance to win the game is to keep Houston’s offense on the sidelines. I expect there will be points and expect the over to cash, and for the main play, I’ll take Philadelphia to score the cover here. Note: It’s a great day to take five minutes to save yourself thousands of dollars in wasted risk by making the switch to -105 odds at BetAnySports Sportsbook! Make the switch! You’ll be so glad you did!