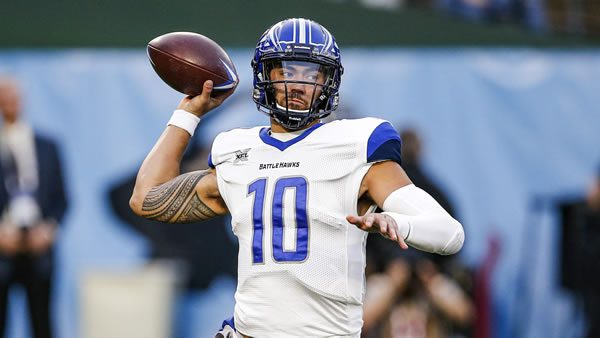 Todd Haley is far from the only former NFL coach in the USFL, but he’s certainly the one who’s placed the highest premium on NFL experience, as the Bandits have 29 out of 38 players who have attended an NFL training camp. Whether that’s going to pay off in the early going is questionable, however, as Tampa Bay appears to have placed a high priority on throwing the football while virtually ignoring the ground game. And that could be a real problem in this opening matchup, as Pittsburgh has taken the exact opposite approach. The Maulers have created a roster that lives up to their name, as former NFL running backs coach Kirby Wilson has built his team to try to win the battle in the trenches while placing far less of a premium on the passing game. The Maulers opted to focus on experience in the trenches while going for speed in the backfield. There’s not a lot of experience on this roster, but the type of team Pittsburgh has built could give them an edge if Wilson can adjust to being a head coach for the first time.

Haley went hard for experience with his quarterback selection, as Jordan Ta’amu has been here before with the XFL. Ta’amu was the signal-caller for the St. Louis BattleHawks and threw for 1,050 yards before COVID concerns shut down the league in 2020, and if not for current Carolina Panthers quarterback P.J. Walker sucking up all the attention while leading Houston, Ta’amu might have found his way to the NFL level in training camp.

For his receivers, the Bandits placed a heavy emphasis on familiarity with Haley and his system, as they opted for former NFL receivers Eli Rogers and Derrick Willes as their top pass-catching options. Tampa Bay also placed a significant focus on pass-blocking linemen and backs, as Haley appears to be putting most of his chips on Ta’amu and his connection with his wideouts. In fact, Ta’amu might very well be his team’s top runner when all is said and done, as he ran for 217 yards for the BattleHawks and ranked seventh in the XFL in rushing among all players.

The Maulers are, again, the exact opposite of the Bandits. Their quarterback is Kyle Lauletta, who did manage to throw five passes in live NFL action for the Giants in 2018. Unfortunately, none of those were completed to his own team (he tossed one interception to Washington), which led to his release before his second NFL season. Lauletta did read defenses well at a lower level with Richmond, but arm strength has never been one of his pluses. Fortunately, the Maulers probably won’t ask him to go for the deep ball very often.

Instead, they’re likely to lean hard on De’Veon Smith, who was the XFL’s leading rusher with the Tampa Bay Vipers in 2020. Smith is an old-school running back who will run through tacklers rather than around them, which could bode well against the Bandits’ questionable front seven. The Maulers do have some speed at wide receiver in former Patriot Jeff Thomas, which could lead to a few short passes to take advantage of Lauletta’s limited arm strength and their receivers’ ability to make defenders miss.

The weather is not likely to get better over the course of the day, as up to a quarter of an inch of rain is possible, and wind gusts of 10 miles per hour will be in the forecast on a 62-degree evening in Birmingham.

The Bandits might have the talent edge, but this seems to be the wrong kind of matchup for them, especially in this kind of weather. With the rain likely to come throughout the contest and the Maulers perfectly content to run the ball throughout the game, this could be a situation where the Bandits can’t get their offense on the field.

I think the Maulers can keep the clock running for most of the game, which should lead to a reasonably low-scoring Week 1 tussle. I’ll take Pittsburgh and the points in this one.