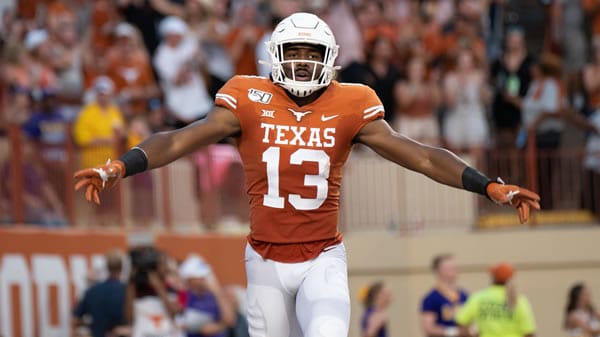 Former conference rivals renew acquaintances when the Texas Longhorns butt heads with the Colorado Buffaloes in the Alamo Bowl Tuesday night in San Antonio. Texas is coming off a disappointing regular season, one that didn’t include a trip to the Big 12 championship game. In contrast, Colorado, in its first season under another new coach, exceeded expectations. The Longhorns opened as nearly two-touchdown favorites for this bowl, but that line got bet down rather quickly. How are we playing this one with our free college football bowl betting pick?

College football bowl betting odds opened Texas at -12 over Colorado, with an over/under of 64.5. Early betting action then dropped that spread two and a half points, to -9.5, and dipped that total to 64.

According to Sagarin’s ratings at USATODAY.com, the Longhorns should be favored by 13 points for this game.

Texas fully expected to contend for a berth in the Big 12 championship game this season and started 2-0. But the Longhorns then lost back-to-back games to TCU and Oklahoma by scores of 33-31 and 53-45 in overtime. Three straight wins, including an overtime decision at Oklahoma State, kept Texas in the running but a 23-20 loss to Iowa State knocked them out. The ‘Horns then finished with a 69-31 rout of Kansas State back on Dec. 5.

Texas had a final scheduled game against Kansas canceled.

The Longhorns hit the 50-point mark four times this season and the 60-point mark twice. They also out-gained and out-rushed four of their last five opponents, going 4-1 along the way.

So Texas finished 6-3 playing against what Sagarin’s ratings at USAToday.com call the 43rd-toughest schedule in college football this season.

On the other hand, Colorado was expected to finish at or near the bottom of the Pac-12 pecking order this season. Instead, the Buffaloes, albeit vs. a limited schedule, surprised almost everybody by winning their first four games. Colorado opened with an upset of UCLA, then upset Stanford, then beat San Diego State and Arizona. The Buffs then finally suffered their first loss back on Dec. 12, at home to Utah 38-21, then had a final scheduled game against Oregon canceled.

Colorado won both ways this season, beating the Bruins and Cardinal in shoot-outs, then allowing a total of just 23 points in beating the Aztecs and Wildcats.

The Buffaloes led the Utes last time out 21-10 early in the third quarter but gave up the last 28 points of the game and missed ATS as three-point dogs.

Colorado also out-gained and out-rushed every opponent this season except Utah.

So the Buffs finished 4-1 playing against Sagarin’s 51st-toughest schedule.

Sagarin ranks the Big 12 as the No. 2 conference in college football this season, with the Pac-12 South, Colorado’s home, coming in at No. 4.

Overs are 6-3 in Longhorns games this season, which are averaging a healthy 70 total points.

Overs are 3-2 in Buffaloes games this season, which are averaging 57 points.

Texas is just the better team here, more explosive on offense, with the better run defense. The Longhorns finished well this season, winning four of their last five games, and they should have won the game they lost. Also, the Big 12 owns the upper hand in bowl match-ups against the Pac-12. Plus, the line moved in our favor. We’re taking Texas here, minus the points. Kick your New Year off SMART by making the switch to an online sportsbook where you only have to lay -105 odds on sides and totals! —> BAS Sportsbook!