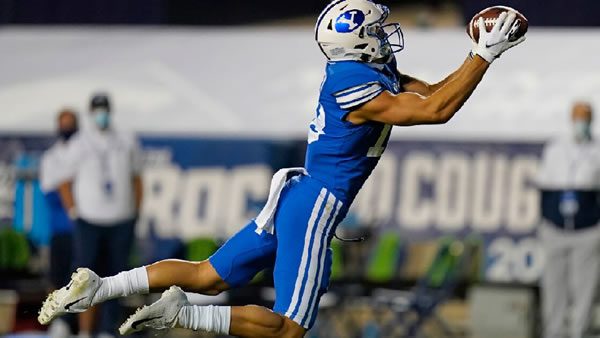 The BYU Cougars and the Arizona Wildcats will duke it out in Allegiant Stadium in Las Vegas in a week one matchup. For the Cougars, last year was big with an 11-win campaign. They ran over a lot of teams and flexed enormous offensive chops for much of the season. In what was a tough season to find your bearings, BYU almost ran the table. For Arizona, slugging it out in the Pac-12, it was a rough truncated season at 0-5. After losing 70-7 to in-state rival Arizona State, Kevin Sumlin got his walking papers, with veteran positions coach Jedd Fisch getting the nod at head coach. Who can get their season started in the right direction?

For BYU, the playing field has changed. First and foremost is a schedule that makes last season look like a cakewalk. And let’s face it, there were some easy touches on last season’s schedule, with last-minute replacements leading to a slew of lower-end opposition. Not to mention star QB Zach Wilson is off as a high draft pick to the Jets. Top aerial threat Dax Milne is also gone, as is the bulk of the line that allowed Wilson to rack up such eye-popping stats. So with the heightened context of the opponent and a big chunk of their talent departing, a wait-and-see approach might be required with an offense where a lot of inexperienced players will be in key roles.

One should hesitate in writing them off, however. AS OF PRESS TIME, the QB position remains a mystery, with Jaren Hall and Baylor Romney holding off freshman Jacob Conover for the starting gig. Another Romney returns in receiver Gunner, a deep threat who is due to really start making a consistent impact. And if one assumes the line has enough depth to keep things in working order, Tyler Allgeier is a proven contributor coming off a season where he ran for 1130 yards and 13 TDs.

Can Arizona Bounce Back?

It’s really going to be a new look for the Wildcats, led by first-time head coach Fisch, with the offense in the hands of coordinator Brendan Carroll (son of Pete). Last season began promisingly enough, as the Wildcats pushed the Trojans to their absolute limits, but in a season of uncertainty and canceled games, they melted away at the end of the year. While the arrival and Fisch and his offensive acumen offer promise, there are issues. And getting those worked out in Vegas against BYU isn’t an ideal spot.

Like BYU, they have an ongoing QB battle, and while a star could emerge from that pack, whoever it is will be an inexperienced guy trying to implement a new system. And he will be doing so with a cast that is also steeped in newness. Their best ball-catchers have either transferred or are out. There are areas of promise, but again, no proven contributors. Throw in a line that has one lone proven commodity, and it’s not easy to imagine Fisch’s philosophies taking hold right away.

Perhaps if Arizona has to play the Cougars with an unsettled offense with so many new faces, at least it’s not last season’s BYU defense. Allowing fewer points per game than all but three teams in the FBS, they were super-stout, but alas, there were departures. And there was a lot, with 7 of their top 10 tacklers needing to be replaced. They still cultivated enough depth where they shouldn’t fall off a cliff, though a step back could be forecasted. It’s just that after doing so well last season, there is an inertia that could carry them through to this season. But even a vastly unproven offense like Arizona’s could be a challenge for a “D” that saw some pretty flat offenses last season.

There are still enough weapons on the BYU offense to warrant concern for the Wildcats. They have said that the “D” will be a big deal, and getting defensive coordinator Don Brown from Michigan would speak towards that. The problem is that he inherits a unit that is devoid of real difference-makers. Some pieces could surprise, perhaps along the front where they have some bulk, but like the whole team, this is a work in progress. With BYU not what they were last season, they will be in better shape than they would been have last season, but how serviceable can this “D” be expected to be right out of the gate?

Some may be entranced by BYU’s 11-win season. You see Arizona coming off a winless campaign that resulted in a coach getting canned. But when you consider who BYU beat, where they played, and who they had then who they don’t have now—you can start to see how it’s important not overly to project. This one is in the bright lights of Vegas, against a Pac-12 school with Pac-12 talent, with a BYU school facing uncertainty across key areas.

Arizona, especially a revamped Wildcats team, isn’t easy to get behind with the betting dollar at this point, especially with the last impression BYU made on us. I see this game being a grind for both sides, as each team just tries to get personnel up to game speed. There are youngsters on each side who are even more rusty than normal, some having not even played last season amidst all the drama. I just don’t see a game where either team really takes off, making that double-digit spread seem a bit lofty. I’ll take the points.

Loot’s Pick to Cover the Point Spread: I’m betting on the Arizona Wildcats plus 11 points. Wanna bet this game for FREE? Simply deposit $25 and you’ll receive an extra $50 when you enter promo code ROOKIE200 right after you deposit at Intertops Sporstsbook!