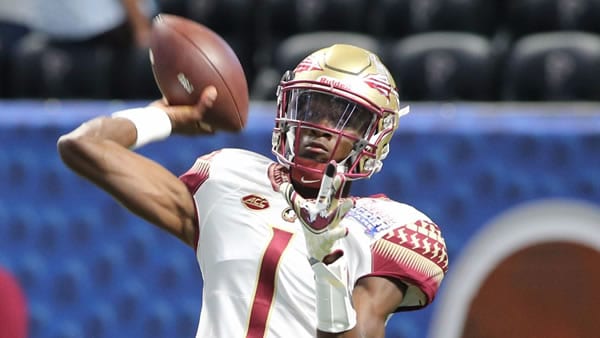 This situation really couldn’t look much worse for the Seminoles, as not only are they coming off a meltdown against a mediocre Georgia Tech team, but they’re also going to Miami without their coach. Mike Norvell won’t travel to South Florida after testing positive for COVID, and the Seminoles didn’t get a chance to take any frustrations out on Samford after that game was postponed. Instead of a weak Bulldogs squad, the Seminoles instead get a road trip to a Miami team that looked very good in humbling Louisville on the road.

But Miami has been a bit of a maddening team to bet on at home, as the Hurricanes have only managed to cover in three of their past six home games. They’ve also struggled badly against Florida State in Miami, as the Canes have lost four of their past five home meetings with the Seminoles. But all four of those losses came with Jimbo Fisher on the other sideline, and Florida State’s now on its fourth coach since Fisher in 2016 with Norvell sidelined for this week. Can the Seminoles turn their situation into an opportunity, or will Miami continue its long-term climb back?

How the Public is Betting the Florida State/Miami Game

The number has moved a point and a half toward Miami, jumping from 10 points to 11.5 since it went on the board. The total hasn’t changed much, as it’s dropped from 57 to 56.5.

Florida State:
Wide receiver D.J. Matthews missed the loss to Georgia Tech with a positive COVID test and is questionable. Offensive lineman Darius Washington injured his left foot against Georgia Tech and is questionable. Defensive end Joshua Kaindoh (leg) and defensive back Meiko Dotson (undisclosed) are both out for Saturday, while quarterback Chubba Purdy (collarbone) is out until late October, and tight end Jordan Wilson (leg) is out for the season.

Florida State’s passing attack left a lot to be desired against Georgia Tech, as the Seminoles couldn’t get out of their own way after the game’s first two drives. The Seminoles had absolutely no problems moving the ball on their first two possessions, scoring 10 points right away and seemingly setting themselves up to bury the Yellow Jackets, but after that, Florida State went three and out on two of its next three possessions. The only reason it wasn’t three was because the Seminoles tossed an interception on third down on the other possession, ending that drive before it could get started.

The main problems for the Seminoles were that James Blackman wasn’t accurate, and when he was, he didn’t get much out of his throws. Blackman threw for just 198 yards and 20 incompletions out of 43, gaining only 4.6 yards per catch. The Florida State ground game didn’t do much either, averaging just 3.1 yards per carry. Obviously, you’ve got to be able to get something done on offense if you’re going to compete with an attack like Miami’s, and Florida State has had two weeks to get itself right. But if that hasn’t helped, this could be one-way traffic.

Miami shouldn’t have beaten Louisville. However, it wasn’t the fault of the Hurricanes’ offense because they piled up 485 yards in just 22 minutes of possession. Most importantly, unlike the Cardinals, the Hurricanes didn’t beat themselves. While the turnover chain came out three times for the Miami defense, the Hurricanes didn’t cough up the ball once and didn’t even need their punter in the second half, turning their six drives into three touchdowns, two field goals, and the end of the game.

Miami won the game because the offense didn’t beat itself and hit some big plays when the chances came. The Hurricanes were able to score on the first play after two Louisville scores, which broke the Cardinals’ backs and kept them playing catch-up. Miami didn’t have the ball often, but when it did, D’Eriq King was sharp, hitting 18 of 30 passes and averaging a first down with every catch. This is an experienced, disciplined offense that can beat you on the ground or through the air, and most importantly, the Canes don’t give away possessions.

Miami at home is not really a betting situation that we’ve wanted for the past few games. The Canes are a mere 7-6 at home ATS over the past two-plus seasons, and they’ve often found a way to lose the game straight up. Plus, this is a series where you don’t want the home team or the favorite. Over the past 18 years, the favorite has covered exactly three times, and the road team has covered in 12 of the last 14 meetings. As you might expect with those numbers, both teams are 6-1 ATS in the other’s stadium over the past 14 years.

Those numbers strongly favor the Seminoles, but before you go place a large wager on Florida State, keep in mind that the Seminoles have also been a terrible cover team as of late. Florida State has covered once in their past seven road games and has gone 0-4 ATS in their past four contests dating back to last season. The Noles have also been rather atrocious in September, covering three of their past 13 games in the season’s first month.

Finally, these teams know each other so well that they don’t actually put up a ton of points against each other. The last time that either cracked 40 points against the other were 2013 and that was the Seminoles’ national championship season. Even then, Miami’s offense never got started, and the teams only combined for 55 points. The projected total of 56.5 points would be the largest point total in this rivalry since 2010 when the Seminoles enjoyed a 45-17 rout of the Hurricanes. In every game since then, 30 points have been enough to be a winning score.

Thunderstorms are in the forecast for Saturday (big shock for September in South Florida), but the hope is that the late kickoff will push this game past the window of the worst of the weather. Temperatures could be as high as 90 degrees.

Miami looked a little too good last week, and Florida State probably isn’t as bad as it looked against Georgia Tech. The Seminoles should be plenty embarrassed by the way they played in their opener, and there’s likely the motivation factor of trying to win one for their new coach.

I don’t think the Seminoles will get the victory here, but I think this line’s climbed a little too high. I’d grab the under right now before it starts to come down, but I think the public is suckering themselves into Miami a little too hard at the moment. I’d wait to bet this line in hopes of getting an extra point or two, but I want the Seminoles and the points. This would be a GREAT game to throw into a teaser. Did you that you can bet teasers and move the line up to 20 points at BetAnySports?