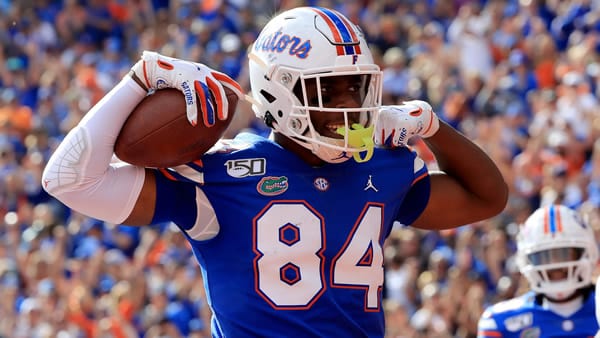 What a wild week it was in the SEC last weekend. Just when you thought LSU’s rebuilding campaign had moved on from their season-opening upset loss, the Tigers dropped their 2nd game of the season to a winless Missouri team as two-touchdown favorites marking the first time a defending National Champion dropped 2 of their first three games. Meanwhile, while that upset was transpiring on the Bayou, the 4th ranked Florida Gators suffered another stunning upset loss at the hands of Texas A&M thanks to a 26-yard field goal from Aggies’ kicker Seth Small as time expired.

Now two teams that had conference championship aspirations must refocus and recalibrate their season goals, and it starts this week when the now 10th ranked Gators host the LSU Tigers at Ben Hill Griffin Stadium. For the Tigers, it will be the first game since the 2018 Alabama game that LSU is two-touchdown underdogs, and it is safe to say things have unraveled for the defending National Champions. Can LSU find the strength to turn things around in the face of adversity, or will Florida rebound to solidify their stance as one of the best teams in the SEC?

After giving up 44 points in the opener against Mississippi State, LSU silenced critics in their rebound shellacking over Vanderbilt 41-7. However, it became clear last week that the Tigers’ defensive issues were not going away any time soon. The Tigers allowed a mediocre Missouri offense to compile 586 total yards, including giving up 404 yards through the air to freshman quarterback Connor Bazelak. After losing several NFL caliber talents in the secondary, LSU has not found many answers in replacements to help revamp the pass defense. In fact, the Tigers are currently the 2nd worst pass defense in college football, allowing 380 yards per game through the air. The only team that has been worse is Memphis, who has allowed 386 passing yards on average through 2 games.

Of course, these defensive struggles will be tested again on Saturday against a pretty solid Florida offense led by quarterback Kyle Trask. The Gators senior quarterback is the perfect specimen to capitalize on LSU’s pass defensive woes. Trask is a high percentage passer that can make all the throws to stretch the field. On the season, Trask has completed 71% of his passes resulting in 14 touchdowns and just one interception. Expect college football’s best TE Kyle Pitts and WR Kadarius Toney to be targeted early and often. Both standouts present mismatches for LSU’s defense, and we should expect the savvy play calling of Head Coach Dan Mullen to target LSU’s secondary in an aggressive fashion.

The key to LSU’s chances to contend in this game outright and against the spread will come down to the offense’s ability to produce points. Despite losing QB Joe Burrow, RB Clyde Edwards-Helaire, and enormous talent at the skill positions, the Tigers offense is still pretty good. Quarterback Myles Brennan has been decent with 1,112 yards with 11 touchdowns and three picks through three games. Junior WR Terrace Marshall has done his best to fill the void left by Ja’Marr Chase and Justin Jefferson. Marshall has 21 catches for 424 yards with seven touchdowns through just three games, which leads the SEC. LSU’s efficient passing attack will have the opportunity to thrive again this week in an advantageous match-up. The Gators have struggled to defend the pass and have allowed point totals of 35, 24, and 41 against some relatively mediocre offenses. Therefore, LSU’s offense will have the opportunity to compete, and they will have to perform well judging by the play of their defense.

Jay’s Pick to Cover the Point Spread: I’m not convinced that either defense can stop the opposing offense in this game, and the total reflects that thought. As a result, I think LSU can stay in this game, barring another complete defensive meltdown. The best value in this game will be taking the points. Take LSU +14. Bet your Week 6 NCAA football picks FREE by depositing $200, and you’ll receive an extra $200 from MyBookie!