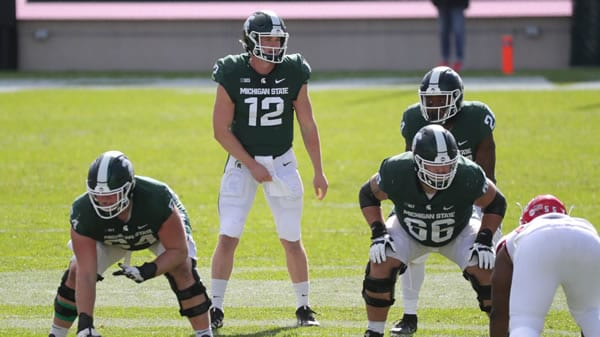 The Michigan State Spartans just pulled a big upset over a hated rival last week and now hope to avoid a letdown when they take on the 0-2 Iowa Hawkeyes Saturday afternoon at Kinnick Stadium. MSU is headed into its third game under Coach Tucker, while Iowa is going into its 269th game under Coach Ferentz. The Hawkeyes are favored by a shade under a magic number; who do we like here for our free college football pick?

College football betting odds opened Iowa at -7 over MSU, with an over/under of right around 48. Early betting action then dipped the Hawkeyes to -6.5 and the total to 46.5.

Michigan State is 1-1 on the season after upsetting rival Michigan at the Big House last week 27-24. As 21-point underdogs, the Spartans drove their second possession of the game 71 yards to a touchdown and never trailed from there. MSU led 14-10 at the half, let the Wolverines tie the score at 17-17 midway through the third quarter, then scored the next 10 points to take a two-score lead and hung on from there for its first victory under new head coach Mel Tucker.

In the process, the Spartans provided bettors who backed them on the money line – whoever the hell they were - a nice, fat payout of +990.

On the day Michigan State got out-gained by the Wolverines 452-449 and lost time of possession by a 34:26 split. But the Spartans came up with a bunch of big plays offensively while committing nary a turnover, which was a welcome reversal from their season opener against Rutgers.

MSU lost that season opener two weeks ago to the Scarlet Knights, a team that had lost 21 Big Ten games in a row, 38-27. Michigan State out-gained Rutgers that day by 93 yards but turned the ball over a ridiculous seven times, leading directly to three Knights touchdowns.

Iowa, meanwhile, is 0-2 for the first time since 2000, after falling at home to Northwestern last week 21-20. The Hawkeyes turned two early Wildcats turnovers into touchdowns, led 17-0 after one quarter and 20-14 at the half. But Iowa fell down by a point midway through the third quarter and came up completely empty from there, throwing two interceptions and getting stopped on downs on its final three possessions, to lose to Northwestern for the fourth time in the last five meetings.

For some reason, Iowa threw the ball 51 times last week, with three interceptions, and only ran the ball 23 times. Which doesn’t exactly sound like Iowa football.

Iowa opened this season two weeks ago with a 24-20 loss at Purdue. The Hawkeyes led that game 20-14 in the fourth quarter but gave up the last 10 points, the last seven following an Iowa turnover, to lose outright as three-point favorites.

On the injury front, Michigan State is really banged up along the offensive line.

Michigan State owns a three-game winning streak in the series against Iowa, going 2-0-1 ATS along the way. But these teams haven’t met since 2017, a 17-10 Spartans victory.

Michigan State’s loss to Rutgers two weeks ago easily played over a total of 44.5, while last week’s win over Michigan stayed under a total of 52 by one point.

Unders are 6-2 over the last eight meetings between these two teams, which have trended very low-scoring.

Iowa’s lost two close games this season, but we believe it’s still the better team in this match-up. A little more balance on offense might help, which might help cut down the turnovers. Michigan State, meanwhile, is a team that lost to Rutgers convincingly but is now coming off a massive effort last week against Michigan. We smell letdown. We’re getting down early before the line pops back up on the Hawkeyes.

Did you know… that we offer free weekly computer generated predictions?