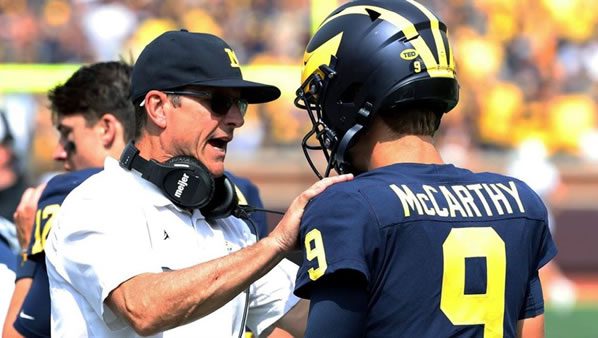 Where: Memorial Stadium – Bloomington, IN

The Big Ten East will almost certainly come down to the Michigan-Ohio State clash later in the season, but we have a lot of games before that, and the Wolverines are going to get everyone’s best shot. Michigan has owned this series, winning 60-of-70 all-time matchups against Indiana, but the Hoosiers have kept things close in Bloomington over the last few years and took down the Wolverines by a 38-21 score in 2020. This will be a tough game for Indiana’s 99th-ranked scoring defense, with Michigan averaging 45.4 points per game. The Hoosiers do have a puncher’s chance with a passing offense that is averaging nearly 280 yards per game, but they may be without a couple of playmakers as Cam Camper, and D.J. Matthews are both questionable for Saturday.

These teams are riding some strong betting trends into this weekend, and they occupy exact opposite positions in some key predicting categories. Michigan is 4-0 against the spread in their last four road games, while Indiana is just 1-7 ATS in the last eight at home. Michigan is 6-1 ATS in the last seven when playing a Big Ten foe, but Indiana is 1-5 ATS in their last six conference games. In broader terms, Michigan is 14-5 against the spread in the last nineteen games overall, with Indiana sporting a 3-15 ATS record in their last eighteen overall. The only thing going for the Hoosiers is that they have a 3-1-1 ATS record against Michigan in the last five at Memorial Stadium, just about every other trend is heavily in the Wolverine’s favor. Roughly 70% of the public money is on Michigan in the early betting, with 52% of bets coming in on the Over. The Over has hit in eight of the last ten when Michigan plays on the road and 5-2 in the last seven Indiana games overall.

There is a lot to settle before we start talking about the CFP, but the 4th ranked Wolverines appear to be on a mission to be in that conversation. They dropped 55 points per game while breezing through their first three games, and their only “scare” was a 34-27 win against Maryland, where they gave up a late touchdown and two-point conversion to the Terps. It has been a clinic on both sides of the ball, with the Wolverines ranked 7th in scoring and 6th in points allowed. Blake Corum leads the NCAA with ten rushing touchdowns, and he leads the teams with 611 rushing yards while averaging 6.6 yards per tote. J.J. McCarthy is completing 78% of his passes and has yet to throw an interception while recording six passing touchdowns. Ronnie Bell is the preferred target, he leads the team with 19 catches for 269 yards, but Roman Wilson is not far off those totals and leads with three receiving scores. That receiving duo is likely more dynamic than they have shown thus far, but some of that is simply due to Michigan’s 13th-ranked rushing offense. The Wolverines have already compiled 19 rushing touchdowns in just five games. The defense is 8th against the pass, 14th against the run, and 6th in total yards allowed. They have only generated three turnovers thus far, but they have 14 sacks, led by Mike Morris, who has four.

The Hoosier’s season has been a bit of a roller-coaster, and the next few weeks are going to give a good indication of either just how far they have come or just how far they have yet to go. Indiana jumped out to a 3-0 start but has lost the last two to Cincinnati and Nebraska, with the defense allowing 40 points per game in those games. The Hoosiers battled to a 21-21 tie in Lincoln before unraveling late in part due to 11 penalties and being nearly ten minutes behind in time of possession. Indiana will have to play a full four quarters of good football to hang on Saturday, but self-inflicted wounds will have this one over quickly. Connor Bazelak’s 1,394 passing yards are good for 3rd in the Big Ten despite a 52% completion percentage, and he has hit seven different receivers for touchdowns. Seven Hoosiers enter the week with at least nine catches, including Cam Camper (33-418-1) and D.J. Matthews Jr. (17-198-2), who are the best of a deep bunch. Shaun Shivers isn’t a homerun threat at 4.4 yards per carry, but he has four rushing scores and is alive in the receiving game as well. The defense is 118th against the pass and allowing 30.4 points per game, but they are prone to making the big play with thirteen sacks, four interceptions, and seven forced fumbles.

Take the Hoosiers at Home

Michigan appears to be the real deal, and their offense is going to prove to be too much behind McCarthy and Corum for Indiana to threaten the upset, but the Hoosiers have enough playmakers to get some points on the board, and the three-plus score betting line is going to be a tough one for Michigan to overcome. Michigan hasn’t been good at generating turnovers, so you can’t count on short fields and quick scores, which benefits the Hoosier’s chances at covering here. Michigan doesn’t need style points, so this is another work-like effort for them, as we have seen in the last two weeks against Maryland and Iowa. They will get an early 7-10 point lead and extend that through the early second half, but Indiana gets three scores, including one in the final frame that gets them a close cover, with Michigan winning by a 41-21 margin.

Pick to Cover the Spread: Indiana Hoosiers. Bet your Week 6 college football predictions for FREE by scoring a 100% REAL CASH bonus when you enter promo code PREDICTEM at Betnow Sportsbook!