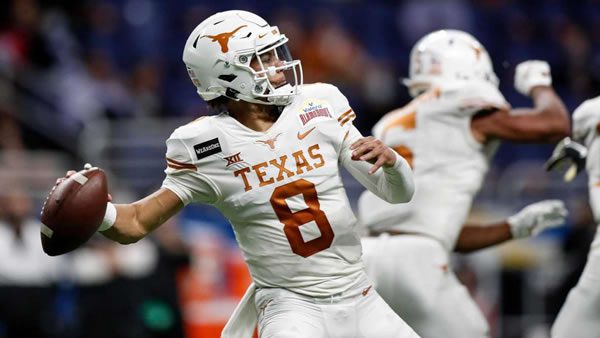 It’s state fair time in Texas, and the Longhorns face a chance to prove that they’re really back against an Oklahoma team that’s disappointed all season long. The Sooners might be 5-0, but they’ve won four of their games by seven points or less, and they haven’t exactly faced a murderer’s row of opponents. So far, their best win is either surviving West Virginia at home or going to Kansas State and finally solving the Wildcats…who were down their starting quarterback.
On the other hand, Texas was the butt of jokes after losing to Arkansas, but the Razorbacks might be a lot better than people expected them to be. Arkansas’ only loss is to Georgia, which might be on another level entirely from the rest of the country. Otherwise, Texas has done what it’s needed to do, embarrassing Texas Tech, besting TCU on the road, and handling a good mid-major in Louisiana.

But until the Longhorns can beat Oklahoma — something they’ve done just twice in their past eight trips up Interstate 35 — they’re going to hear every jab about how this is a program that thinks it’s a lot bigger than it is. Beating the Sooners would go a long way toward proving Texas is really back.

How the Public is Betting the Oklahoma/Texas Game

The sharps still believe in the Sooners, but the public is sour on them. So far, 67 percent of tickets have come in on Texas. That’s not been enough to move the spread or the total, both of which have held firm at +3.5 and 63.5.

The good news is that Spencer Rattler is getting better with his decision-making. The bad news is the Sooners just are not as explosive as they were a season ago. Oklahoma has appeared stuck in neutral all season, coming out with highly unimpressive victories against Kansas State, West Virginia, and Nebraska over the past three games. One of the main reasons the Sooners just aren’t that explosive is that they’ve been a bit too one-dimensional against good teams, relying too much on Rattler and not enough on the ground game.

Kennedy Brooks is a capable back, but Oklahoma didn’t use him effectively against West Virginia, in part because it never figured out the Mountaineers’ defense. Things got a little better against Kansas State, but that was in part because they had to be because the defense couldn’t get stops. The Sooners have been an elite offense and can be again, but that takes the right game plan, and so far, Oklahoma hasn’t had it.

Texas knows exactly who it is, as Plan A is to use Bijan Robinson to pound the rock and let the rest of the details take care of themselves. When he’s able to find holes, and the Texas line controls the line of scrimmage, that plan works to perfection. When he runs into a tough run defense, that plan is in peril. Arkansas showed just how much Texas needs the ground game to be successful, as Robinson only managed 3.6 yards per carry against the Razorbacks, and the Longhorns never got going in that contest.

That’s a concern because Oklahoma has a top-line run defense waiting for the Longhorns. The Sooners aren’t Georgia-esque, but they’re at least as good at stopping the run as Arkansas, which will require Texas to put the ball in Casey Thompson’s hands. So far, Thompson has done an adequate job of moving the offense, but this is still a run-first team that will have to adjust to who it needs to be in this game.

Don’t be fooled by last year’s 98 points between the teams. That game comes with an asterisk because the teams played four overtimes and scored a combined 36 points in the extra session. Of the past nine meetings between the teams, six of them have gone under 63.5 points, but because the public only remembers the final score, this number remains high. There is no home team in this rivalry, but interestingly, when Oklahoma is the designated visiting team, the Longhorns have covered, and the total has gone over in each of the past four such games.
Historically, the underdog has been the pick in this matchup when talking spreads. Texas might be irritated about its history against the Sooners on the field, but at the betting window, Bevo has been making bank off its rival: the Longhorns have covered in seven of the past nine matchups with the Sooners.

Sunny, check. Pleasant temperatures, no check. This will be a hot one in Dallas, with temperatures pushing into the lower 90s at kickoff and only getting worse. The wind might help a little, though; it’ll blow at 14 miles per hour going south.

This is strength on strength, as Texas’ outstanding ground game will try to get the clock moving and grind out yards against a tough Oklahoma run defense. The Sooners just haven’t impressed me with their offense, and I have the feeling that this is Texas’ time to get back to where it thinks it belongs. With Oklahoma looking pedestrian, give me the Longhorns. Bet your week 6 college football picks for FREE by taking advantage of a 100% REAL CASH bonus on your first deposit of $100 to $500 at GTBets!