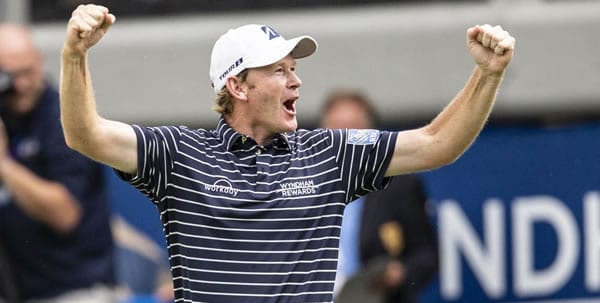 The PGA wants each Tour event to have a big time feel and that is often dependent on the field strength. Early season events are routinely full of eager rookies and vets looking to jump start their seasons but the FedExCup format has incentivized top stars to make at least a few fall stops. More and more big names are starting their seasons in September rather than January and pending captains picks on national teams are also in play. All of those stars have aligned this week and The Safeway Open will boast the strongest field in tournament history. Justin Thomas and Patrick Cantlay headline the field with Francesco Molinari, Bryson DeChambeau and Hideki Matsuyama also expected to contend. Phil Mickelson and Jim Furyk are here to represent the greybeards with notable invites including John Daly and Tony Romo also along for the ride. Kevin Tway needed overtime to win here in 2018, marking the fifth time the Safeway has gone to a playoff in eleven years.

The North Course at Silverado has had a few stints as a PGA host and the 7,203 yard, par-72 layout has few intersting elements to test the pros. The design has a parkland look and adds some flavor with double-doglegs and interesting sightlines. The finish is one of the dramatic on Tour with par-fives at #16 and #18 so plenty of things can happen down the stretch. No player has won here by more than two strokes so expect another close finish and every Safeway winning total has been between 14 and 18-under par.

Each week, we take a look at the online betting sites and highlight the best values on the board. We make a short, middle and long odds pick to win and breakdown a couple of head-to-head matches that are floating around the various golf betting outlets. Odds to win and pairings come courtesy of the board at Bovada. Here are our picks to win the 2019 Safeway Open.

Scott is getting an early start to his 2019-20 season and he is just a bit more than a month clear of finishing the FedEx playoffs with 5, T9 and T6 finishes. He notched a top-10 in half of his starts on Tour last season and you should always look to those guys that are in contention more often than not. He finished last year ranked 30th in greens hit and another top-30 rank in putting helped bring top-10 marks in birdies and scoring average. Scott was 3rd in total strokes gained so there are no holes in his game and he should be able to pick up right where he left off as we finished up the summer. For those looking to bet on Adam Scott in a more conservative fashion, you can back him in head to head matchups vs. Bryson DeChambeau at -1.5 +105 and vs. Sung jae-Im at -1.5 -125 (I’m betting this one) at MyBookie Sportsbook. Credit cards work there and you get a nice 100% bonus up to $1000 in free loot added to your account!

Snedeker had a relatively quiet season with just one runner-up finish punctuating his 2019 record but he remained consistent with only three missed cuts in 27 starts and that runner-up was at The Safeway. He started off last week with a pair of 69’s before falling back on the weekend but he showed enough to think he can play well at Silverado as he did last year. Brandt finished last year as the 12th ranked putter in terms of strokes gained and he also ranked 3rd in strokes gained around the greens. He was 21st in scrambling and 8th in sand saves to power that greenside rank and that ability keeps things on track, even if the approach game is sputtering. Sneds looks like he has a handle on the course and this event has been kind to veterans in years past.

Reavie has a similar profile to Snedeker but you get some more value with this pick. Chez was able to put it all together while winning the Travelers last year and he is a perfect 6-for-6 in cuts made at The Safeway. He led the Tour in fairways hit last season and turned in a top-25 scoring mark with above average stats in everything outside of driving distance. Silverado doesn’t require a long tee ball so Reavie won’t lose any ground there and there is enough target golf from the tees to suggest he may even gain some strokes with that control-first approach. Reavie isn’t flashy but he could easily grind his way to the top this week. Some interesting wagers revolving around Reavie include:

Lefty is riding his name status in this one as Howell had as many top-25 finishes last season as Mickelson had made cuts. Phil’s best moment of 2019 might have come in Vegas by beating Tiger as his season was less than memorable with several missed cuts and missing out on the Tour Championship. Mickelson has fared well here in years past with a T3 last year and a T8 the year prior but that is about all he has over this opponent. Howell hits more fairways, finds more greens and even putts better than Mickelson when looking at last years stats. He is nearly 100 spots ahead in scoring average with very similar birdie numbers, meaning Howell is also less mistake-prone. He even out scrambles Lefty and that was a category Phil used to own on Tour. Those advantages aren’t slight by the way as Howell is 75-100 spots better than Mickelson across all those stats. Maybe Phil has some magic left just ahead of 50 years old but I’m not getting my money in on him.

Value is such a huge decider when so little separates elite talents on Tour and Hideki as a +135 underdog is tremendous value for a player that could easily win the tournament this week. Thomas did win this pairing in each of the three FedEx playoff events but he did not run away with any win againt Matsuyama and each has a win against the other in the last two Safeway Opens. Thomas is 2nd in overall tee-to-green but Matsuyama is 3rd and the margins are similarly tight in birdies, scoring and total strokes gained. Marks in the plus column for Hideki include a slight edge in putting and scrambling with both potentially decided a match a tricky Silverado course. Thomas is always going to be a tough player to beat but Matsuyama is too talented to ignore.