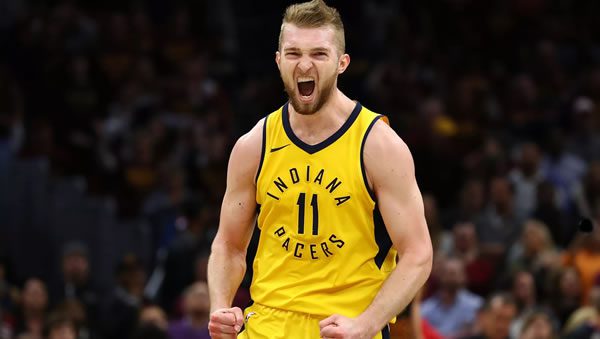 The Indiana Pacers enter today’s game having lost 4 straight games. As of late, the Pacers have struggled to pick up wins, having won just 3 of their past 10 games. As the road team, the Pacers travel to New York with a negative plus-minus of rating -3.8 points. Overall, the Pacers are ranked 14th among NBA teams with an even point differential. Among NBA teams they have played the 14th toughest schedule.

In terms of betting, Indiana has covered the spread in exactly half of their games. Their season-long plus-minus against the spread is -0.6.

On offense, the team’s leading scorer is PF Domantas Sabonis. So far, Sabonis is averaging 18.44 points per game.
This output places him 2nd in his position group. Sabonis is also the team’s best rebounder at 12 boards per game. The Pacers’ best three-point shooter has been Justin Holiday, connecting on 2.48 shots from downtown per game.

The New York Knicks enter today’s game, having lost 2 straight games. Even though the Knicks are on a losing streak, they have an above .500 record in their past 10 games. Going 5-5. This has come while playing 23rd toughest schedule.
As they take on the Pacers at home, the Knicks have a negative home plus-minus of -3.0 points. Overall, the Knicks are ranked 21st among NBA teams in point differential (1.7).

For bettors, taking the New York Knicks to cover the spread has been a losing bet as they have covered in 43.20% of their games. Their season-long plus-minus against the spread is -2.7.

On offense, the team will need to find additional scoring options as Julius Randle is on the Health And Safety Protocols List. One candidate is New York’s best three-point shooter, Evan Fournier, connecting on 2.53 shots from downtown per game.

Heading into this game, the New York Knicks are the 28th ranked team in possessions per game. Even with their slow tempo, the team still ranks 8th in three-point attempts. On the other side, Indiana also prefers to play at a slow pace. However, unlike their opponent, they prefer to work the ball inside, ranking 14th two-point field goal attempts.

As the season has progressed, New York has been able to improve the quality of its defense, moving up to 7th in points allowed per game. However, Julius Randle is a key component of this unit as he plays solid interior defense and prevents second chance opportunities. Look for Indiana to have a big game inside as Domntas Sabonis should have his way with a depleted Knicks unit.

Tonight’s game with between the Pacers and Knicks will be their 3rd meeting of the season, with Indiana leading the series 2-1.

How the Public is betting the Pacers vs. Knicks

60% are betting the Pacers against the spread.

New York comes into this game struggling to figure things out without Julius Randle. Throughout the year, Randle has been the team’s most consistent scorer while providing interior toughness. Look for Domantas Sabonis to carry his team to a big road win over the Knicks. Question: Does your bookie make you lay -110 odds (or more) on your bets? Did you know that you could be laying only -105 at BetAnySports? Making the switch to reduced juice sports gambling will save you THOUSANDS of dollars! Get on it!

My top prop bet of the night is to take Domantas Sabonis to finish with a double-double. Look for Sabonis to easily surpass his totals in both scoring and rebounding.