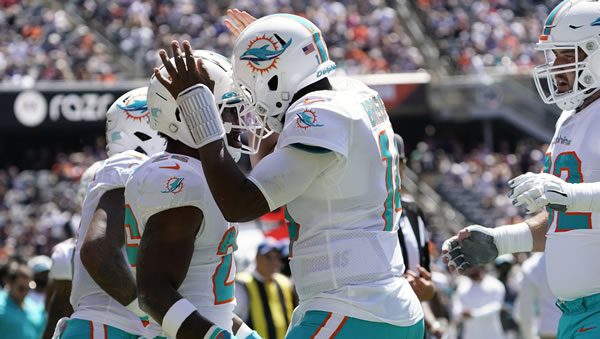 The Indianapolis Colts take on the Miami Dolphins in AFC action from Hard Rock Stadium on Sunday. Miami gave it a good go on Sunday, taking a 14-0 lead and then having to come back to send it to OT against the Raiders, eventually falling, 31-28, in the extra period. For Indianapolis, they were beaten on the road, 25-16 by the Titans, falling to 0-3 and really needing a positive development in a major way. Can they get one on the road again this week? Or will Miami even their ledger at 2-2? Let’s break it down!

These teams have an air of similarity. Both teams have found cementing a quarterback to be elusive. They both have backfields with multiple weapons. But each team’s aerial crew is looking hard to find stars, with no real established contributors as of yet. Both teams had success last season, with Miami showing some upward mobility at 10-6, with Indy making the playoffs. But at a combined 1-5, neither team has been able to resume that kind of success in 2021.

But alas, there are key differences among these two teams. The Colts are much better in the trenches. Their offensive line leaves Miami’s in the dust, but it hasn’t really manifested into offensive production. They’re also stronger along the defensive front. And Miami needs to overcome their deficiencies in the trenches with a backup quarterback, starting Jacoby Brissett, who was once behind center for the Colts. Miami has a much better secondary. And with both teams facing QB issues, with Miami starting a backup and Indy struggling with first-year Colts QB Carson Wentz, who is banged up, a nice running game would help, but neither has been able to really spark that part of their game.

Which Offense Can Get it Together?

Both teams are struggling from this vantage point and for different reasons. For Miami, they’re handcuffed for a variety of reasons. One is a bad line that doesn’t do much to protect their QB and hasn’t been great in springing the run. There is a cabaret of decent ball-catchers but no spelled-out roles, more of just a mish-mosh of different contributors. And now, with Tagovailoa out, they lack continuity, working with an experienced backup in Brissett, but one who struggles getting the ball down the field. Getting Will Fuller in the mix last week could pay off, but they’re struggling to gain any meaningful foothold. Their 28-point total on Sunday brought their season total of points to 45 total points. It’s not a pretty picture.

Wentz has shown some guts this season for Indy, working through injuries and actually not doing horribly with what he has. Running back, Jonathan Taylor hasn’t been able to really do his thing with Indy playing from behind most of the time this season. But they’ve still been showing a little more life on this side of the ball. The line hasn’t been as good as advertised, not springing big run-plays and sometimes leaving Wentz unprotected. But the run is at least showing minor signs of life, things that could take hold in a game where they’re not likely to abandon the run while falling behind. Maybe Wentz will be a little healthier, and the offense can show a little life. At 0-3, the urgency will be there. The thinking on that sideline is that if they can’t right the ship against a dicey-looking Miami team, and they fall to 0-4, it really sets up for a rough season. I’d be expecting them to fight hard to avoid that.

The Miami defensive front isn’t a group likely to be pushed around easily. They have a tough matchup against the Colts’ front this week, but they’ve been showing a little more menace and pressured Carr last week pretty well in spots. A pick-six was critical and helped take some pressure off an offense that was struggling in spots late. But in a game like this, a big defensive play could turn this game on its head. It could come from a secondary, which, at this point, is the crown jewel of the Dolphins team. With a flat passing attack, Indy is facing a tough aerial matchup. They might have to depend on Jonathan Taylor and Nyheim Hines.

Hazards Betting on Either Team

This might come down to which team’s shortcomings you can better stomach. When plunking a bet down on Miami, you’re taking a team with some defensive upside but an offense that just doesn’t put out and now is working with a backup in Brissett who is competent without ever really being very good. They’re playing an Indy team that has given up 25-27 points in all three of their games, but that was against Seattle, the Rams, and the Titans. They could be in better shape against Miami, a team that has 45 points on the whole season thus far. But that Indy offense is laboring and against a Miami “D” that should show some resistance at home, what are their prospects realistically?

This game has the looks of a grind where the result is really up in the air to a certain degree. Part of me wants to defer to Indy’s urgency, but being in the middle of a three-game road stretch after dropping their first two at home puts them behind the 8-ball. Miami is at home in a somewhat manageable spot. In fact, after both teams played three pretty tough games, this matchup could give way to better showings from both teams now back in their own wheelhouses where the level of difficulty dips for both. I see Miami’s defense giving Wentz and the Colts more problems this week, with the Dolphins edging them at the wire for the win and cover at home. I’ll take the ‘Fins.

Loot’s Prediction to Cover the Point Spread: I’m betting on the Miami Dolphins minus 2 points. Bet ALL your Week 4 NFL picks FREE by taking advantage of a 100% REAL CASH bonus on your first deposit of $100 to $1000 at Betnow Sportsbook!