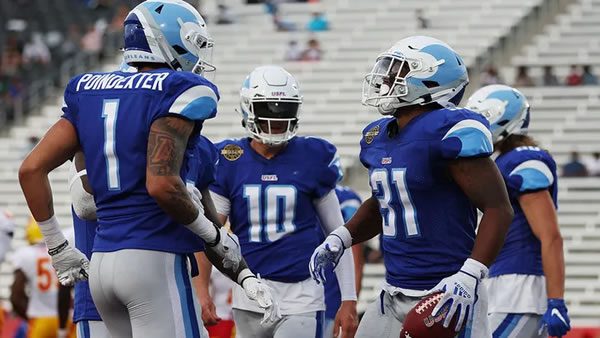 With two division losses to their name, the Gamblers are in serious danger of falling out of the playoff race before they even get a chance to be in it, as they’re the lone team in the South Division with a losing record. It’s looking like the balance of power in the USFL resides in the South, and although Houston is doing a decent job of staying in games with its defensive work, its offense hasn’t really been cashing in with its opportunities.

New Orleans fell back to earth a bit in Week 3, as the Breakers followed up a 31-point destruction of Tampa Bay by only managing 13 points against Birmingham. For the first time all season, the Breakers ran into a team that they couldn’t overwhelm on offense and didn’t handle it particularly well, losing the lead in the fourth quarter and watching a 13-10 lead turn into a 22-13 defeat. This still appears to be the second-most talented team in the USFL, but after losing a lead in such a late manner, will the Breakers be ready to bounce back or allow the defeat to beat them twice?

The Gamblers were supposed to be a powerful spread offense, but the exact opposite has happened, as it’s been the passing offense that’s killing Houston’s chances. The running game was highly effective against Tampa Bay, as Mark Thompson carried for 147 rushing yards and Houston’s first rushing touchdown of the season in Week 3.

But Clayton Thorson isn’t doing the job as Houston’s quarterback, tossing five interceptions against five touchdowns. The result has been an offense that puts up plenty of yards but doesn’t put enough points on the scoreboard. That’s a strange thing to say about a team that has averaged 27 points per game over the past two weeks, but the turnovers have often left the Gamblers’ defense in a tight spot. Houston is only plus-2 in turnovers because of its opportunistic defense, as only Tampa Bay has turned it over more than the Gamblers’ five interceptions. With the Breakers leading the USFL in interceptions with four, Houston’s probably going to have to find a way to get the ground game going if it’s going to stay in this one.

If New Orleans is going to get 80 offensive plays, it’s got to get more out of its running backs. Jordan Ellis carried the ball 25 times but gained a mere 90 yards and didn’t score, which forced the Breakers to go to the air 47 times against Birmingham. That’s not where New Orleans wants the game to be anyway and certainly wasn’t against the Stallions’ highly-rated passing defense. Kyle Sloter is an effective USFL quarterback, but that’s when he’s throwing it around 25 to 35 times a game, not making 47 attempts.

The good news for the Breakers is that against Houston’s weak defense, anything they try is likely to work. The Gamblers rank dead last against the pass with 209 yards given up, and only Philadelphia is worse against the run. Over the past two weeks, Houston has given up 30 points per game, and the Gamblers’ overall number of 22 points per game would be higher if they hadn’t already played Michigan and its severely challenged offense.
New Orleans can move the ball effectively through either the run or pass and when it controls the line of scrimmage, it’s very tough to defeat. The Breakers looked good on the ground against Tampa Bay and Philadelphia, and Houston doesn’t look like it’s going to be capable of slowing down Ellis on the ground.

The worm might be turning in the USFL, as the underdogs went 3-1 ATS and 2-2 SU in Week 3, with Birmingham and New Jersey both winning outright and Houston landing a cover. The under was also a strong play in the season’s third week, as both North Division matchups landed under the total (although New Jersey-Philadelphia missed by just a half-point), and Birmingham was able to stifle New Orleans and land an under in that game as well. For the season, the favorites are 9-3 SU and 8-4 ATS, while the under is 8-4 for the year.

Heat could be an issue in this game, as temperatures will tick up to 86 degrees around kickoff without much in the way of clouds. Wind won’t be a factor; it’s expected to blow at just six miles per hour to the north.

New Orleans has shown the more consistent offense this season and should be able to win this battle in the trenches. If Houston could stop shooting itself in the foot, it might have a reasonable chance against the Breakers, but the Gamblers have really struggled to stop anyone other than themselves and Michigan this year.

This feels like a game where Houston gives away one possession too many and leaves itself on the wrong end of the number yet again. I’ll take the Breakers for the cover.