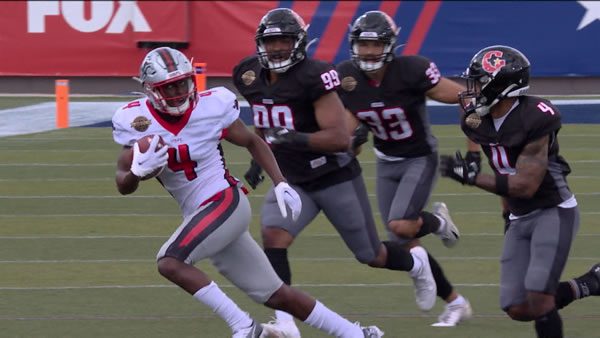 Tampa Bay came in as the expected favorites to win the USFL’s first title, but it’s Birmingham that has emerged as the best team in the early going, as the Stallions have taken down both the apparent best team in the North Division in New Jersey and their perceived strongest competitor in the South in New Orleans. With an offense that’s averaging 27.7 points per game, it’s hard to find a team who’s figured out getting on the same page better than Birmingham.

On the other side of the field, the Bandits are probably fortunate to be 2-1. They managed to escape Houston because of some solid special teams work, which allowed them to overcome a nine-point fourth-quarter deficit and emerge with a one-point cushion. But the run game is still suspect, and the fact that the Bandits gave up 26 points to a Houston offense that struggled to move the ball against Michigan and New Orleans can’t be an encouraging sign for Tampa Bay’s defense. With both teams giving up a fair amount of points, this could be one of the higher-scoring matchups of the USFL’s first season.

The good news for Tampa Bay is that the Bandits have a legitimate quarterback in Jordan Ta’amu. Ta’amu was a solid option for the St. Louis BattleHawks of the XFL in 2020, and in this quarterback-starved league, he’s emerged as one of the better throwing options in the league.

What’s more, he’s got a genuine connection with wide receiver Derrick Dillon, who caught six passes for 124 yards and a touchdown against Houston. Dillon didn’t drop a single pass in Week 3, catching all six of his targets and giving Ta’amu a reliable option to work with in the passing attack. The Bandits’ big problems are two: they don’t yet have a decent second option at wide receiver, and their running game doesn’t scare anyone. Rashard Davis looked like he could become the No. 2 in catching all four of his passes last time out, but he didn’t get much in the way of yardage, gaining just 57 yards in the win. Still, that was more than double what anyone else from the Bandits managed through the air.

Tampa Bay’s problems really begin with the run game, as Juwan Washington was about the only runner who did much in the win over Houston. Even Washington struggled, gaining just 65 yards on 15 carries and scoring a touchdown. The Bandits aren’t going to be able to pass their way past anyone unless teams respect their running game, and right now, nobody has reason to care about the Tampa Bay backs being the ones to do the damage.

The biggest thing that Birmingham has going for it is also the simplest: the Stallions do not shoot themselves in the foot. The Stallions lead the league in turnover ratio, boasting a margin of +3 takeaways, which has been key in maintaining their status as the strongest team in the USFL.

It also hasn’t hurt that J’Mar Smith both makes good decisions with the football and spreads the ball around well enough to put up points. Nor does it hurt that the Stallions are one of the few teams in the USFL that does not have kicking problems. Brandon Aubrey hasn’t missed a kick this season, a rarity in a league where kickers left and right are having trouble putting the ball between the goalposts.
Plus, unlike Tampa Bay, Birmingham’s opponents do have to respect the Stallions’ rushing attack. CJ Marable hasn’t been great by any means, but he has scored a pair of touchdowns on the ground and given opposing defenses something to think about in addition to both Smith’s arm and legs. More importantly, having him on the field has allowed Victor Bolden to find space in the defense to show off his connection with Smith.

The worm might be turning in the USFL, as the underdogs went 3-1 ATS and 2-2 SU in Week 3, with Birmingham and New Jersey both winning outright and Houston landing a cover. The under was also a strong play in the season’s third week, as both North Division matchups landed under the total (although New Jersey-Philadelphia missed by just a half-point), and Birmingham was able to stifle New Orleans and land an under in that game as well. For the season, the favorites are 9-3 SU and 8-4 ATS, while the under is 8-4 for the year.

The good news is that temperatures will be a comfortable 80 degrees on Saturday. The bad news is that kickers might have a bit of a tough task on their hands, as wind will blow at 12 miles per hour west-northwest, with gusts of 30 mph winds happening throughout the day. Given that these teams tend to place a value on kicking (Birmingham by cashing in on short plays and Tampa Bay by flipping the field), the wind could push the total under the number.

When you think of a pair of teams that prefer to thrown the ball like the Stallions and Bandits, you’d expect the over to be a solid bet. However, the kicking game is a real concern this week, as the Bandits lead the league in punting average and are experts at flipping the field.
But flipping the field isn’t going to work against Birmingham as well as it did against Pittsburgh and Houston. You have to move the ball to beat the Stallions, and the Bandits haven’t shown that they can. Give me Birmingham.